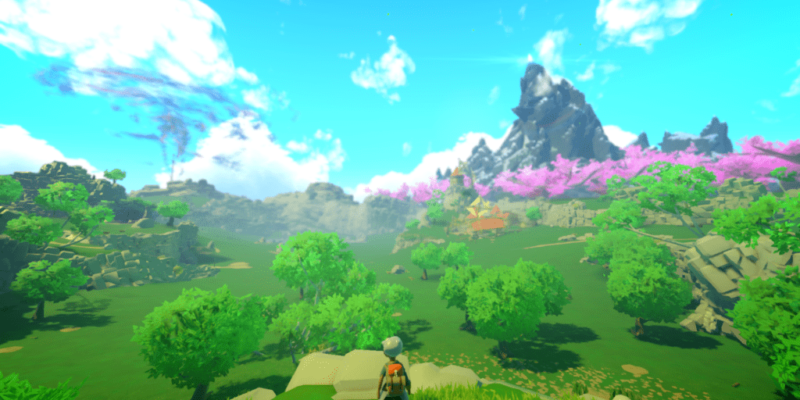 Yonder: The Cloud Catcher Chronicles is a game that synthesises pure pleasantness from a well-trodden set of mechanics. From a colourful open world that’s as rounded as a pair of safety scissors, to its unique cast of animal pals, everything is thoroughly lovely. The only hint of darkness comes from an encroaching purple fog known locally as ‘murk’ and, ultimately, the reason for that murk’s existence (revealed at the narrative climax, so I’ll not spoil that).

There’s no cynicism. No secret evils harboured by the friendly villagers. Even the murk itself doesn’t seem to be causing that many problems in the grand scheme of things (although, admittedly, it is said to be spreading). Your job in Yonder: The Cloud Catcher Chronicles is really just to nudge what’s already a near island paradise into a full time utopia. 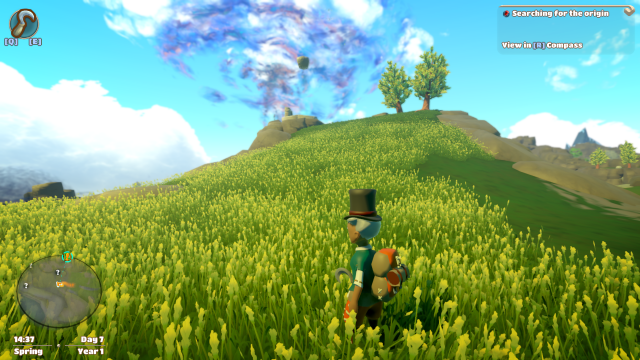 Granted, you do start the game in a shipwreck. It’s a an extremely gentle shipwreck though. Nobody (besides the ship) gets hurt, and within about five minutes your male or female protagonist (there’s a straightforward character creator) is running about in lush, green grass beneath soft sunshine.

Yonder is a fine looking game. Chubby, bison-like creatures called Groffles waddle around its plains, while some of the dwellings could pass for delicious cakes. Chocolate piping around the windows, marzipan for walls, and red licorice roofs.

Snow-swept mountains, dusty deserts, and humid forests are among eight different environments; each one styled in the same charming manner. It doesn’t take a long time to hoof it from one end of the island to the other (when I tested, it was about five minutes), but that trip will always include plenty of visual variety. 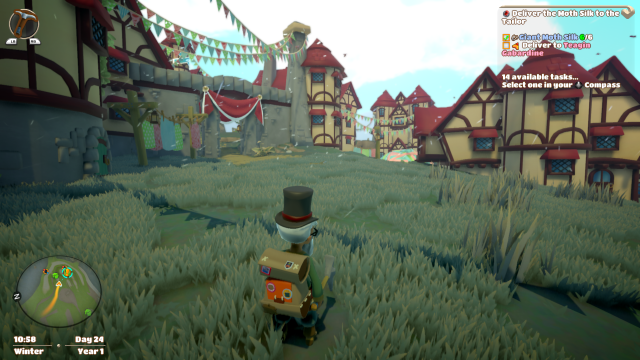 This town cannot get enough of bunting.

There isn’t really a fast travel system in Yonder (besides a couple of portal-type shortcuts to specific points), so the island’s compact nature isn’t too claustrophobic. It also employs a few geographical tricks (things like the tactical placement of sheer cliff faces) to stop players taking a direct route everywhere. This mostly adds to the sense of exploration, but it does feel a bit artificial around the game’s mountainous region, where it pushes you up certain defined pathways.

Relative ease of movement around the world is important, because Yonder will send you all over the place. Either as part of the main 4-5 hour narrative quest-line, or in search of resources for tasks of your own undertaking.

Those tasks boil down to either crafting things, or looking after a farm or two (for which you also need to craft things like animal pens and fodder troughs). Crafting recipes are obtained from one of the seven different professions in the game. If you join the chefs, you’ll get a bunch of food types to make; if you join the constructors, it’s arch-ways and structures. There’s no limit on how many guilds you can be in at once, and getting in usually involves a quest to gather up relevant resources.

That’s achieved by following the Officially Codified Minecraft Methodology of Resource Acquisition, or … OCMMRA. That acronym needs a rethink. Anyway, you know the procedure. Use an axe to chop trees for wood, pluck vines to make twine. All that stuff. 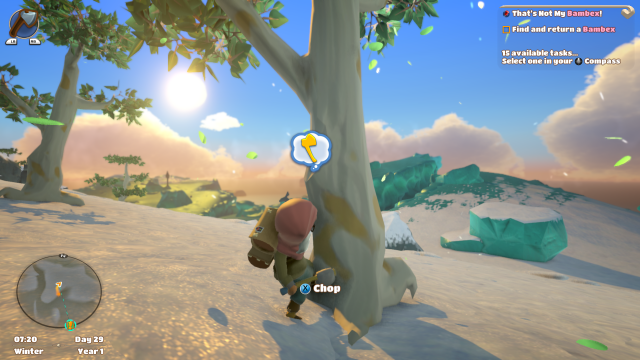 Chop chop, haven’t got all day.

Yonder’s persistent problem is that all of this is very guided and falls within quite rigid parameters. You can build bridges to ease your travel to different parts of the land, but only in pre-designated spots. There’s a little bit of freedom when placing buildings on your farm, but the building placement doesn’t actually seem to matter and there are a pretty limited set of structures in any case. It includes a lot of popular features in its tranquil world – crafting, farm management with cute animals, fishing – but on a level that feels relatively superficial.

After finishing up the main story players are invited to stick around and continue their activities in the world. Besides luring more adorable animals to the pens of perpetual petting (a noble goal, it’s true), the remaining actions are largely a closed crafting loop. The economy in Yonder is based on bartering (there is an ‘Old Kingdom’ currency, but the islanders appear to have transcended beyond mere finance), so everything you make, or pilfer from the land, can be exchanged for more materials.

And that’s just about it. You can make more things to swap for more things, to potentially create more things, for the purpose of … swapping them for even more things. ‘Mastery’ in each of Yonder’s professions is achieved by crafting large amounts of goods, which rather betrays the fact that the game feels crafting in and of itself is a desirable goal. 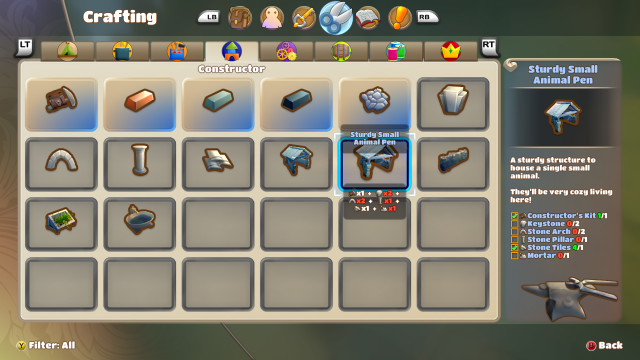 There’s really no shortage of crafting.

Outside of the crafting, Yonder exhibits one or two moments where using observation and experimentation out in its open world yields useful (or just enjoyable) results. There a few unguided environmental puzzles that generally reward the player with another Sprite; necessary for fighting back the murk. It’s also rewarding to figure out how the quick-travel portals are linked to the game’s day-night cycle.

These instances of ‘organic’ interactivity with the world are all quite smart, but there aren’t enough to make an extended stay beyond the end credits feel worthwhile. Hidden, collectible cats, cute as they are, just aren’t enough.

Developers Prideful Sloth have committed themselves to a decent PC version, featuring a reasonable spread of graphics options (shadow quality slider, ambient occlusion settings, and so on). The keyboard and mouse options are pretty well implemented too. My main complaint would be a lack of hotkeys, meaning players have to laboriously scroll through their equipment options (a problem on the gamepad too, but the keyboard has a solution that’s not being employed). Keybindings are custom too, so you can alter the controls. A pair of camera sensitivity sliders are helpful as well. Here’s a gallery overview of the settings (click for larger).

Yonder’s world is an impressive and stylish creation. The variety of environments squeezed into its compact island make for an enjoyable, exploratory romp for as long as that novelty keeps its hold. But once the main 4-5 hour quest is done, you’ve seen the extent of what the game has to offer. That wouldn’t automatically be a problem, except the crafting and farm ownership aspects are too superficial to act as a compelling reason to return. As a result, this is a short and undeniably sweet title which lacks the depth of its contemporaries.

A pleasant experience from start to finish. But that conclusion comes rapidly, and the post-game crafting and farming activities are too light to be truly compelling.