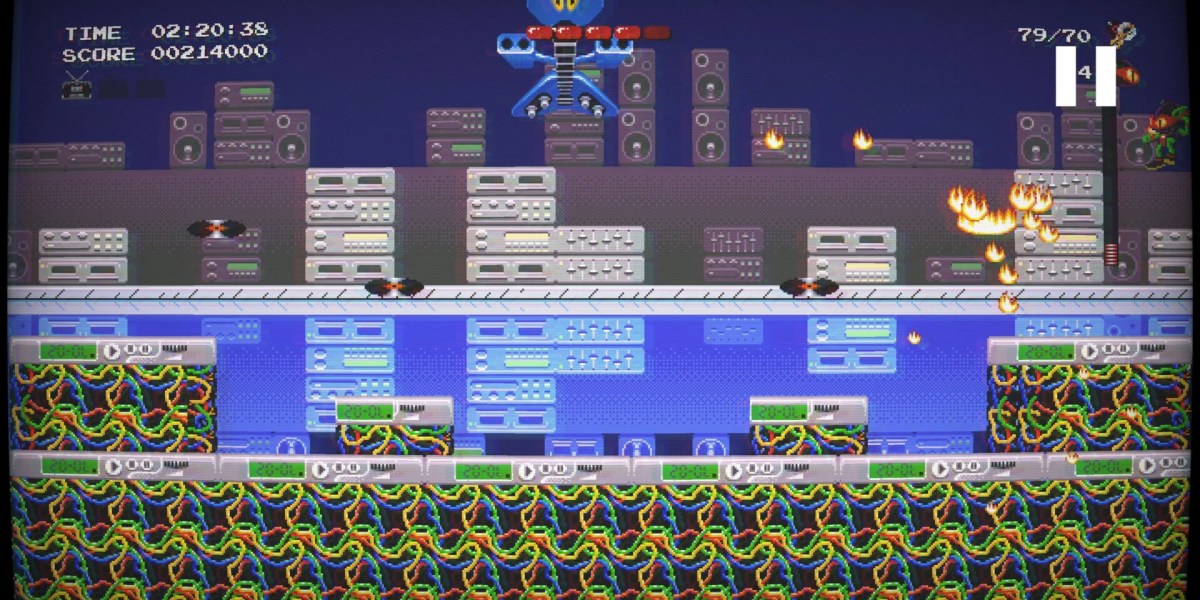 For fans of a certain era of gaming, the name Zool actually means something. While I will totally cop to not being one of these individuals, there was a large audience, especially those on the Amiga, that saw the series as the gold standard in mascot platformers. While its numerous ports and offshoot incarnations weren’t as well received, the franchise still got a sequel. Who knew? Fast forward nearly thirty years, and the character is making a triumphant return to PC in Zool Redimensioned. Does its well-documented difficulty hold up under the scrutiny of high definition? Or should it have stayed in the time capsule, buried in your childhood backyard?

To fully understand what people were up against when playing one of Zool’s original incarnations, you need to experience it firsthand. Fortunately, in a well-appreciated dose of foresight, Zool Redimensioned includes a SEGA Genesis emulator, exclusively used to play one of the original versions in all its colorful glory. It didn’t take long for me to wholeheartedly agree that the game was more challenging than trying to purchase a PlayStation 5.

Part of what made the gameplay so challenging was the smoothly panning, brisk speed of traversal and the limited field of view. Large, beautiful sprites took up significant real estate on the screen, further limiting the visibility. This made split-second reactions necessary, because enemies would appear without notice and go for the jugular at every opportunity. Sure, these visual obstructions may have been the byproduct of technical limitations, but the original team over at Gremlin Graphics took the lemons they were handed and made a goddamn hand grenade.

As you might imagine, the advent of the HD era has made previous technical roadblocks a thing of the past. Zool Redimensioned pulls the camera back drastically, revealing the world in its full, ridiculously absurdist glory. Unfortunately, while the new perspective feels far more modern and properly in tune with traditional platformers, it ends up neutering the difficulty, irrevocably. Suddenly, enemies that used to pop out from nowhere, moments before making contact, can now be seen coming from a mile away. I’m not sure if this was intentional, but these are the sorts of things that need to be considered when remastering a beloved experience. 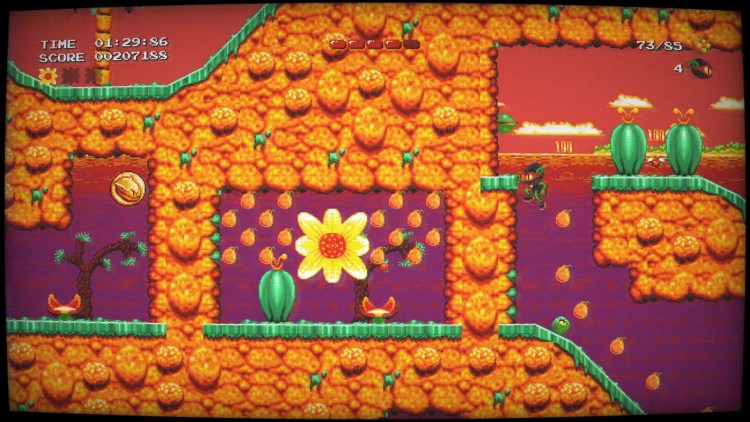 Another aspect that made the original so difficult was the pinpoint accuracy needed to traverse the map, especially when jumping. The single bounce approach left little room for error when traveling at high speeds. The sequel addresses this additional challenge by, once again, neutering the gameplay to comical levels. Featuring a double jump that you can utilize at any time, the remaster adds the ability to course correct in flight. Again, this brings Zool Redimensioned in line with more modern expectations but at the cost of authenticity.

Now, it may sound like I’ve done nothing but hate on Zool Redimensioned so far, but honestly, there haven’t been any true negatives mentioned, aside from becoming excessively easy. I found the emulated version overwhelmingly unapproachable, so catching a break or two didn’t break my heart. For this reason, specifically, you can imagine my pleasure learning that “Game Over” screens no longer return you to the main menu. Instead, you instantly restart with a full battery of lives, at the beginning of the stage. 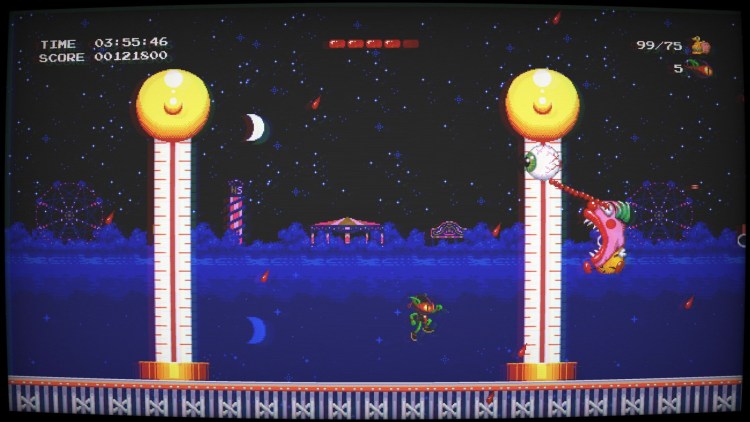 There were also a handful of more minor tweaks, such as checkpoints that activate automatically. Instead of needing to make a conscious effort to stop and interact with checkpoints, you can now blow through them with reckless abandon. This also has the desirable side effect of greatly increasing the potential speed of gameplay. In another case of throwing us all a bone, the health bar has also been increased from three hits to five.

One last curious change is to object permanence. You’ll need to regather any items gathered after hitting a checkpoint. This isn’t the end of the world by any stretch of the imagination, but it was a curious, yet very deliberate design choice.

Fortunately, those searching for a taste of the original’s more hardcore-skewing gameplay can dive into Ultimate Ninja mode. Remember all those modernization tweaks I was referring to previously? Throw a majority of them out the window. Damn near all of them have been rolled back in this alternate and more authentic take on the Zool experience. That said, the camera still mirrors the camera from the standard campaign, resulting in a similar drop in difficulty across the board. The primary change with this mode is that you’ll need to meet pre-determined collectible counts to progress to the next stage. In the main campaign, these counts are visible, but not enforced. 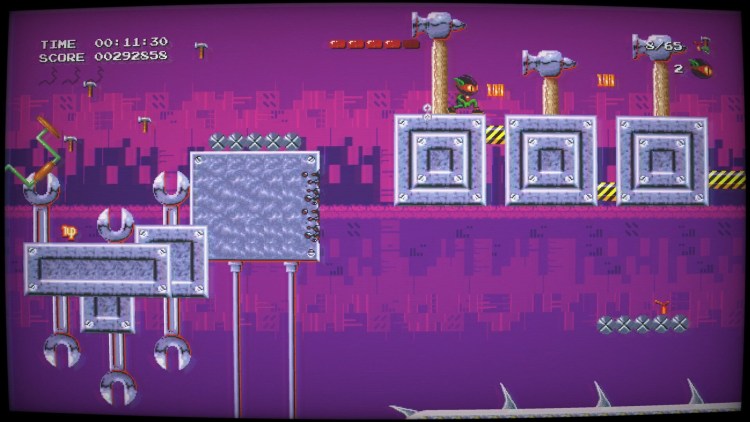 To call Zool Redimensioned a remaster would be a bit of an exaggeration. I mean, yes, the visuals are certainly crisper across the board. However, at a more granular level, it looks exactly like what you’d expect from a game of that era, only in widescreen. Once again, drawing back the camera does make everything appear sharper. I wouldn’t go as far as to say any discernable visual enhancements were made, though. But if you’re hankering for a bit of the retro flare, be sure to enable the visual filter, which injects scanlines and rounded tube tv corners, overtop of the standard presentation.

I like what the development team did with Zool Redimensioned. Taking a proven property and bringing it to a whole new audience of gamers is a noble cause. However, some of the gameplay tweaks introduced, greatly impact the difficulty that was a series signature. If you’re either a lapsed fan or in search of “baby’s first platformer,” you’ve come to the right place. On the other hand, folks looking for a challenge of any significant degree would be better off traversing a different world.

Though a noble effort, the transition to HD has probably done more harm than good. Challenging gameplay has been replaced with a virtual walk in the park, devoid of damn near any difficulty. If you're looking to relive gaming's past, you may be better off with the original.