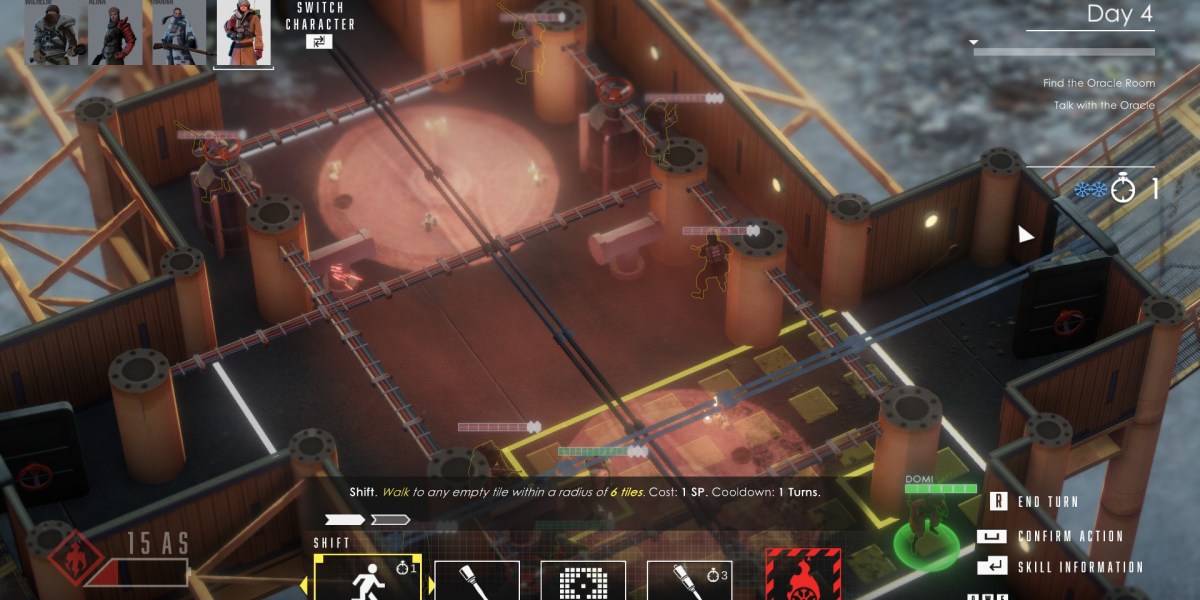 “Do not remind people of a better movie,” is a critical piece of advice for B-movie makers. I’m sure a video game adaptation of that rule would have been useful for Recotechnology, the developer of 1971 Project Helios.

In this title, the world is a frozen hellhole. Amidst all the snow, Emile and Hanna are freelancers working with bandits and raiders. At the same time, Wilhelm and his comrades are defending the Nova project and their plans to bring prosperity with the wastes. They – and others – are forced to band together to find the missing Doctor Margaret Blythe. 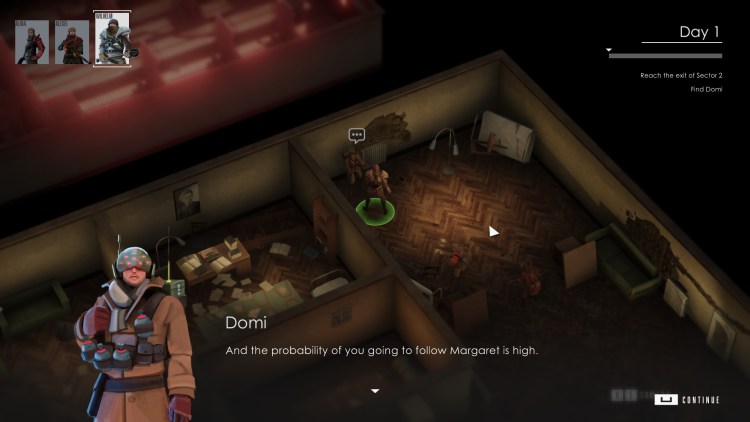 The game features such innovative protagonists as “the nerd who keeps estimating the numerical probabilities of actions.”

1971 Project Helios is not a good game. There’s no way around it. It feels like a clone of Mutant Year Zero: Road to Eden, but without anything that made that game good. It has a very simple combat system: If the enemy is in range, you have a 100% chance to hit it. If they are in cover, it goes down to 50%. They may or may not have a few points of armor to soak the damage. So it’s just like Mutant Year Zero, but the accuracy bounds are cut down to the extreme and the battlefield conditions are much simpler.

Your characters have up to four abilities. One is always “Shift,” which is ESL developer-ese for “Move,” and another is attack. All abilities go on a cooldown immediately after use, so you won’t be able to use both of your action points (called “skill points” here) to move twice. But it doesn’t matter much, since all of the battlefields are arbitrarily limited to about the size of a room.

This also makes active abilities that increase attack range for one attack useless. In fact, nearly half of the skills are trap choices. Good thing that they’re unlocked not by experience, but by inventory items and can be swapped between battles. It’s sort of a mix of Mutant Year Zero‘s team abilities that are unlocked by collecting artifacts and swappable individual powers bought with XP. 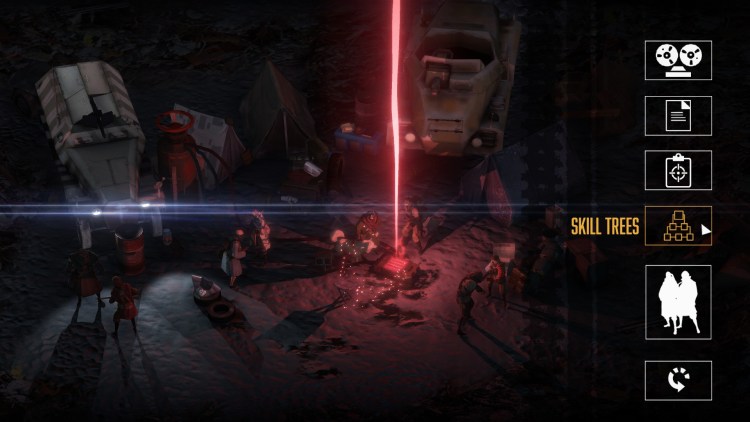 You can, indeed, pet the heckin’ woofer, but that would require playing the game.

For example, overwatch: a useful skill in any XCOM-adjacent gun game. Here? It’s basically useless if your opposition doesn’t have melee troops, as the enemies are entirely content to blast at you from where they are – especially since you can’t affect their cover in any way.

Your starting positions are also static. No matter how much exploration you do or the direction you approach your pint-sized battlefields, once the battle starts, your soldiers will all move into preset positions you have no control over. So when in Mutant Year Zero you had an incentive to move your characters into good tactical positions before GOING LOUD, there’s nothing like that in 1971 Project Helios.

So there are only two reasons to move around the maps: to find more equipment to unlock or upgrade your skills, and to collect Fulgor. What is Fulgor? It’s the “unobtainium” of the setting, extracted from the meteorites that caused the big freeze. From the lore you obtain, you’ll learn that it’s used for literally everything: from energy and metallurgy to food and mutagens. But for you, it has three uses: reviving downed characters, resetting ability cooldown, and “defreezing” health.

To explain that last part: 1971 Project Helios is set in a frozen world. If you find yourself battling outside (which is most of the time), the battlefield may have a freeze rating. This means that any non-immune soldiers will have a portion of their health frozen at the end of the AI turn. Technically, that HP isn’t lost, just frozen, so you can’t heal it with the few healing powers in the game. If you run out of non-frozen health, your character will still die. You may spend some Fulgor to unfreeze your trooper. 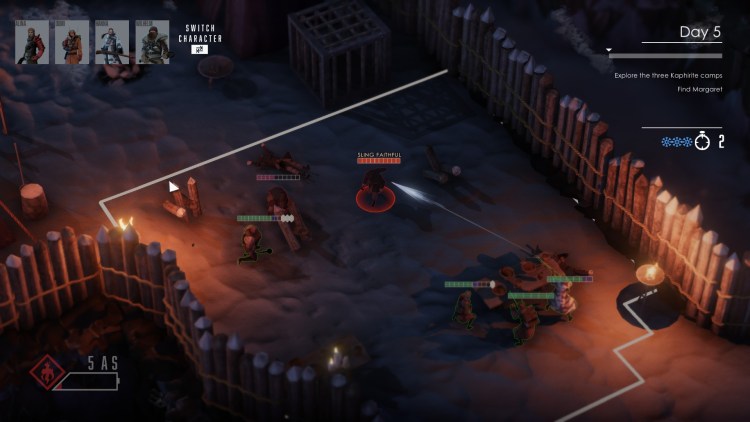 The Fulgur gauge is on the lower left corner and I have no idea why it’s measured in “AS.”

Or you can just let them die. When your character is revived for the first time in a battle, you get half of your health back, and none of it is frozen. It costs 5 Fulgor. Unfreezing? It’s 2 Fulgor per 5 HP in a game where even the weedy characters are rocking about 60 HP. It’s actually more economical to let your characters buy the farm. In fact, reviving is basically the only way you’ll be using Fulgor just because it’s so important.

By the way, that’s the only way the freezing weather impacts your game. There’s no decrease in troops’ effectiveness, no slowdown or weapon jam. It’s essentially a timer biding you to finish the fight faster. This is especially true when you start running into Kaphirites, who are entirely immune to cold.

Not the warmest of greetings

Kaphirites are but one of the three factions on the game; the other two are Wintersohne (the Not-zis) and Scavengers (ye apocalypse bandits). Each faction has a handful of units, the stats and abilities of which you can inspect at your camp after the level in which you encountered them. There’s really not a lot of variety in this game.

1971: Project Helios isn’t a pretty game either. Neither models and textures nor animations deserve praise. In fact, some textures are very low-res even for a game that doesn’t allow you to zoom in. There are some details that would hint at a world where World War II never ended – the main characters ride in a Hanomag and Sd.Kfz. 232 – but nothing is done with it. The biggest impact of it is probably with one of the dumber bugs in the game. 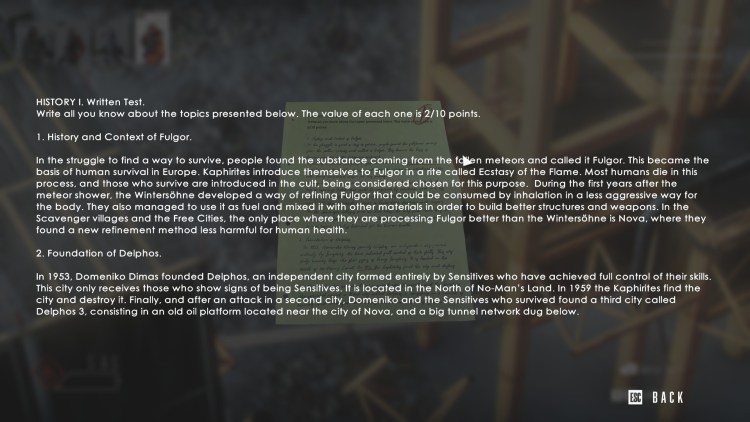 The weak writing in the game exists to reinforce the idea that there’s no world outside of the places you visit and people you need. Nothing exists outside of what the player can touch.

Emile, the protagonist we are supposed to care about (but don’t) has a sawed-off shotgun. When it fires, it ejects about 16 empty shells, which is eight times more than you’d expect. I thought that someone just messed up with the modifiers – shells are after all physical objects – before I noticed a Wintersohne Soldat fire his MP40, ejecting eight casings in a pattern similar to the shells in the shotgun. So if you have an animation for ejection, just slap it on the sawed-off – twice!

There’s also stuff like clipping environment objects, a mission going to Wilhelm’s old home requiring you to take Emile (but not Wilhelm) on the team, and Ame’s dog Ricotta following the leading team member instead of her in the last battle.

As for the sound, the only well-executed part of it is Hanna firing and cycling her bolt action rifle. It’s basically the only thing that brings pleasure in 1971 Project Helios. You know what doesn’t? The damn music that annoyed not only me, but my girlfriend as well. It’s too loud, distracting, and repetitive — not a great experience.

And it’s a good thing that it doesn’t feature any spoken lines. The writing in the game is no better than any aspect of it, so the dialogues are clunky and lacking in sense. The plot of the game in general has basically no emotional weight. The choices you have to make at the end don’t really matter to you, the player, and the end boss… He’s just some rando you have no real reason to hate.

1971 Project Helios is a bad game. It reminds you of a better game at every step and constantly fails to deliver. Every aspect of the game has been carried out more competently somewhere else; none of the novelties are any good. You’ll lose nothing if you skip this — which is not something I can say about playing it.

No aspect of 1971 Project Helios can make it a worthwhile gaming experience. It's not too ugly and it doesn't crash too often, but if those are the only compliments a title can get, you're in deep trouble.