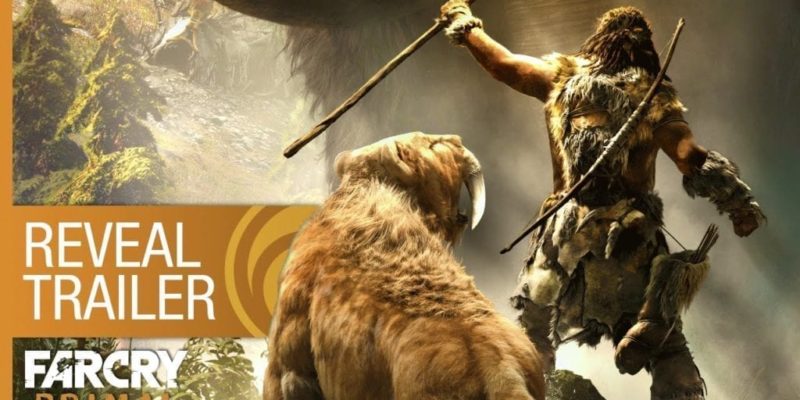 The Far Cry series has grown over the course of the years to encompass many differing mechanics. Things like crafting, to first-person shooter action, right down to a growing skill tree are all features we’ve seen in prior iterations. In addition, the new entries have also continued to become graphically impressive on both console and PC. Today, Ubisoft continues the investment into the franchise with Far Cry Primal.

1. The game will take place in the land of Oros. There is also emphasis on the time frame, falling right in the midst of the Stone Age. There are a ton of possibilities with large plant-life and threats from even bigger mammals. We’ve already seen hand-axes, bows and spears within the trailer. So, things like crude tools, sticks, and bones used as weapons will have you exclaiming, “Bonesaw is ready!”

Take on with Takkar

2. Of course, what is a Far Cry game without a main character? The main character of Primal is a hunter known as Takkar. He is “…the last surviving member of your group.” It has been noted that “he” will be the playable main character in the game. They discuss becoming the Apex Predator, so we can also guess that there will be a potential skill tree to encompass the route to the primal top.

Open up the Oros

3. The game continues on the formula seen in previous Far Cry games. The invitation to “…open-world sandbox gameplay” does something important to the level design. Much like the Battlefield franchise, it creates a feeling of large-scale worlds, and vast scope, while still putting boundaries on the areas in which you travel. Developers walk this line so that the game does not become too vast, or even—boring.

4. Crafting, similar to the systems before it, will utilize items picked up when out in the field. The following is from the release:
“Stalk enemy outposts and plan your attack using weapons and tools crafted from the bones of beasts you’ve killed.”
So, we can be sure that the massive mammoth that was attacked to be taken down in the trailer might produce some items to be looted. Who knows, this could open up a new experience for online modes, or even expansive replay value as you grow your tribe.

Forest backing up into the frigid mountains.

5. The landscape will also be varied. From the release, we can already expect “…redwood forests, harsh taiga, and humid swamps.” If you look closely in the trailer, there is a forest that backs up to a mountainous area with snow peaks. The varying landscapes will no doubt provide prehistoric creatures specific to each habitat.

“The interesting thing about Far Cry is that it’s flexible. So when a team proposed to explore the idea of a Far Cry taking place during the Stone Age, we just said ‘let’s hear it!’ And the more we heard about it, the more we realized how much of a damn good idea it actually was,” said Dan Hay, executive producer, Ubisoft.

Far Cry Primal is slated for release March 2016 on PC. PlayStation 4 and Xbox One will see a sooner release on February 23, 2016. The game is being developed by Ubisoft Montreal, Ubisoft Toronto, Ubisoft Shanghai, and Ubisoft Kiev Studio. Check out the announcement trailer below.