If I were to describe an isometric strategy game where you mine out resources from underground caverns, provide living arrangements and food sources for your denizens, ensure the happiness of your charges, build traps, and train military units to tackle foes, there’s a fair chance that anyone who played PC games in the late 90s would respond “hey, that sounds like Dungeon Keeper 2”.

When condensed down to a checklist of features, Zeal Studios’ A Game of Dwarves does indeed sound an awful lot like Dungeon Keeper 2. It plays somewhat like it too and, for most, this will be no bad thing. What it doesn’t really play anything like is the go-to PC game about dwarves, Dwarf Fortress. The scope and complexity of that (still very much unfinished) title is legendary, so it’s no criticism to say that Zeal’s effort is lacking that kind of depth or that its palette of features appears far more focused. 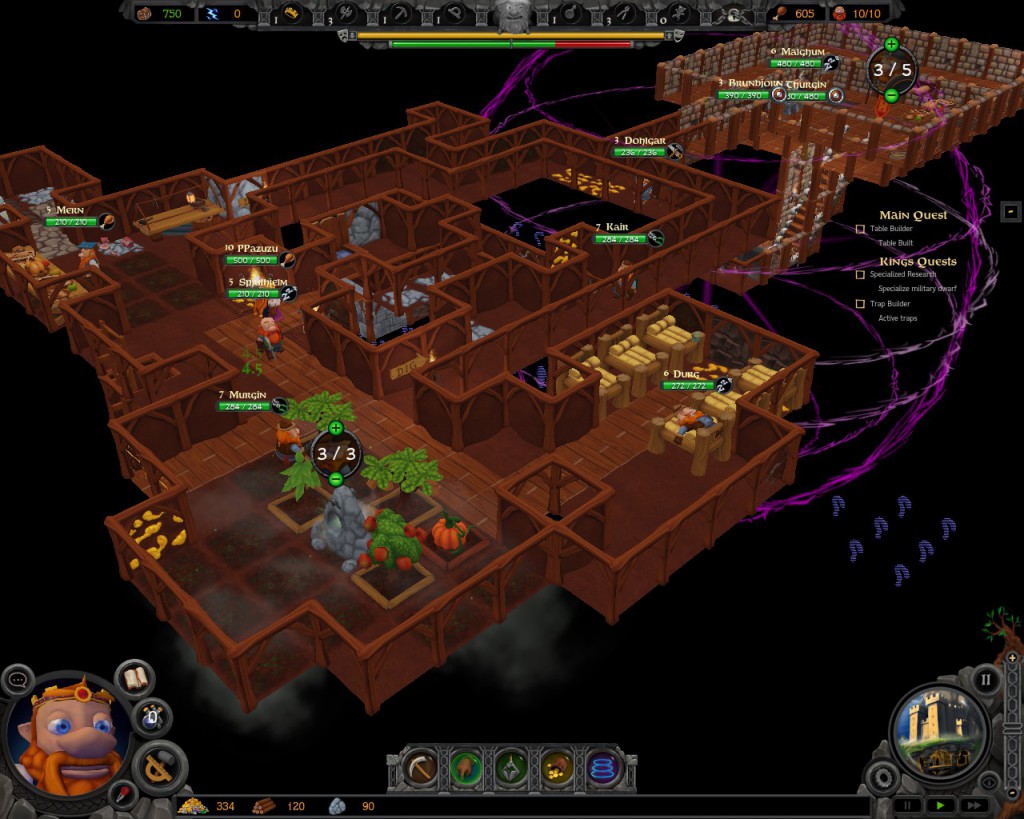 AGoD (that must be one of the better videogame acronyms) offers both a story-led series of missions and a sandbox-style ‘Custom Game’. In the latter it’s possible to turn off all enemies entirely, so if you just want to build your dream Dwarven suburbia without being interrupted by intruders, that’s something you can do.

In the campaign, you’re cast as the unmotivated son of the amusingly named King Father. He’s not too happy with your general attitude, so he does the Dwarven equivalent of kicking you out of the house and (after some tutorial tests) sends you and your clan off to reclaim the old Dwarf realms from some unpleasant mages.

Each mission begins with you and a few Dwarves in a pre-constructed space, with instructions to solve whatever problem is at hand (so far, the objectives I’ve encountered have tended to be “dig quite far down and find a thing”). This is where AGoD diverges from the Dungeon Keeper comparisons. It’s very much a game of vertical mining and construction. 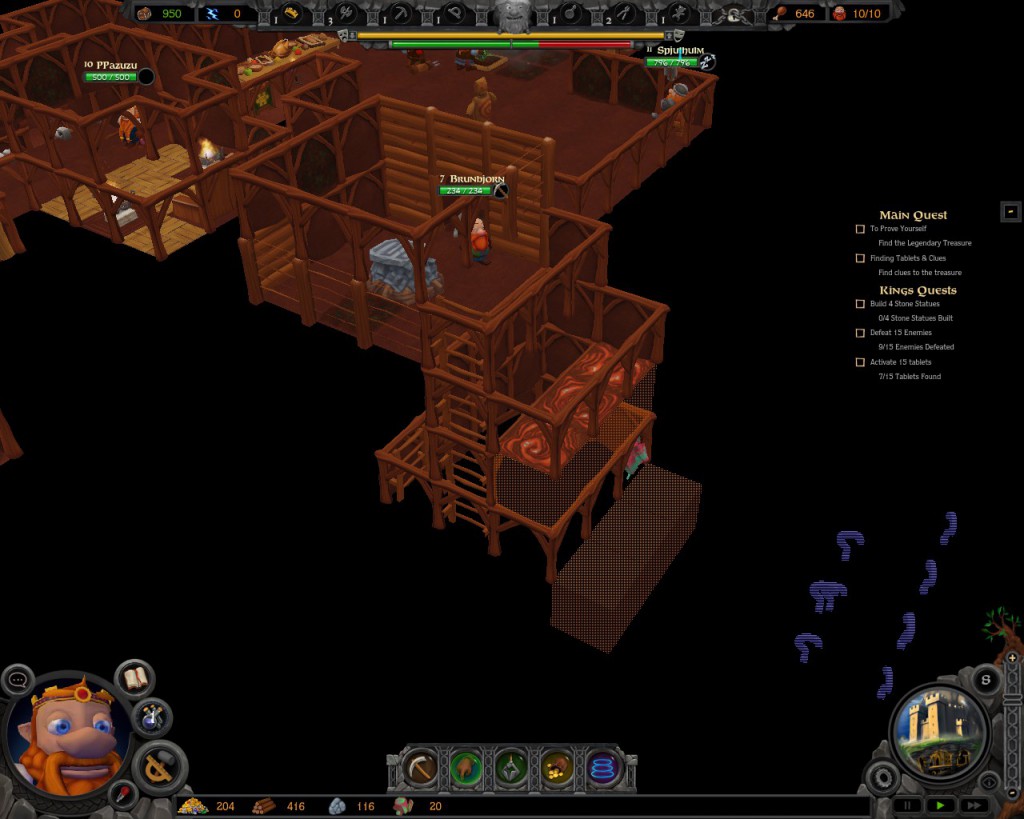 Instead of sprawling across an underground cavern, you’ll find yourself constructing ‘floors’ for sets of Dwarves to live on. Every Dwarf needs a place to rest, food to fill his belly and enough interior design to keep his spirits up. As you dig deeper, it becomes sensible to set up beds and food tables on lower floors to prevent Dwarves having to walk too far back towards the surface.

As is often the case with these games, the basic ‘Dwarfling’ model (summoned through a portal from Dwarf HQ) can subsequently be converted into one of five different professions: Digger, Worker, Craftsman, Scholar or Soldier. That should be fairly self-explanatory, with only the ‘Worker’ being a bit obtuse (these guys tend to the food and resource growing plants that you can grow in certain underground areas).

Adopting a balance between the number of Dwarves in each profession seems to be key, as upgrading your population cap much beyond 17 is rather costly. So far I’ve found that a slight tendency towards plenty of soldiers is a wise move, as the chambers and caverns you uncover beneath your starting position can be inhabited by some fairly tough foes. Sure, having more Diggers or Craftsmen gets earth mined and beds built with more haste, but not having enough troops to fend off the Orcs you uncover can be a disaster. 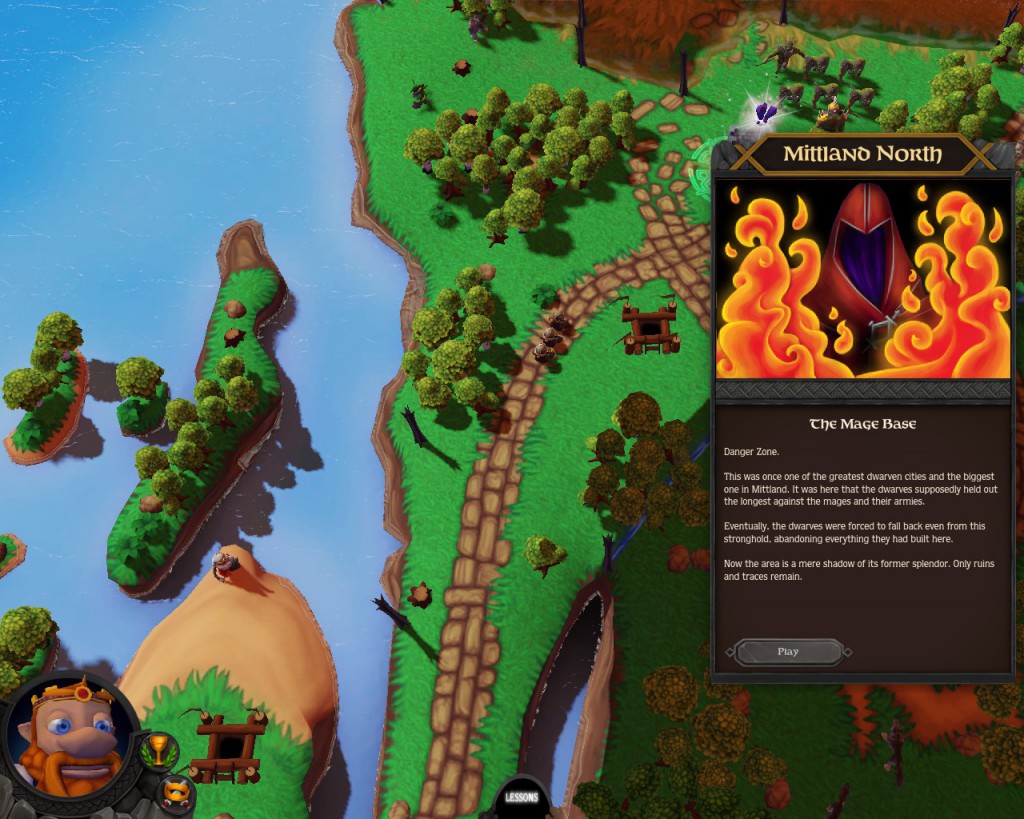 That’s in-keeping with the relatively sedate pace that the game encourages you towards. Nothing that I’ve found beneath the soil thus far has been too much of a threat; provided that my Dwarf soldiers have been of sufficiently high level. Given that (again, so far), any dangers have sprung from my own exploration, the time invested in creating enough training dummies (another nod to Dungeon Keeper) to keep my soldiers levelled up always seems worthwhile. AGoD seems to reward cautious play and punish rapid expansion.

Later missions, of course, may mix things up and put the player under greater time pressures.

Having time to build is actually quite necessary, because carving out prospective new floors in a fully 3D space is rather tricky. Everything outside of your tunnels is just a dark void (have a look at some of the screenshots to see what I mean) and depth perception kind of goes to hell in these black spaces. If you’re trying to plot out an expansion some distance away from your current living spaces, it can be hard to properly align the blocks you wish to remove.

I’m not too sure how this problem could be alleviated, other than by implementing some sort of 3D grid that can be toggled on and off. Even that may not help. 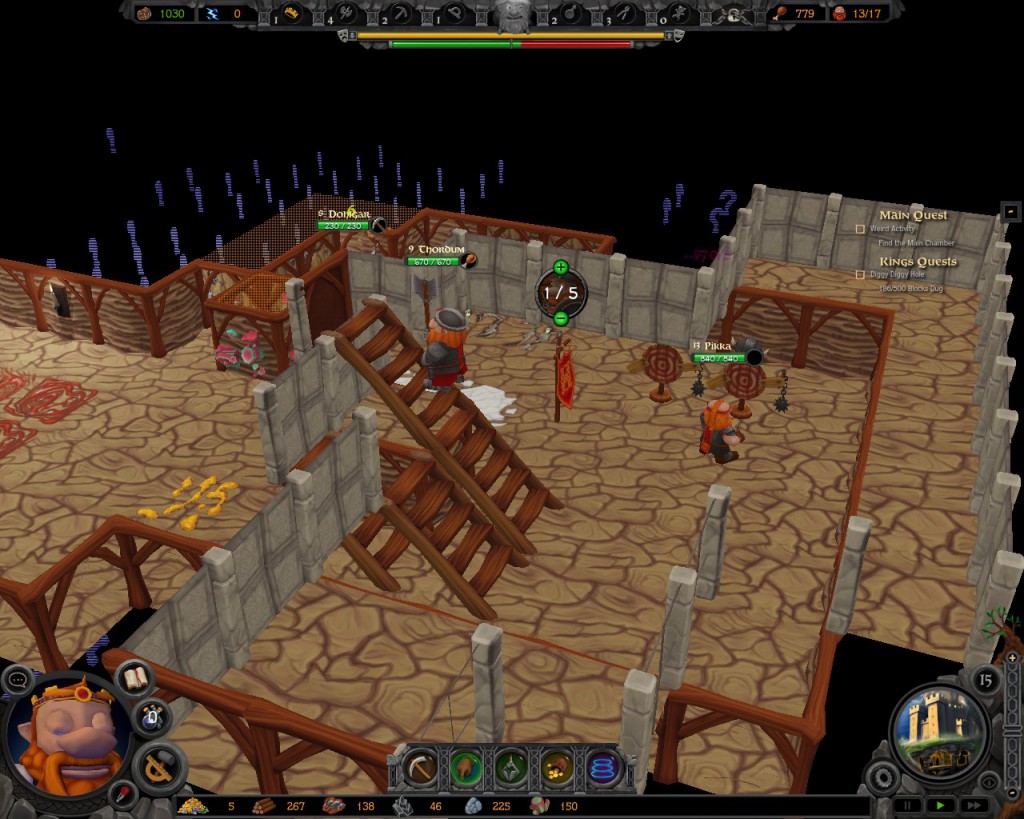 AGoD feels as if it will fall somewhere between casual town builder A Kingdom for Keflings and the more frenetic Dungeon Keeper-esque titles of the past. From my time spent with this preview code, I’ve got a definite sense that the intent is for the player to take just as many hours over picking out wall tapestries and staircase types as they do over pursuing the mission objective. It’ll probably hold more appeal with those who actively want to design a well-planned settlement, rather than just slap down a bunch of floor tiles to keep the ‘happiness’ stat boosted (which works just as well, but isn’t nearly as stylish).

Aside from Elixir’s Evil Genius (which was released about eight years ago), I’m struggling to think of many titles of the last decade that even fall within this genre. In that respect, AGoD certainly looks like it’ll fill a somewhat neglected niche. If you spent just as much time playing around in ‘My Pet Dungeon’ mode as you did following Dungeon Keeper 2‘s main campaign, this is a game to keep an eye on.