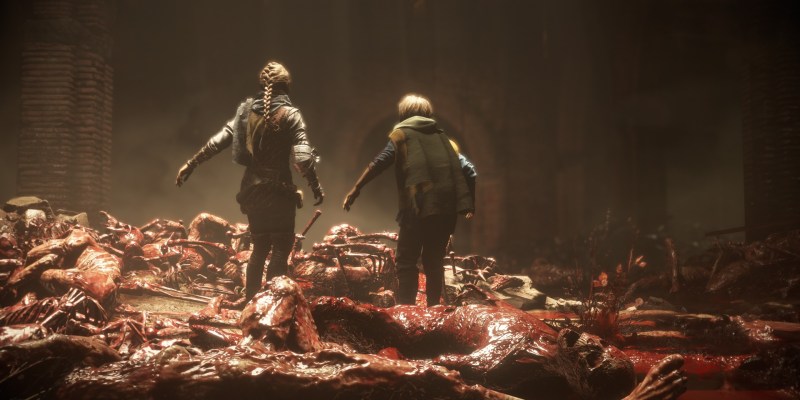 After a harrowing journey through the countryside, Amicia, Hugo, Lucas, and Beatrice finally arrive in a town. There might still be hope for Hugo, as a magistrate knows of a cure for the Macula. Here’s our A Plague Tale: Requiem Chapter 2 – Newcomers walkthrough guide to help you with the main objectives in this location, as well as finding Magister Vaudin.

At the start of Chapter 2 – Newcomers in A Plague Tale: Requiem, you can explore the town at your leisure. See the sights, marvel at the festivities, and talk to the flower vendor. As you reach the end of the main road, you’ll see the Order’s building, which is where the family will have some much needed rest.

Beatrice says that Magister Vaudin of the Order might know of a way to help Hugo. She tasks Lucas to fetch him, but, naturally, Amicia goes with him as she’s the player’s character.

Go back to the flower vendor, then talk to her husband, a fella who’s cleaning the leaves off to the side of the market stalls. Follow the alleyway until you reach the arena, then go right to find enter via the pigsty.

The next part is a stealth section, so use the obstacles to avoid getting spotted by soldiers.

If you see hostiles here, check side passages so they don’t see you.

Eventually, you’ll reach the outer yard of the arena. Several knights will appear, including an archer. The goal is to advance forward while the archer’s back is turned, then make your way left under the scaffolding.

The exit is all the way at the back. To open it, try to sneak past the archer and the remaining guard. Even if you get detected (i.e., orange icon), the animation to open the door will still trigger. You’ll only be prevented from doing that if they’re totally aggroed (i.e., red icon).

Note: Around this time, a notification will also tell you about Amicia’s skills/perks. These are automatically unlocked depending on the actions you take while playing. You can learn more in our skills/perks guide.

Upon exiting back to the open area, Amicia and Lucas will see the vast shantytown. Then, the platform collapses, sending them both to the sewers. What follows is a hectic chase sequence where Amicia has to run away from thousands of rats.

Moreover, this is when you’ll learn about the usage of fire (i.e., torches, sticks, braziers, and lamps) to fend off the vermin. And, after Lucas falls down, light the brazier and the one at the opposite end. Throw an unlit stick to Lucas as well so he can make it across.

Note: You can learn more in our rat swarm survival and horde control guide.

In the next section, Amicia and Lucas have to rotate the wheel to get the elevator to come down. Here are the other tasks:

This is also when you’ll learn how to craft Ignifer, a means of creating fiery throwable items and projectiles. Throw this at the large brazier in the center to light it, causing the rodents to scurry away.

In the bottom area chambers, look for more braziers, lamps, and carcasses that can scare rats or act as distractions. Likewise, you may need to use the Ignifer combined with a pot to create a flame AoE on the ground.

Hold the interact button as Lucas does the same to bring the elevator down. Then, ride it all the way to the top. Silently make your way across the field by using the tall grass.

Soon, more rats will emerge from deep underground. The soldiers will be distracted, but try to avoid them nonetheless to make exploration easier. Your goal is to use the passages and buildings to the side until you reach the tower with the large doors.

In this last section, there’s a fairly straightforward puzzle. Basically, you just need to hit each plaque to make it rotate. Lucas will tell you the correct symbols, and Amicia will remark as well.

Once that’s done, enter the room to meet Magister Vaudin. After a cutscene, you’ll end up back home. This concludes Chapter 2 – Newcomers in A Plague Tale: Requiem. Next, you’ll need to find nightshade in a chapter called A Burden of Blood.

A Plague Tale: Requiem — Chapter 3 – A Burden of Blood guide

By Chirag Pattni13 hours ago
Guides