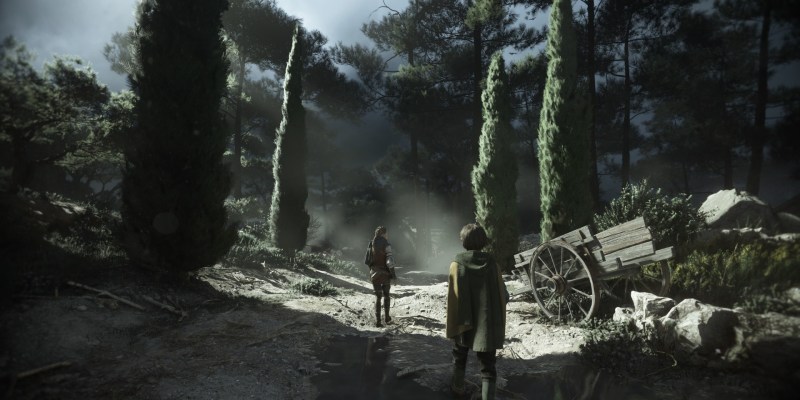 Hugo’s condition is worsening, and Amicia has to do something. Magister Vaudin tasks you with getting nightshade, but it’s all the way at the outskirts of town. Here’s our A Plague Tale: Requiem Chapter 3 – A Burden of Blood walkthrough guide to help you with the main objectives, as well as getting the nightshade from the herbalist.

As usual, go follow Lucas to reach the dingy butcher’s area of the city. He’ll reveal a passageway that takes you to a small alley, which also happens to have all of the refuse and icky stuff in this part of town.

Naturally, the rats will come scampering about. Apart from using torches and Ignifer to make fires, you’ll learn about Extinguis. The main ingredient, saltpeter, is used to put out fires.

In some cases, this will make the rats move to a particular spot since there are no flames to scare them away.

Alternatively, Extinguis can be thrown at soldiers with torches. With no protection, the rats will gobble them up, causing a distraction that lets you get past them. Moreover, when combined as ammo for a pot, this creates a wider AoE in case some hostiles are close to each other.

Once you’re done with these, you should find the controls to the drawbridge. Interact with it, then make a mad dash to exit the city gates.

Outside the town (as seen in the featured image), you’ll see a hut with a workbench and a corpse. Past that is a yard with thousands of rats and a few patrolling soldiers. You’ll also notice the church in the distance.

Your goal here is to use Ignifer to create flame patches on the ground, as well as to light lamps, until you’re at the cow’s carcass (it acts as a checkpoint). While there are a couple of paths that you can take, I simply suggest going to the right and tossing Extinguis at the guard in the center. Since the other two guards are walking away, you should be able to enter the church’s basement. 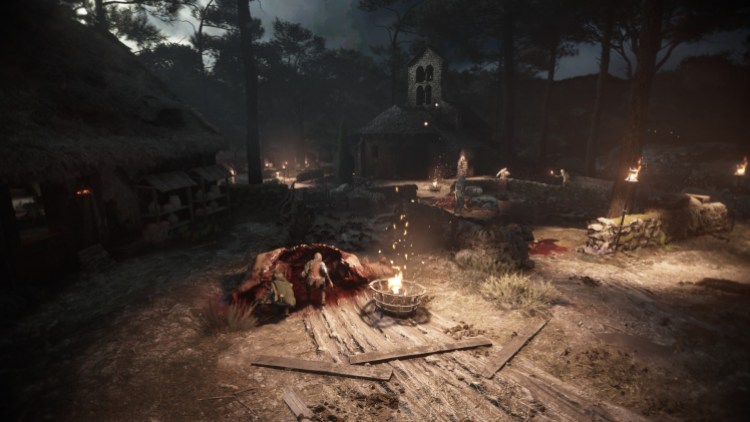 Can you save the herbalist?

Exit the church and you’ll find more soldiers, so feel free to distract, kill, or ignore them. But, as you approach the sloping path, two guards will appear, along with the herbalist. There is a way to save the herbalist in A Plague Tale: Requiem, though it’s not required at all. In fact, nothing new would occur, and you won’t even get an achievement for it.

Basically, one guard will walk away. You can get the rats to kill him by putting out his torch. That will cause the second guard to move to that location with the herbalist in tow. Again, Extinguis will help here since the guard will get eaten by the vermin, while leaving the herbalist unharmed.

Again, though, since it’s not a requirement, you can just kill both guards, as well as the herbalist. That’s totally fine. In any case, approach the edges of the road and look at the side of the canal for an entrance. 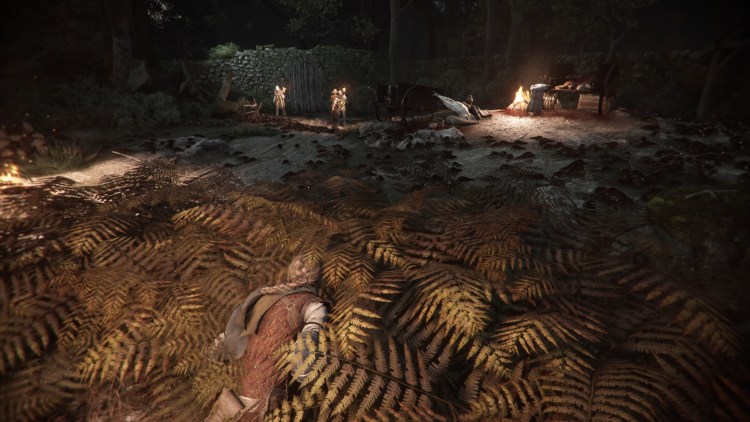 At the herbalist’s home, check the yard for different flowers. You need to interact with all of these first before Lucas can remark that you have to enter the house.

Don’t forget to check the large tree for ornaments. Use your slingshot to bring these down since one of them has a flower collectible.

Inside the house, Lucas will say that he’ll look for the nightshade, but you’ll soon hear him screaming for help. Make your way to the shed, using the tall grass and large leaves to stay hidden.

You’ll have to fight multiple guards here. Those that aren’t wearing helmets will get instantly killed with a well-placed hit with your slingshot. However, the shielded ones require you to hit the saltpeter sacks first. The dust will distract them, allowing you to pelt their heads with ease.

Unfortunately, a large armored knight known as The Beast will corner Amicia. She and Lucas get thrown in the dungeon.

After the cutscene, use the companion action so Lucas can distract the guards with his bombs. Then, climb outside the tower and gingerly get across using the beam.

Stay hidden in the next areas, using Lucas’ flashbang only when prompted.

Eventually, you’ll find yourself in the storage room. Check every nook and cranny here, but don’t interact with the door just yet. At the back where the ballista is, you’ll find Amicia’s tools and a knife.

The knife can unlock the workbench here. Your slingshot, meanwhile, can be used to hit the elevated ledge at the top. This lets you grab the Map of Guyenne souvenir.

When you’re ready, interact with the door. Then, check the crates in the center, prompting Lucas to say that he’s found something. Push the crate so you can reach the ballista’s controls. Have Lucas rotate the lever, and hit the winch with your slingshot to bring the ballista down.

Push the siege weapon toward the door, then interact with it to fire a projectile. Combine with Lucas’ concoction, the remaining hostiles will get stunned. This concludes Chapter 3 – A Burden of Blood in A Plague Tale: Requiem. Next, you’ll need to head to the harbor to find someone who can take you out of the city in a chapter called Protector’s Duty.