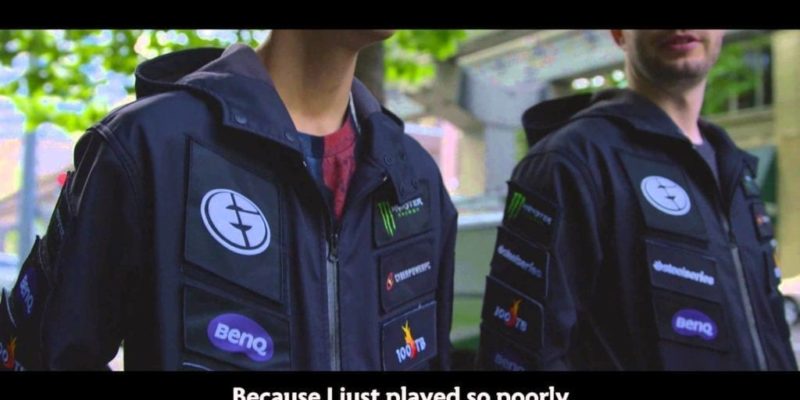 Key Arena, Seattle – Evil Geniuses, the American favorites, are playing CDEC, the Chinese newcomers, in the Grand Finals of The International Dota 2 Championships. Evil Geniuses are up two games to one in the best of five series and are leading Game Four by a staggering amount of experience and gold. Evil Geniuses dominates the final team fight and the Chinese team types “GG.” The crowd erupts. Fireworks explode. $18 million in prize money is awarded. Somewhere someone shouts, “This is e-sports!”

Are eSports really all that different from traditional sports?  From a viewer’s perspective it’s becoming harder and harder to spot the differences. Football, baseball, basketball, soccer, and hockey are all games played on arbitrary fields following arbitrary rules by professional athletes who’ve devoted their lives to playing games. And, for the most part, eSports are extremely similar.

The field just happens to be digital. And, as time passes, that will matter less and less to more and more people. In the very near future, eSports will be mainstream globally, an alternative outlet for viewers’ desires for competition, in games that are easier to play with professional players that are easier to watch and scenes that are easier to engage with meaningfully. In fact, I’d argue that eSports have already reached the big time.

In October 2014 the “League of Legends World Championship” sold out the 40,000-seat Sangam World Cup Stadium in Seoul, South Korea. Twenty-seven million people watched those finals online. As of 2014, Twitch, a platform dedicated to online game streaming, boasted more than 55-million users and nearly a trillion pageviews a month. Currently more than $150-million in eSports prize money has been awarded across nearly 12,000 tournaments.

With that being the case, however, eSports remains on the cusp of public consciousness in much of the world. Here in my home of Canada, Marcus “DJ Wheat” Graham, Community Director at Twitch, still needed to appear on sports talk show Tim and Sid to explain what eSports are. Don’t believe me? Watch the painful video here.

You know what I’m talkin’ about?

While eSports are very popular they are not quite mainstream globally. Mainstream implies a common level of knowledge and acceptance held by the general populace. Average people need to know what eSports are and accept them as a valid form of entertainment and employment. In this sense, eSports are already mainstream in places like Korea and Sweden. The key goal for organizers and evangelist fans is for eSports to obtain mainstream status here in North America. With awareness being generated from above through big money tournaments, and from below, with the aging of increasingly tech savvy generations, this is bound to happen in the very near future.

One thing that eSports does is remove the physical barrier of entry for players. Games like Dota 2 don’t require any level of physical fitness. Playing a video game doesn’t require leaving the house. Players need only log on to Steam to organize a game with friends. Millions of potential opponents and teammates wait to play online at any hour of the day.

Bring down that wall!

One thing important about eSports is the ability to easily play. This ease of play provides eSports with a distinct advantage over traditional sports. As potential players age, and their lives become more busy, the accessibility of e-sports becomes more and more appealing. People that have grown up with video games increasingly use e-sports to keep in touch and hang out. A virtual night out with friends is already not uncommon.

Younger gamers currently growing up with Minecraft will play future games on future platforms in increasingly socially integrated ways. As the Minecraft generation ages, the games they play casually will be played professionally, and eSports will be as compelling and natural to them as Major League Baseball is to those of us who grew up playing tee-ball.

eSports, it’s in the game.

The arena of eSports is already compelling. For players who turn into viewers and viewers who don’t play, e-sports provide the same excitement as traditional sports. Sports are the original reality TV. Long before television, sports were the first product to package unpredictable human drama for consumption by fans in person then via radio. In many ways, internet streaming is just the next medium in the delivery of competition to viewers. And e-sports provide new unique content for internet streaming to deliver.

The money, the celebrities, the moment-to-moment tension in every game – eSports has all the ingredients necessary to turn first-time viewers into devoted fans.

Take Evil Geniuses’s SumaiL for example. A poor kid from Pakistan who once sold his bike for more playing time becomes a millionaire by winning the International at the age of 16.

Combine that with a scene that offers captivating news such as when Evil Geniuses’s Aui 2000 was immediately kicked after winning The International and becoming a millionaire in favor of Dota 2’s prodigal son, Arteezy. However, emotions are easily swayed as other news comes about. When all is lost, the A-God makes a return.

Do you even hype, bro?

Beyond the personal interest stories and day-to-day drama, eSports also offer the necessary potential for transcendent plays at any moment. As with traditional sports, much of the value comes from the opportunity to watch the world’s best perform at a world-beating level. Players like FY provide highlight reel moments that blow the minds of viewers and provide unique highs that can’t be obtained anywhere outside of sports.

There are different things that eSports can also provide community scenes that fans can engage with in unique ways. Competitive video games digitize merchandise. Rather than buy a physical jersey from a favorite team that will be worn twice a year, players can buy cosmetics for their in-game avatars.

Is it the shoes?

Valve, creator of Dota 2, took this concept of purchasing in-game “hats” to the next level with the introduction of Dota 2’s compendiums. Compendiums are effectively interactive digital programs for The International and other tournaments. In addition to detailing lineups and allowing players to bet on tournament outcomes, players are given the option to level up their compendiums through micro-transactions. Leveling up compendiums provides players with blind boxes that yield random exclusive in-game cosmetic items when opened.

This scheme allows players to meaningfully interact with tournaments like The International by offering rewards and betting opportunities to players who spectate professional matches while enhancing players’ experiences in their own casual games. And a quarter of the proceeds from the sale of compendium related items contributed over $16-million to The International prize pool. This interactive crowdfunding scheme is unique to eSports and is perhaps the first of many ways organizers can exploit the inherent ease of connectivity between players’ gaming and viewing experiences to provide enhanced value and generate revenue.

Viewers have the unique opportunity to watch their favorite eSports personalities stream individually. It would be hard to find a way to watch Tom Brady play catch with Aaron Rodgers on a regular basis but at any given time famous eSports players and casters stream their own casual games. Viewers can tune in and directly interact with streamers and other viewers through Twitch chat. This level of always-on personal connectivity presents unique value for eSports viewers in a world where fans’ desires for interaction with their favorite celebrities is increasing.

Ease of play, ease of interaction, and unique forms of engagement have made eSports too compelling to fail. They are not a fad, and are instead, the next big sports in a future sports landscape where they co-exist with traditional sports.

In the next ten years, North American mothers will embrace their children’s dreams of becoming professional gamers. This will happen because eSports will be mainstream. The average North American will know what eSports are and accept them as entertainment that people can play professionally. Sport personalities like Arteezy will someday be as well known as your Alex Rodriguezes’ or your Tom Brady’s.

Budweiser will sponsor The International. Twitch and YouTube Gaming will engage in bidding wars for exclusive content. And the ultimate evolution will come when the idea that athletes make millions of dollars playing video games isn’t noteworthy at all.