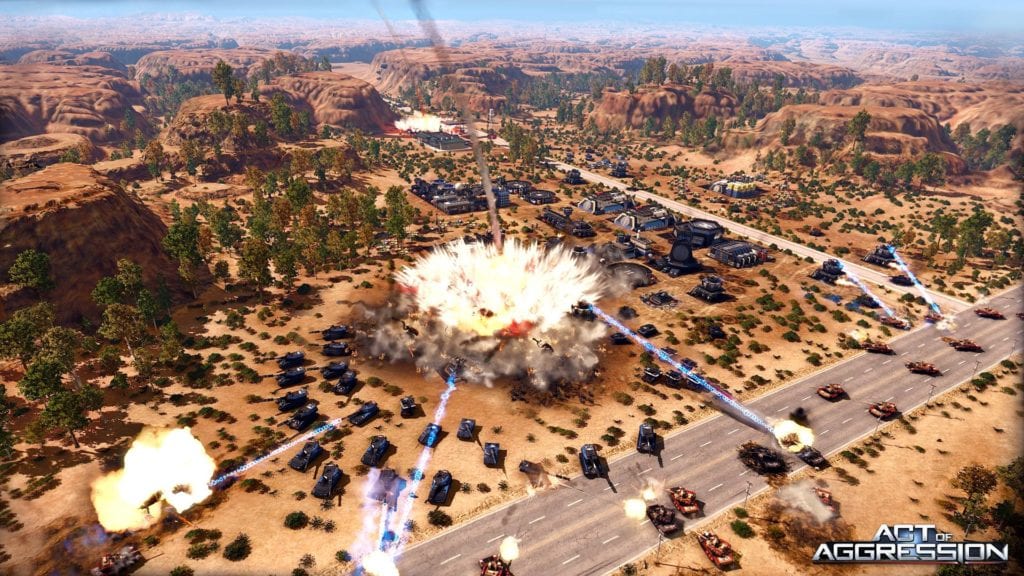 Eugen’s Act of Aggression can be a complex beast with its different tiers, factions, units and resources. We’ve seen lots of questions from players during the Early Access testing for the multiplayer, so here are a few tips and tricks that may help in both the solo campaigns and multiplayer. Some of these may sound obvious, but you’d be amazed by how many people are having issues with some of the features.

Resources can only be revealed with a Recon Team; a regular vehicle will reveal the map, but not the resource nodes. This applies to all factions.

Select your scout (Recon) vehicle, hold SHIFT down, and then right click on the map, minimap or satellite view to order the vehicle to visit all those locations in order. Set up some waypoints like this and you can focus your attention on more important matters.

Resources come in three flavours in Act of Aggression: Rare, Oil and Aluminium. These resources do not replenish on the battlefield. Once you’ve harvested them, that’s it – but there are ways to gain more resources via POWs, prisons, etc. Use these options!

To increase resource flow, always make sure you have a drop-off point close by, such as a LEM (US), Outpost (Chimera), or Extension Module (Cartel). This also saves money on purchasing extra delivery vehicles, and speeds up cashflow.

Placing buildings correctly is important. Remember that you can rotate the buildings before placing them using the TAB key.

Double-clicking on a unit will select all units of the same type, regardless if they are already in a group – but only types with same upgrade.

When loading a vehicle with a selected group of troops, it will only move the number of men than can fit in the vehicle.

Do not underestimate the power of men in buildings. Well-positioned troops in strategically located buildings can decimate enemy ground armour and choppers. Keep this in mind during the solo campaign.

Use the terrain to your advantage. The higher your vehicles/troops are, the better their vision and line of sight. Take the high ground!

Applying a permanent upgrade to a building’s output will apply it to any units already built. For example: all existing Marines will get the SAW when you upgrade the Barracks with it.

If you order a structure to be built and the construction vehicle is destroyed en route, the structure will not be built, and you will lose the resources it cost to build.

(US) Field Hospitals can only be built within the Barracks’ build radius.

(Chimera) Prisons can only be built within the Barracks’ tiny build radius.

When capturing prisoners, use the SHIFT key to waypoint each prisoner in turn. This means you can set your capturing unit on its way and forget about him. You can also SHIFT-click to set up a waypoint in a safe place when he’s finished – assuming he doesn’t get killed.

If you have an injured infantry unit with a white star above its head, it can be ordered back to base. Select the unit, and if it makes it home, you will be rewarded with 200g.

In Act of Aggression, the trading of prisoners for resources can make or break your game. Always capture prisoners when you can in order to augement your income, especially when resources start to run low. Note that you must have the following, otherwise the prisoner will be exchanged for no reward:

A good way to inflict some real damage on a Cartel base is to attack their power stations. When these explode, the blast radius is huge, and the blast can cause a decent amount of AOE damage.

During the solo campaign, don’t always attack an enemy head on. Look for weaknesses in their base defenses. Sometimes sneaking around the back and taking their HQ can complete a mission quicker.

There are a number of structures, upgrades and strategies that allow you to build away and out of your original base, establishing bases to support team mates or satellite bases to control resource rich areas.

If you are trying to establish a second base, especially sneakily, then you should learn the ‘Grizzly Project‘ via the Field HQ which doubles the speed of your Shredders (build vehicle). You can’t control the Shredder to sneak it round the edges of the map so it will always go via the roads, so the faster the better.

All the following structures can have a protective wall built round them with ‘Green Zone‘ available from the Logistical Center after learning Defcon 1. You only need to learn it once for 2000 alluminium,and 500 rare earth and all buildings you have that can get the wall will get it.

Defense Projection – Bought at the Field HQ. Only allows the MG nests (turrets) to be built anywhere on the map.  They have no build radius.

FOB – Can be built anywhere on the map via the Defcon 2 tab.  You can then build any structure within its medium build radius via ‘Base Quick Selection’ menu.

LEMs (both types) – Can not be built anywhere on the map but you can build them out from your base. They have a small build radius that you can place any other structure next to via the ‘Base Quick Selection’ menu.

Outpost – This building makes it very easy to establish another base as it can be placed anywhere on the map and has a decent build radius to place other buildings such as turrets and vehicle bays.

Rare Earth Outpost –  As with the LEMs in the US faction they can not be built anywhere on the map but you can build them out from your base. They have a small build radius that you can place any other structure next to via the ‘Base Quick Selection’ menu.

Barracks – Barracks can be built anywhere on the map once the ‘Force Projection‘ upgrade has been learnt via the Head Quarters building. It has a small build radius that Artillery Turrets can be built on, nothing else.

Expansion Module & Rare Earth Extension Module – From the ‘Private Military’ and ‘Black Ops’ tab respectively this unit can not be built anywhere but it can be built out from a base and an structure can be built within its large build radius via the ‘Base Quick Selection’ menu.

Dustoff – Heals infantry. Transport helicopter built at the Field Hospital that will heal infantry within its vicinity and any that it is carrying. Will heal infantry inside a building such as the Bank.

Field Hospital – Heals infantry within its vicinity.  Will repair them all at the same time. Must be build near the Barracks.

Logistical Center – Repairs structures within an area directly around it. It automatically repairs all buildings at the same time for free.  It does not repair itself.

Hercules – Repairs vehicles and aircraft.  Built via the Logistical Center the Hercules is a mobile repair unit which can repair one vehicle at a time.  Multiple Hercules’ healing effects will stack and heal a single vehicle faster.

Move a group of vehicles within its repair circle and it will work it’s way through all those that need repairing.

Namer – Heals infantry. Transport vehicle built at the Repair Center that can be upgraded with ‘Medical Namer’ via the Repair Center. The Namer will heal any infantry it is carrying and those within its vacinity at the same time.

Prison – Heals and revives infantry. Grants access to ‘Nanohealing’ and ‘Nano recovery’ allowing you to remotely heal and revive infantry who are out in the field.  It costs for each infantry unit you repair or revive however. Must be build near the Barracks.

Repair Outpost – Repairs structures and vehicles within its vicinity.  This is a modification to the regular Outpost that is accessible after learning ‘Shield Protocol’.  The radius of the repair zone and repair speed can be extended by learning ‘Advanced Repair System’ via the Outpost itself.

Brem-80U – Repairs vehicles and aircraft. A mobile repair vehicle built at the Repair Center which can repair one vehicle at a time.  Multiple Brems healing effects will stack and heal a single vehicle faster.

Medical Subcontractors – Heals infantry. Upgrade available via the Field HQ that enables the Barracks to heal nearby infantry.

Repair Drones – Repairs structures. An upgrade via the HQ once Black Ops has been learnt. All buildings will heal over time.

Add your own: If you have a tip or a useful strategy please leave it in the comments.

Act of Aggression US Unit and Structure Guide