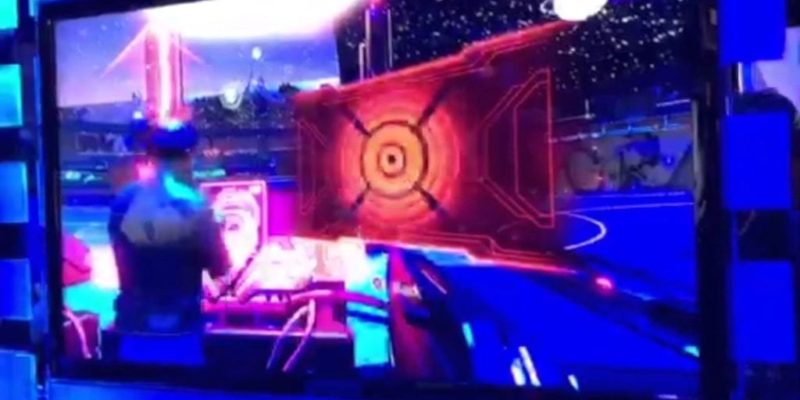 It was interesting to see where developer Volition (Saints Row) would end up when THQ started liquidating its game IP’s. This was interesting as the Saint’s Row franchise was generally well-received, becoming a staple to the open-world community of games. Since the split from THQ, Volition went on to find a new home under the parent company, Deep Silver.

During E3 this week, Agents of Mayhem was available on the show floor to play. The game takes place in an alternate reality within the Saints Row universe following the events of Gat out of Hell. The short 20-minute demo shed some light not only on who these agents were but also the mechanics that would be at their disposal.

The opening of the demo allows you to select three agents you will be taking on the mission. The main character in the trio was the Mayhem Kingpin. His primary weapon was an armor piercing pistol. One of his specials could be launched, emitting a plasma-like grenade explosion. Others that I selected were Daisy, a mini-gun wielding, roller-derby skater. She was the tank of the crew with the blazing firepower that she emitted. Lastly, I chose Rama, a bow-and-arrow wielding distance character. Each character was able to not only double jump but triple vault platforms. This was yet another way in which the quirkiness of Saints Row seemed to be influencing Agents of Mayhem.

At the time of the demo, we were able to select a few different agents as a squad. There are three total character slots to fill before deploying on a mission.

Each of the agents had their “mayhem” ability that could be enacted. I had first selected Red Card, but then noticed Daisy’s character and she looked like a blast to play.

Your Mayhem ability is replenished over time and lasts for a decent period of time. For example, the Mayhem Kingpin could throw down a boombox that would make every enemy in the room dance, entranced in the beats he’s laying down. You can then start picking them apart and firing on them. This was actually pretty funny to see, just being that the game blends a nice mix of action, humor, and some damn impressive visuals.

Daisy gets some hellaciously charged firepower. Her only other ability is to recharge her mini-gun, which makes her invincible during this time. It also kills enemies if they come into contact with you while this is enabled.

There’s no doubt that Agents of Mayhem left an impression on me based on visuals alone. The best I could describe it would be a cross between Borderlands’ cel-shading and of course, Saints Row. At the point in the demo where we got to face a mini-boss by the name of Hammersmith, the game really showcased its urge to spew colors in every which direction. There were flashy red, blue, and yellow sparks and beams illuminating the screen. The art style just seemed to fit all together, something polarizing of dark, tall city buildings and walls.

I’d have to say that the best part of the demo was something I had noticed early on. Admittedly, I haven’t been following Agents of Mayhem as closely as I should. I had read an article from Polygon stating that Agents of Mayhem could be the “…sleeper hit of 2017.” Seeing that title alone intrigued me. And, seeing the RPG elements present in the demo gave me even more to hope for.

Bosses like Hammersmith can be seen losing damage points. In some cases, only one agent may have armor piercing gunfire, yet another way in which you can swap agents, deliver damage, and have something more than your everyday, open-world action game.

I will say this about Agents of Mayhem: I’m even more convinced that this is a game for me. There are light RPG elements, action, and comedy that can be found within. And, for those looking for a visually impressive game, it stuns in the cleanly detailed assets. I’ll definitely be ready to unleash some mayhem come launch.