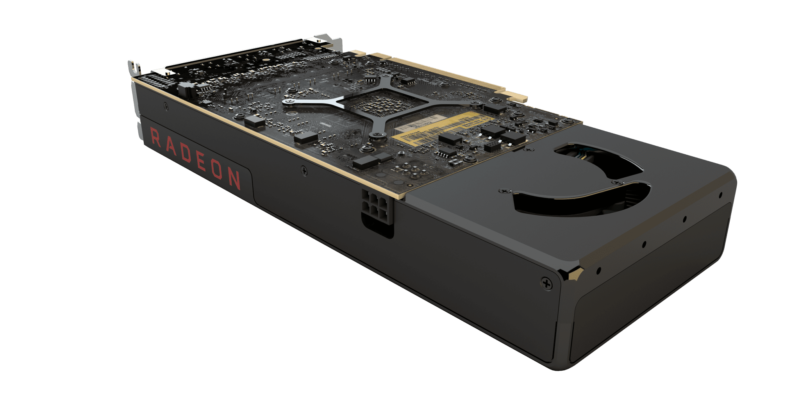 AMD has revealed a few details about the first of its ‘Polaris’ range of cards at a Computex event this evening, unveiling the RX480. Much like the 1070/1080 ‘Pascal’ cards announced by Nvidia earlier in May, Polaris will be based around smaller semiconductor technology. In AMD’s case, that’s 14nm FinFET.

The broad end result for graphics cards manufactured with 16/14nm is greater power efficiency, and significantly improved performance over the prior generation of GPUs.

As is often the case with these early reveals, specific benchmarks were a bit thin on the ground. But some of the technical specs were offered in a slide (see below), and the pricing ‘starts at’ $200 USD. The RX480 will come with either 4GB or 8GB of GDDR5 VRAM, so $200 will presumably be for the former. Expect closer to $250 for the 8GB version, I’d imagine.

Power-wise, it’ll draw around 150W and require a single six-pin connector. In terms of performance, I’ve seen comparisons all over the map and all of them should probably be taken with multiple salt grains until independent benchmarks appear. Early reports suggested AMD are putting this card up against current GPUs in the $500 range; that would mean the R9 390X, GTX 980, or maybe the air-cooled R9 Fury.

Others who’ve looked at the technical specs are being a bit more cagey and estimating equivalent performance (or a little better) than the R9 390. Even at this pessimistic end of the spectrum, though, that would be a tasty GPU for $200-250. It’s been increasingly clear over the past few weeks that AMD is aiming for the more budget gaming/mainstream with its Polaris offerings, with ‘enthusiast’ cards coming later under the Vega code-name.

As always in these situations, proper benchmarks will be required before determining where the RX480 falls on the grand GPU scale.

Overwatch cheating bans now being dished out by Blizzard