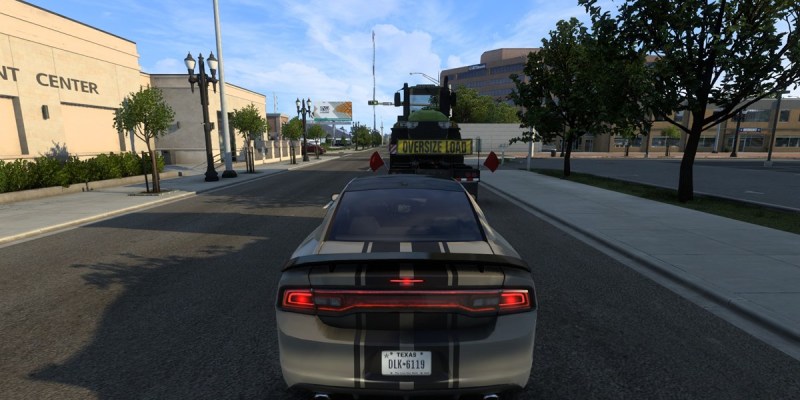 I’m now about three hours into my early impressions of the new Texas expansion for American Truck Simulator, and it’s safe to say I’m blown away by its sheer size.

Texas is the second-largest state in the contiguous US. I am what you’d call a geography snob. As such, you’d think I’d be mentally prepared for the long hauls the expansion promises. But, as I state around the in-game map of the new expansion and gawk at the miles and miles of roads, and dozens and dozens of mapped settlements, all I can think of is: “My eyes are gonna hurt when this is over.”

With past coverage of map expansions for American Truck Simulator (and Euro Truck Simulator 2), I’ve framed my pieces as essentially road trip logs. For some reason, the format just seems to fit so well with the task at hand. Even though the idea is to do the same here with Texas, I’m not quite sure how to do so, considering its monolithic scale. And that’s why I’m essentially splitting my thoughts on this grand journey into two parts. 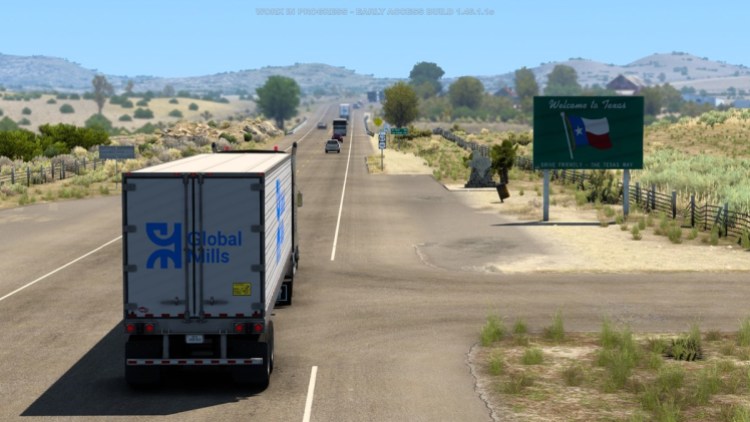 I’m not shy to admit that I have been bit by the hype bug for this expansion. Not only has the team at SCS Software has been talking about it for months on end, squeezing out details here and there, but also it’s just the achievement of the project within of itself.

This will likely be the most elaborate map expansion that American Truck Simulator is ever going to get, considering that the only larger US State is Alaska. However, the 49th state is separate from the main body of the country and is also mostly barren wilderness. Thus, the Texas expansion is the magnum opus. Every preceding map expansion will be progressively smaller and smaller, as the central and eastern states are physically just so. 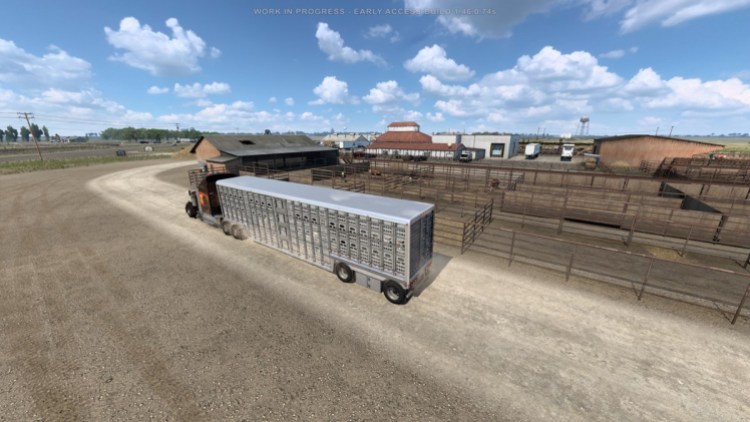 Having said that, entering the new scenery from its northwestern corner with New Mexico heading to its most northern mapped point, Dalhart, was relatively quaint. I hadn’t even noticed that I crossed into Texas until I took note of the huge swaths of beautiful farmland that straddled both sides of the lone, country road, which also happened to be where I was delivering my first haul. Quite fittingly, it was a trailer of live cattle — a Texas staple.

From here, I made my way south to Amarillo, which is where I got my first true surprise — an explorable metro area. While this virtual rendition of the city is greatly simplified, the fact that the narrow metro streets are drivable is quite interesting.

Such urban areas are typically bypassed in-game, since semis are often seen on highways and backroads (and it makes life easier for the scenery designers). Yet, not only are the cramped streets and towering buildings here, but I just so happened to be hitched to a big crawler tractor, which made maneuvering even more of an elaborate task. 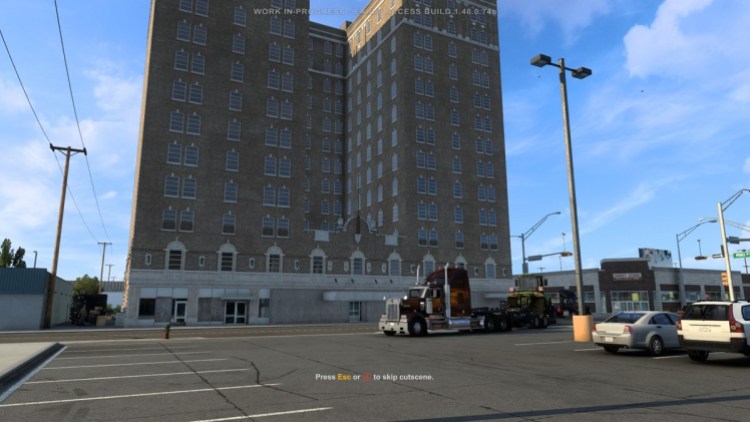 Not shy about its size

As I moved onto El Paso to deliver a much more simple trailer of nuts, it was that it was confirmed that not every piece of Texas’ urban sprawl is explorable. While many features of this large city’s skyline and infrastructure are present, you’re blocked from heading into its interior. Yet, a few miles past it lies what appears to be a new feature: a Photo Trophy. The University of Texas, another staple of El Paso, stood beautifully modeled and named. As I pointed the viewfinder at it, a neat little notification popped up to indicate to me that it was a significant feature.

I had only taken notice of this due to it being an unlabeled camera icon on the map. There are more scattered about the state, which, of course, means I have yet another task to be mindful of as I continue my journey. 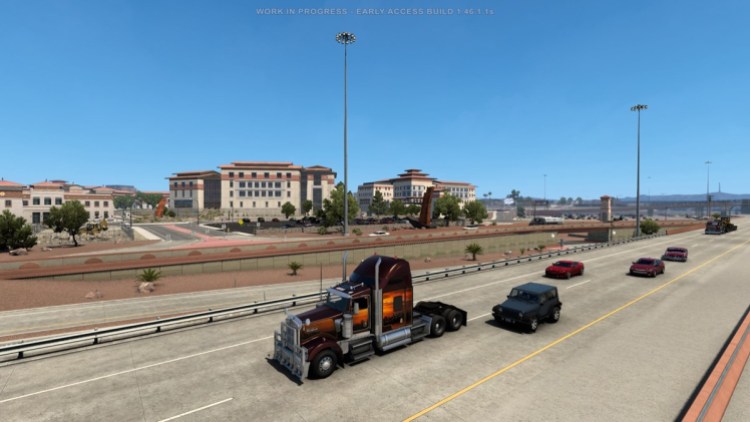 Having driven three hours and around 800 in-game miles to Texas’ most western wing, I can say that the state is looking to be quite an interesting project to tackle.

As American Truck Simulator has filled in more and more states with its eastward progression, the running theme has been that they’re huge but mostly devoid. From a natural standpoint, they’re gorgeous; huge rock formations, mountain ranges, gorgeous national parks, rivers and quaint little picturesque towns have been the name of the game. But, to an extent, as in real life, they all do look rather similar. This is yet another reason why Texas has been so anxiously awaited — it’s massive, but it has so much to scenery variation of its own to offer.

Since I’ve been mostly traversing its western perimeter, the scenery has been mostly like what’s found in New Mexico and Arizona, which is to be expected. In a way, I almost regret not immediately trying to push eastward to start seeing what’s truly “new.” Texas is so large, it goes several hundred miles more east than any of the other expansions have before, which makes sense. 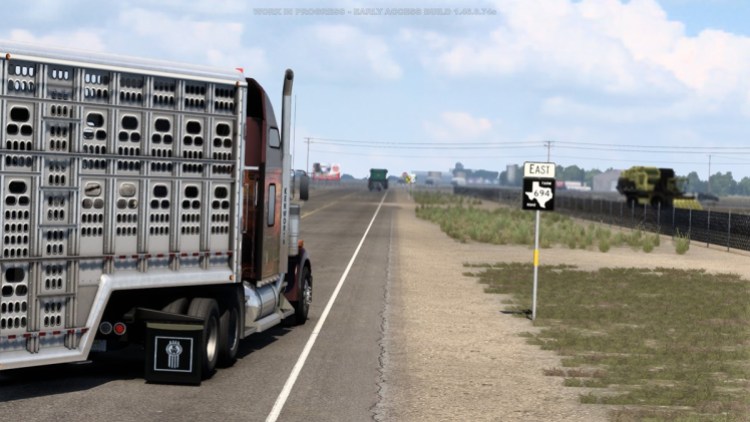 It’s almost time to roll out

Western Texas borders New Mexico, but its most eastern point stretches all the way to touch Louisiana. That’s not only an entirely different time zone, but also a different climatic region and biome. And that’s all before you go further south to the coastal cities that run along the Gulf of Mexico, which is yet another world of scenery.

Indeed, there’s a lot more for me to see. But, so far, this is certainly shaping up to be what is arguably the most integral map expansion for American Truck Simulator, at least so far.

American Truck Simulator will roll into Texas on November 15.