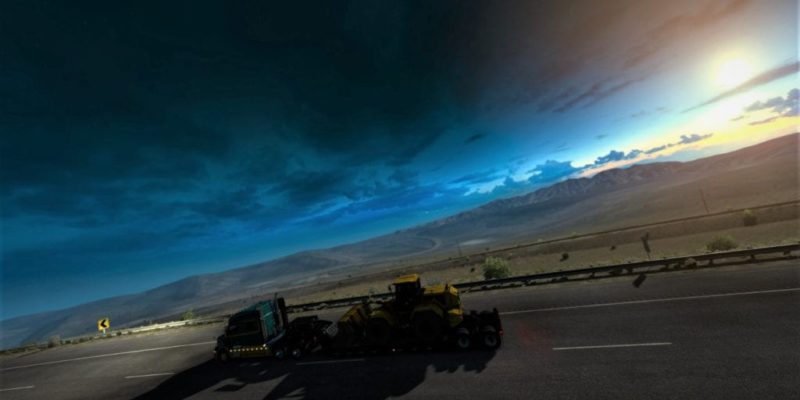 American Truck Simulator fans have gained access to some beautiful vistas throughout this year, as SCS officially expanded the map northward with the release of the Oregon and Washington DLC packs. Both of the little states proved to be just what the doctor ordered in terms of providing some more scenic variety to ATS‘ map, which still consists mostly of dry, rocky states. But, that trend didn’t continue for a third time, as the newest DLC pack takes us back into canyon country — Utah.

Utah is home to just over 3 million people and is rather sparsely populated. But while it doesn’t have much in terms of people, it makes up for it with big natural beauty. Although Utah does once again pick up the ATS trend of the aforementioned dusty states, it does hold some pretty stellar scenes that make it more than worth exploring. 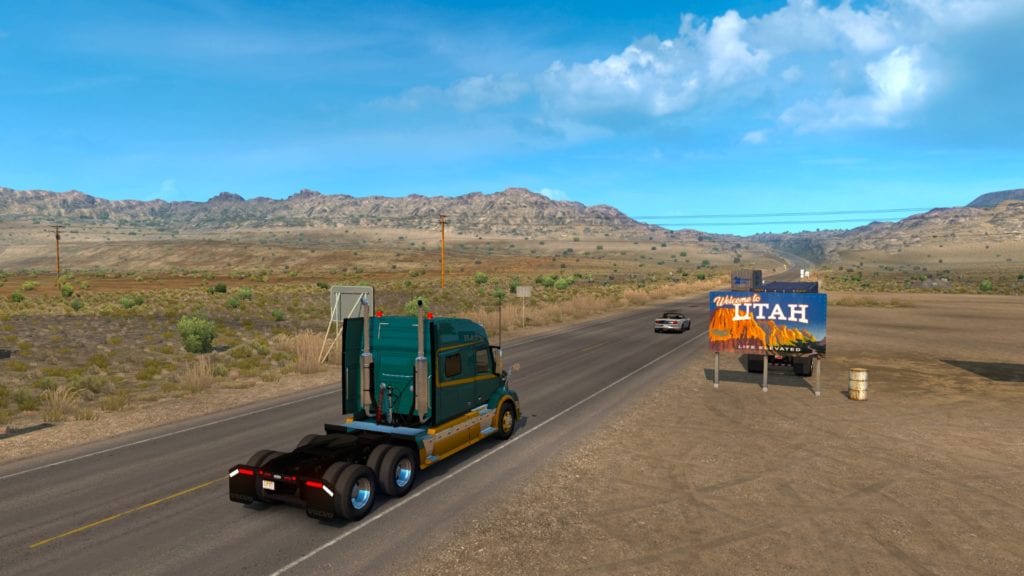 Crossing into Utah from Nevada.

To get my Utah tour on the road (literally), I picked up a haul from Las Vegas that would take me into the very first Utahan city in the southwest portion of the map, St. George. The arid scenery was pretty much the name of the game throughout the drive, though St. George did introduce me to the posh architecture that some of the more preppy areas of certain cities in Utah have. I’ll elaborate more on that later.

Rolling northwards brought me into my second stop, Cedar City. The dry, rocky scenery was still present, and I honestly felt a bit disappointed by this time. I wondered, “Wow, is this really just gonna be more of the same?” True, it’s not like American Truck Simulator can just ignore the natural geography of the Western United States. But at this point, I felt that visiting Utah was too ‘samey’ after seeing the likes of Nevada, Arizona, New Mexico, and Southern California for so long. Even so, I knew I’d have to press on anyway — and I’m glad that I did. 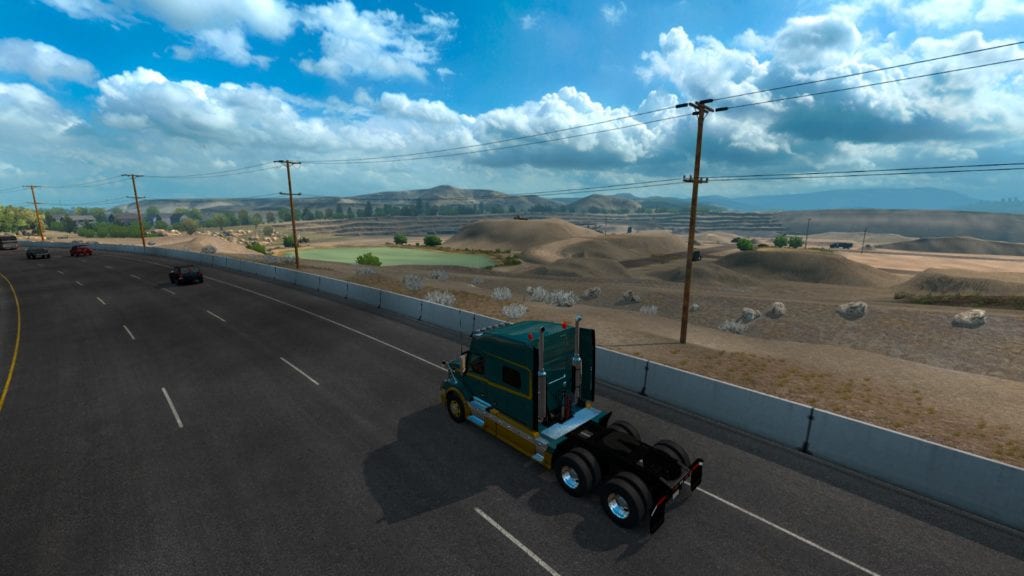 Zooming past one of Utah’s many mines.

Pressing northward, into the center of the state, brought me to the town of Salina. This is where things started to get interesting.

As I moved on past Salina even further north to the city of Provo, I began to notice the scenery finally start to change. Instead of the powdery red and orange that I’d grown accustomed to, some shades of green were starting to form outside my windows! There they were — shrubbery, trees, and bushes. While not as decked out as the forests of the twin beauties Oregon and Washington, it was refreshing to see some more diversity. This continued as I drove further north, with the grand Salt Lake City being my next stop. I was eager to see what SCS would do with this, considering it’s Utah’s capital and largest city. The result is… interesting?

A salty (small) star of the show 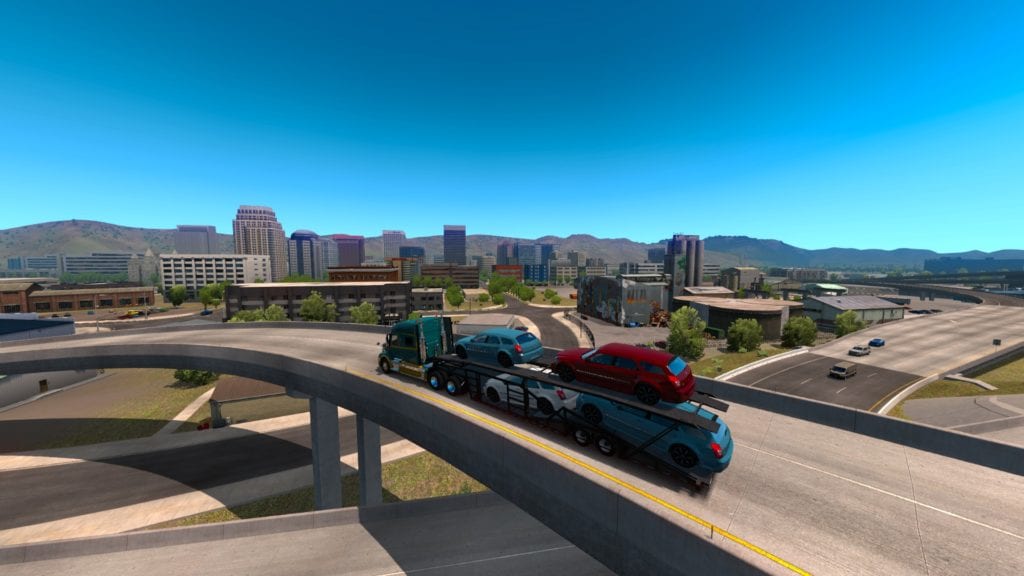 While Salt Lake City is Utah’s largest city, American Truck Simulator doesn’t do a whole lot with it. Its skyline is clearly rendered and decently detailed (especially when viewed from one of the overpasses outside of the city), but you can’t really venture into the heart of the major metro hub. Instead, the road networks focus on carrying you around the outskirts of the city. This is where Utah’s main feature really started to stand out to me: industries.

Utah’s low population more than likely helps them in having so many factories and mines dotted all over the state. This is certainly replicated here in ATS. Salt Lake City in-game looks more like an industrial zone rather than an urban sprawl. The same is true for the nine other major Utahan cities that are represented here in American Truck Simulator. Still, I was a little more surprised to see that the core of Salt Lake City isn’t visitable. That said, an even bigger surprise lay ahead for me in the extreme northern portion of the state. 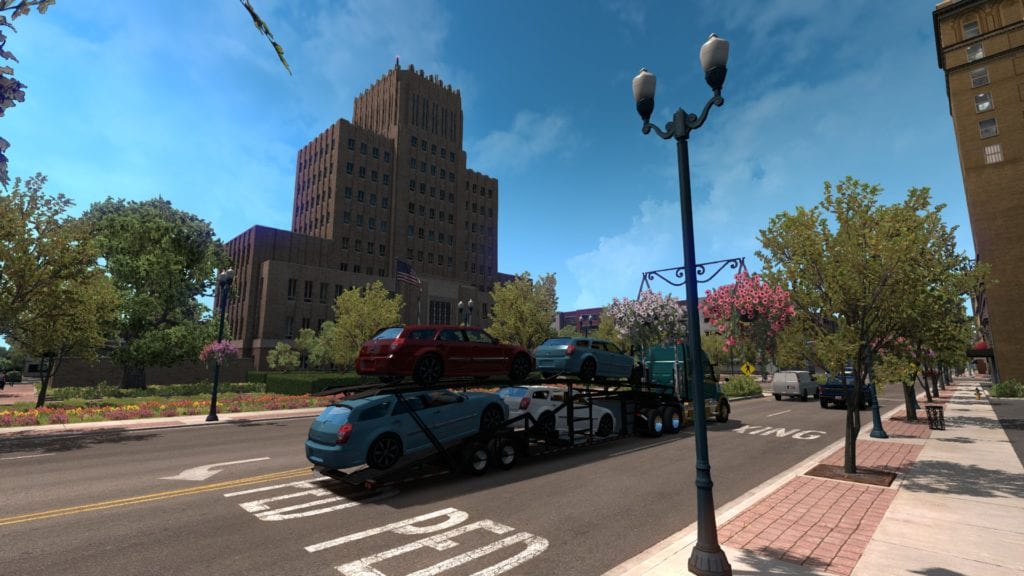 A shot from Ogden, one of the prettier cities in Utah.

I was pleasantly surprised when I made my way into the city of Ogden. This is where things really started to look different, as the posh architecture I’d seen in St. George was on display even more so here. I don’t really know what architectural theme it’s considered to be, but I do know it looks nice (especially when compared to the more rustic areas of certain cities). Adding to that is the gorgeous landscaping and heavy use of flowers and flowering trees, in addition to various parks. The scenery designers really tried their best to capture the natural beauty of Ogden. Driving through it made me wish the whole state looked like this.

Thankfully, Ogden also has a pretty-looking sister called Logan, which is the most northern Utahan state in-game. It also has a lot of man-made beauty, though seemingly not as much as Ogden. Either way, making these two northern cities in particular so pretty wasn’t just an art decision. In the real world, the central and northern sections of Utah have far more greenery than the southern part of the state. As a result, this is also where Utah’s farmlands are located. And there does seem to be quite a bit recreated here in-game, including animated animals. Seeing all of this nature makes the game feel more alive and just adds a different vibe to the drive.

All that being said, I must admit I may have been a bit harsh on Utah’s “dustier” parts. The remainder of my tour proved to me that this state is an all-round collection of beauty. 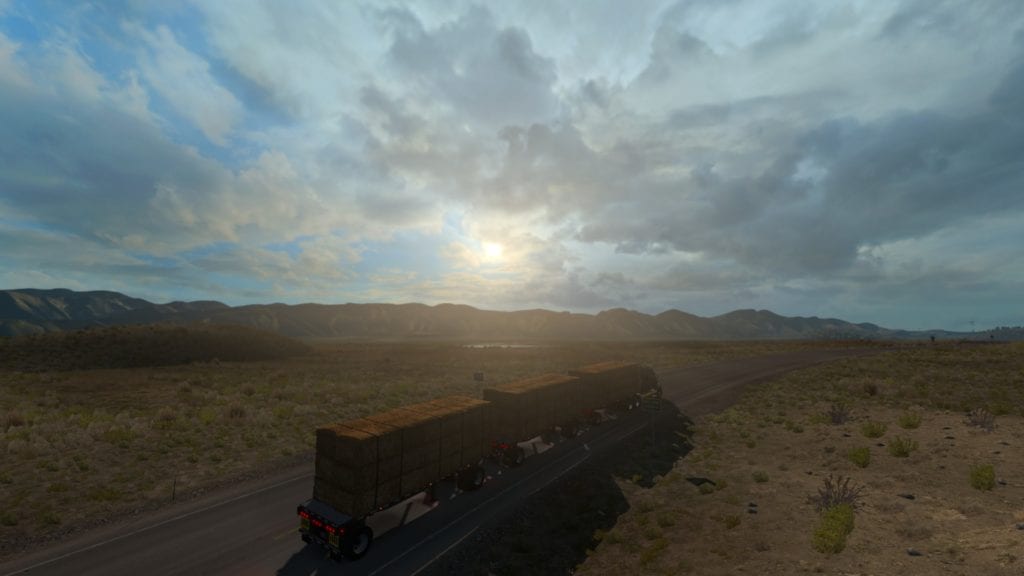 Haulin’ some hay and admiring the scenery.

The city of Vernal is tucked away all by its lonesome off to the extreme west of the state. It hits the same standards of beauty as Ogden and Logan. From here on out, things start to change back to the usual canyon affair.

Headed further south once more, my next encounter was the city of Price. But, it wasn’t as “samey” as the southwest. There are still a few swaths of greenery here, and Price itself maintains the aforementioned posh architecture in its wealthier parts. However, it also has a rustic strip to it that looks like an almost entirely different place. Looking at it that way, the city itself kind of represents the two visual themes of Utah.

The last major in-game city is that of Moab, in the far southeast. This portion of the state is once again all dust — but it blew me away even more so than the trifecta of Ogden, Logan, and Vernal.

Wonders of the road

After spending approximately six hours focused only on visiting each of ATS‘ ten Utahan cities, I had a hunch to check out the other routes into the state that I’d previously overlooked. That was an awesome decision.

As someone who loves geography, I hate to admit that I totally forgot Utah is home to the iconic Monument Valley. A portion of it actually existed in-game in an earlier version well before this DLC pack, though it was eventually patched out. Now, it’s made a stunning return. You can experience it by driving along Route 191 that runs between Kayenta, Arizona, and Moab. I drove along while listening to some tunes during the early morning and sunrise, and it was quite a beautiful combination. It felt like the scene during Cars when Lightning McQueen went on a scenic drive with his love interest, Sally. Ironically, that took place in Pixar’s rendition of Monument Valley. SCS did an amazing job at capturing the natural beauty of these rockfaces in an incredibly sharp amount of detail. It’s a shame this is only one stretch of highway.

The next super scenic drive is Route 89, which connects Salina to Page, Arizona. Get ready to put your serpentine skills to the test here. It has a lot of curves, but the views are most certainly worth it as you meander between the borders of various national parks and national forests.

Finally, the two routes that will take you into northern Nevada (I80 to Elko and Route 6/50 to Ely) offer a great look at Utah’s next natural wonder: the salt flats. Of course, this tour log wouldn’t be complete if I didn’t mention the main thing that gives Utah’s capital its name. 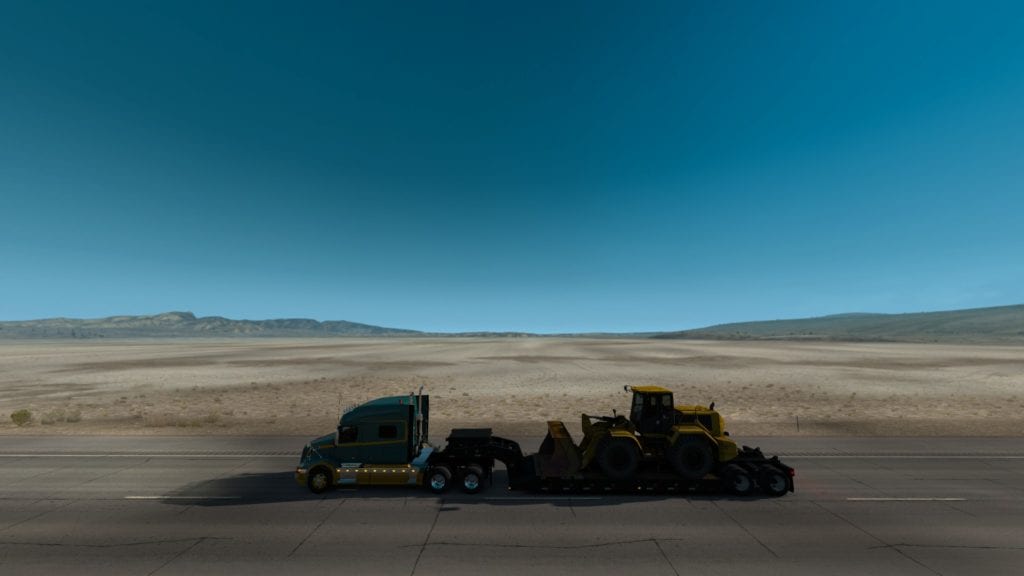 Of course, I had to see the salt flats.

At this point, it should be a given that I really enjoyed zooming around Utah. Had I simply held onto the feeling of my initial impression, I probably wouldn’t have been very impressed at all. But, you really should never judge a book by its cover.

Like the real-life state, American Truck Simulator‘s rendition of Utah is absolutely gorgeous. From Monument Valley to Great Salt Lake, there’s a lot of natural wonders to admire in this package. But man-made beauties are present too, with the quaint towns of Logan, Ogden, and Vernal offering some serious eye candy. All of this is mixed in with the big, fuming factories and chemical plants scattered all over.

Indeed, Utah is quite an interesting mix of beauty and dirty business. Whether you’re a longtime player or someone who’s just getting into the world of ATS, I’d say it’s definitely worth picking up, as it’s better experienced for yourself.

As someone who’s never been to Utah (though I have ironically seen AZ and NV), I have a real desire to go now, thanks to seeing the work of the SCS design team. Just by comparing my screenshots to images on Google, it’s clear they did some serious homework.

Now, let’s see how much justice they give to the Gem State — Idaho.

SCS has done a fantastic job at capturing both Utah's natural and man-made beauty. It offers a huge variety of scenery objects with an amazing amount of detail that will make for some seriously scenic drives in American Truck Simulator.

Oddworld: Sousltorm review — Abe’s back and better than ever