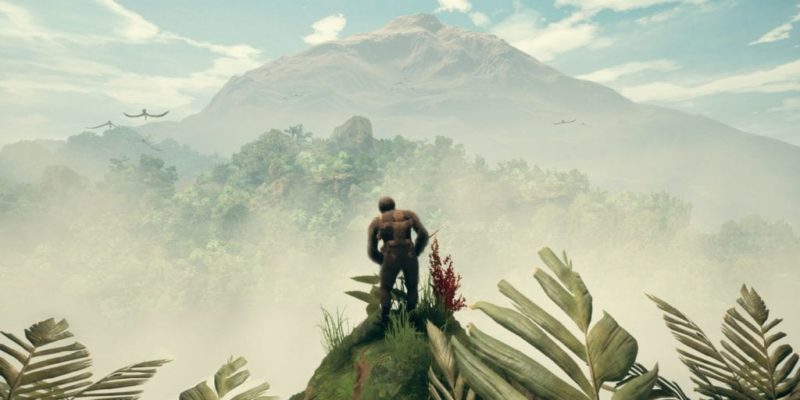 Ancestors: The Humankind Odyssey is a very unique survival game. You’re at the helm during the dawn of humanity, and your task is to lead a band of ancient hominids towards the present day. In this, you’ll have to take advantage of the benefits carried over from generation to generation and steer evolution down the right path. That far-forward sight is what makes Ancestors unique compared to other survival games that I’ve played. You build skills and luck upon genetic mutations in your 10 million year-long journey. You won’t be playing for all of those 10 million years, but don’t be fooled. This game takes a very significant time investment, so you’re going to want to set aside around 60 hours.

Ancestors: The Humankind Odyssey is a survival game that stands on its own two legs

Survival games tend to lean on the player to make sure their characters have enough food and water to survive, which Ancestors does. It doesn’t stop there, however. You also have to manage your sleep, stamina, life expectancy, and a bunch more. I love that all of these systems make sense in the context of your being prehistoric creatures who are starting to develop a new metabolism, motor skills, and lifestyles.

You don’t need to eat food just because a little meter tells you to. You have to eat food because if you don’t it affects how much stamina and energy you have, and if those are not managed it will drain your life expectancy. Lower life expectancy will lead to early death due to falls from reasonable heights, predators attacks, etc. You’re also going to discover food sources that you can’t properly digest. For these, you’re going to have to slowly start to incorporate them into your diet and acclimate your body to them, fitting the evolutionary model. It’s great that these systems fuel the larger narrative of the game and don’t just exist to make it more video-gamey. 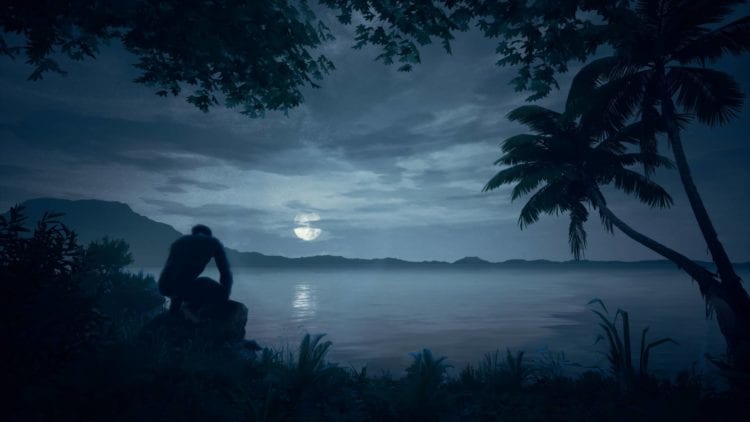 Where Ancestors further separates from the standard survival game is in the way that you build skills. You have a skill tree where new abilities can be obtained, but they aren’t all available right at the beginning. Rather, you will have to do certain tasks in the game to build proficiencies and unlock new abilities. For example, you’re only going to get better at attacking boars by attacking boars. It keeps loyal to evolution as the main theme. There are also genetic mutations that you’ll need to uncover that will lead to some of the biggest benefits that the skill tree has to offer. These pop up randomly and are necessary for skills like learning to better walk on just two legs.

The game, of course, doesn’t tell you how to do a lot of this. The idea is that you need to experiment and discover in the same way that early humans did. This makes the “ah ha” moments really rewarding, but it can also leave you without any direction at times. When you’re struggling to figure out what you can do next, the game can divulge into tedium. I’ve put my controller down and walked away many times due to boredom in these moments, and that feeling can really kill the gameplay flow of a session. 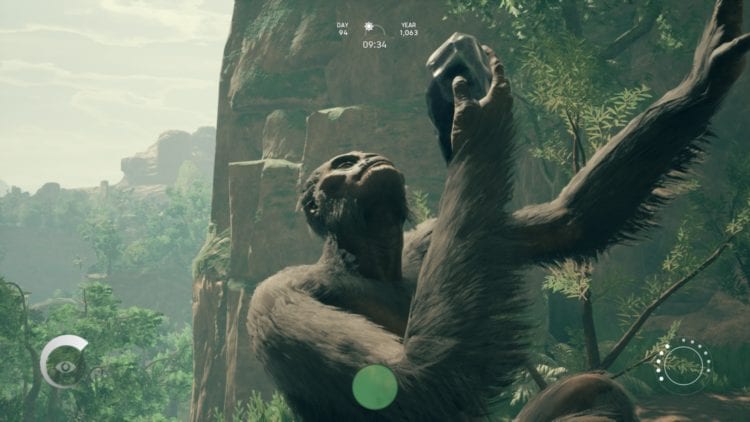 One of my biggest gripes with Ancestors: The Humankind Odyssey is that there is a ton of repetition. Not just in the gameplay itself, but in the cutscenes that you will see dozens of times (which are not skippable at the time of writing). I’ve hit a rock against a stick to craft a weapon probably 2,000 times. I’ve gone through the process of pairing together clan members and mating likely over 150 times (and have had to watch that cutscene each time). You’re going to repeat a lot of the same actions in your 60+ hours with this game. During these times, I found myself pulling out my phone and actively distracting myself from the game, which is a pretty big red flag. 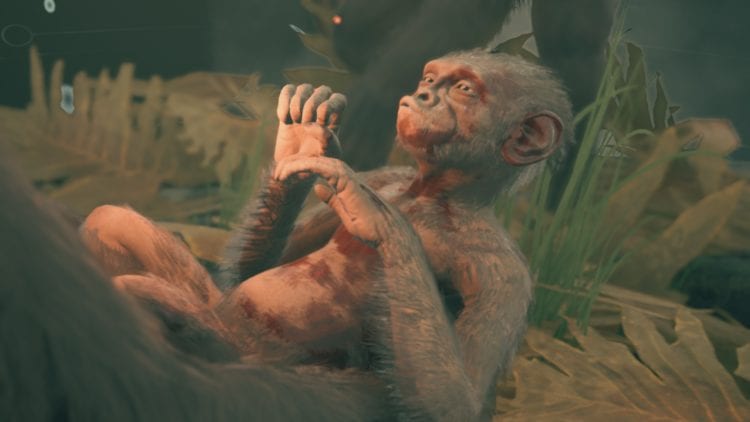 Get ready to see this cutscene a lot.

As the game went on, I had hope that there would be some sort of way to automate some of these repetitive processes, either in a better ability to manage my clan or otherwise. You do later gain the ability to have your clan mimic you, but I was never able to use it to make them craft a sharpened stick or mate each eligible clan member in one quick action. Rather, the mimic ability will let you order them to grab items and put them in one spot or scare off predators.

Thankfully, we now live in a “games as services” world, so continued development will likely improve a lot of these areas.

The game’s setting of prehistoric Africa is really stunning. You’ll start in the heart of a jungle. As you evolve and become more skilled in exploration and self-defense, you’ll start to settle into several different biomes. One of my favorite moments was when I first stumbled out of the jungle into the savanna. Before that point, everything felt dense with trees and completely contained in towering cliffs. The savanna instead is just spread out and feels never-ending at first. It has very few trees compared to the jungle, so you can’t rely on them to take you up and over predators. You really have to change the way you travel in this area, and if you don’t then you’re going to want to make sure you know how to handle weapons. I immediately found a place with water and food to settle and went back to my clan to lead them on a nomadic journey to the new area. All just so I could explore this totally different setting. 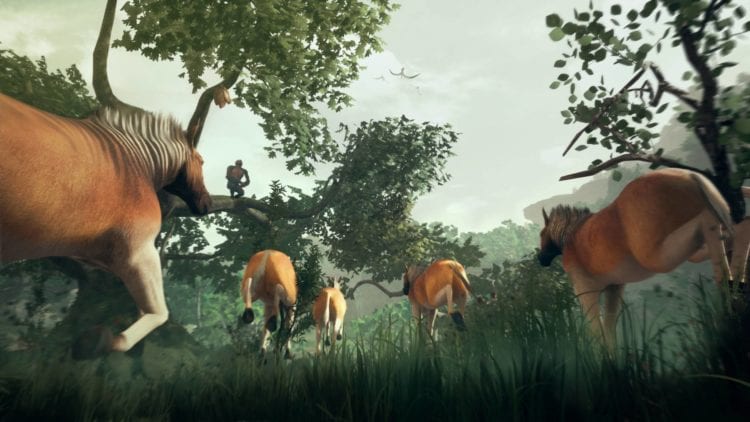 Each of these new areas has its own ecosystem with new plants and wildlife to discover. You have to try new plants to figure out what food sources are available. You’re also going to have to get a feeling for how aggressive or territorial the new creatures are. Most of them behave pretty much how you’d expect. Most will attack you if you get too close and some creatures like hyenas are there to straight-up ruin your day. It’s a great feeling when you learn how to craft weapons to take on some of these foes. The first time I killed a hyena was one of the best moments of the game because they had been such a pain up to that point.

One major flaw is that saber-toothed tigers spawn in too frequently to harass you when you’ve been eating, drinking, or loitering somewhere too long. This is a hard feature to criticize thematically, though they seriously just spawn in right next to you and no amount of watching your back or being cautious will prevent it. Plus, when they pop in is so consistent that you know after a certain number of drinks from a river taken or stalks of food eaten that they’ll be right there to pester you. It becomes a very routine thing when it should be a surprise. All in all, predators spawning in as frequently as they do really dampens your sense of discovery.

Ancestors: The Humankind Odyssey is at its best when it’s enabling you to discover new things and have those eureka moments, and the randomly spawning predators will steal that satisfaction from your constantly. 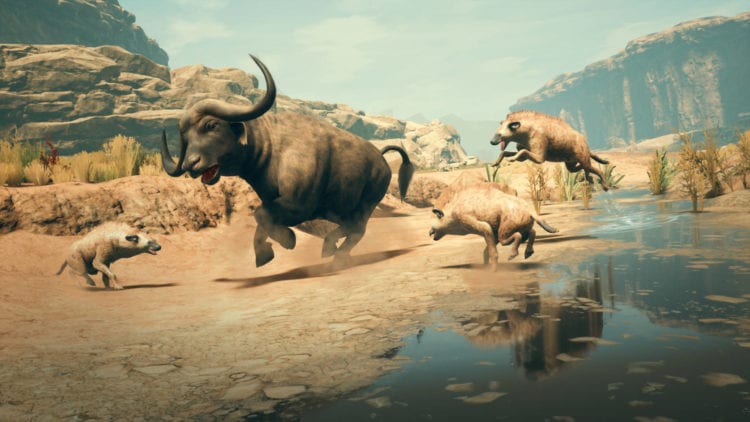 Verdict on Ancestors: The Humankind Odyssey

There is a lot of fun to be had with Ancestors: The Humankind Odyssey. Being dropped into a prehistoric world without much explanation yields a great journey of discovery but can leave you without a sense of direction or purpose for large portions of it. When you discover awesome new locations or the first time when you figure out how to craft something important, the game just clicks. By far the best part of the game is that it intelligently uses survival mechanics in a way that matches the narrative of the game instead of just to give you something else to micromanage. You will definitely get attached to the clan that you are leading down the path of evolution. Losing one to a predator or dehydration can feel personal.

If you’re looking for the next great survival game, this could be it. I hope to see developer Panache continue to expand and add to this game in the coming month because it has a lot of potential.

Ancestors is a great step forward for the survival genre. It has all the pieces you'd expect, including water and food requirements but also a few unique ones. All of these tie into the game in a much better way than in most other survival games. Plus, its narrative of guiding humankind through its early evolution in prehistoric Africa makes for a great story to play in a beautiful place to do it.

Control review – Embracing the weirdness of the world