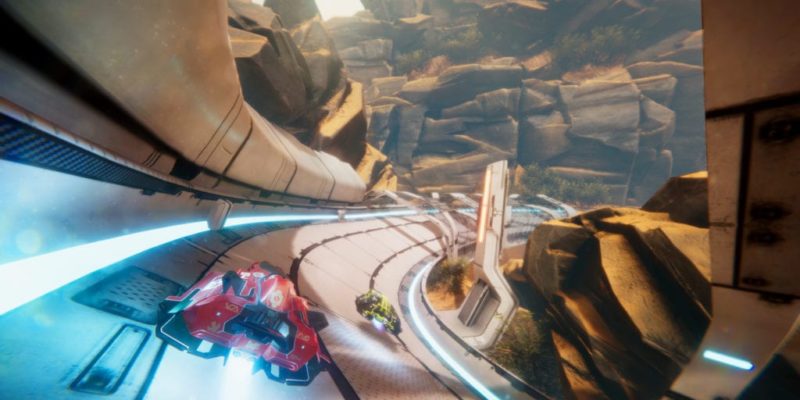 Games such as Wipe-out have long since fulfilled the need for speed and Antigraviator too brings that thrill of futuristic speed racing to the PC. This is a racing game that comes with numerous modes including a campaign mode, online multiplayer and split screen if you want to play with your chums.

The tracks are well designed, but because the game moves so damn fast, it’s hard to sit back and enjoy the scenery. Your eyes are glued to the track looking for pointers to show where the next turn is going to be or avoiding traps dropped by the other racers. The fact that it is so fast is what makes Antigraviator a real challenge.

The campaign mode challenges players to beat computer opponents through a series of leagues with a top ranking allowing you to progress.  In total there are eight leagues with four tracks in each with different winning conditions which mix up the challenges.  Unless you top the rankings there’s no moving on to the next league and it’s time to try again. Thankfully the league tables work on a points system so even if you come sixth out of eight in a race but come top in another you could still unlock the next league giving an incentive to keep playing despite suffering a terrible run on the first couple of tracks. 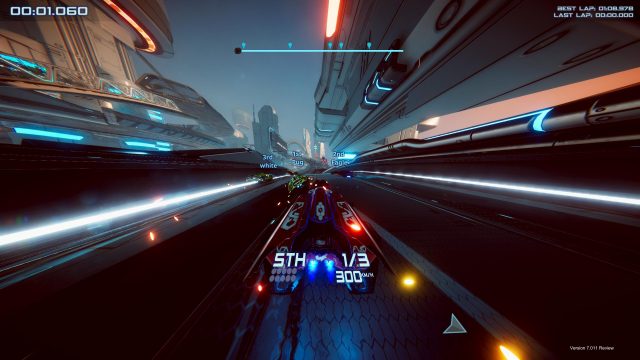 It sounds easy enough but it’s actually quite tricky due to the nature of the gameplay. With tracks featuring multiple routes and traps to slow you down, positions can shift around a lot in a race. Traps also play a huge part in where you’ll end up at the finish line. By acquiring and dropping traps while you race, you can turn the tide quite quickly if you time things right. Traps vary from huge blocks appearing on the track to firing a missile. The only way you know it’s done any good is if your racer suddenly gets a green shield and the announcer informs you a trap has done something. When you are playing against AI there’s obviously less satisfaction when a trap hits but they are still super important.

The breakneck speed at which you fly around the tracks is quite something, As you race around there are speed boost pads to give you a quick temporary bump in speed and there’s also a booster button which activates a quick burst of speed. When you’re going flat-out and hit a speed bump and then also trigger the booster it’s quite intense and unless you have mastered the controls and track layout you’ll end up smashing into the sides. The vehicle physics are pretty good too although a little more sliding action would have been nice.

On the subject of controls, you really need to play Antigraviator with a controller, any other method would be inferior. I tried two controllers while testing this, a Steam controller and a trusty PS3 controller. Strangely enough, the game did not like the Steam controller one bit while the PS4 controller worked like a charm. 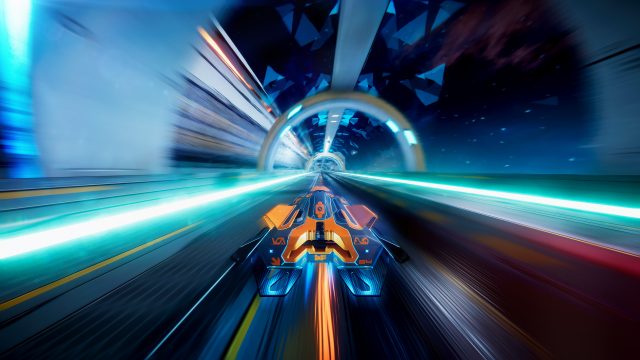 Utilising the left stick and right trigger gets you moving and steering while the buttons activate traps and boosts. The right stick also severs a purpose, the barrel roll. The roll will allow you to evade traps on the track but it can also be used to push other vehicles into the sides of the track. When there are eight vehicles all bunched up it’s pretty hard to see exactly what’s going on as there are sparks and scenery flying past at intense speeds. There is an airbreak too on the left trigger and getting used to using that is essential. That coupled with a roll can help get around tricky bends.

There are a few customisation options for the racers including vehicle type and skins. There are three different types of vehicles all with slightly different stats, and not counting the starting vehicle, the other two need to be purchased with in-game credits which are earned by winning the leagues. Start winning to earn money and more customisation is available. It would have been great to see a few more vehicle types but perhaps Cybernetic Walrus will add more later. There’s certainly enough to be getting on with for now.

It’s worth pointing out that the game is played from the third-person view from behind the vehicle. There is a reverse cam as well so you can take a quick look behind. If there was one criticism I would make it’s the lack of a cockpit view. It seems an odd thing to leave out, and as I understand it, there were no plans to add one for launch. Hopefully, that’s something else that will be added. 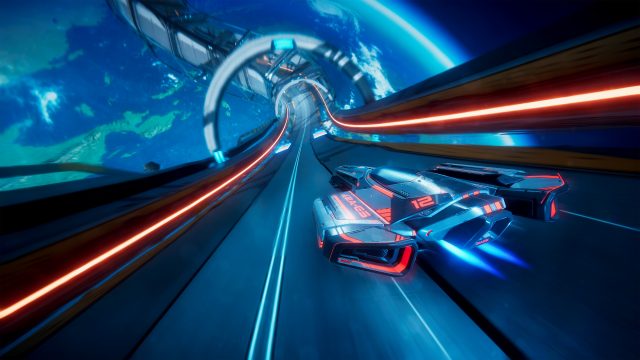 The campaign mode and single races are all well and good but the multiplayer is where gamers will find the most longterm enjoyment. Thankfully there’s a ranked online mode where players can also be sorted by region from top to bottom rank which  I hope players embrace once the game launches.

Over the past week, I have found myself enjoying Antigraviator more and more. The more I have played, the harder I have pushed myself to rank highly in the races. Antigraviator pushes you to play aggressively and master the tracks, and if you do that, you’ll get a real kick out of this. It may not be an original concept but Cybernetic Walrus has created quite a polished and intense racer and I look forward to seeing how they support it in the months ahead.

If you can handle speed then Antigraviator really delivers. A fast and fun racer.