As even the most casual student of mythology knows, the Ancient Greek gods could be a spiteful, arrogant, and jealous bunch. Like spoiled superheroes, they often used their powers to fuck with humanity (both figuratively and literally) and then had the chutzpah to expect continual praise for providing basic services like “making sure the oceans don’t flood everything.” In other words, perfect storytelling material.

Apotheon captures this soap-opera-with-superpowers feeling awfully well, leaving you in no doubt that many of the preening pantheon could do with a permanent vacation. Any linguists reading this will probably have already noted that ‘Apotheon’ means “exalted to the state of godhood.” Pair that with the loose meaning behind hero Nikandreos’ name (“victory of a man,”) and you may have a pretty good idea where this is all heading. 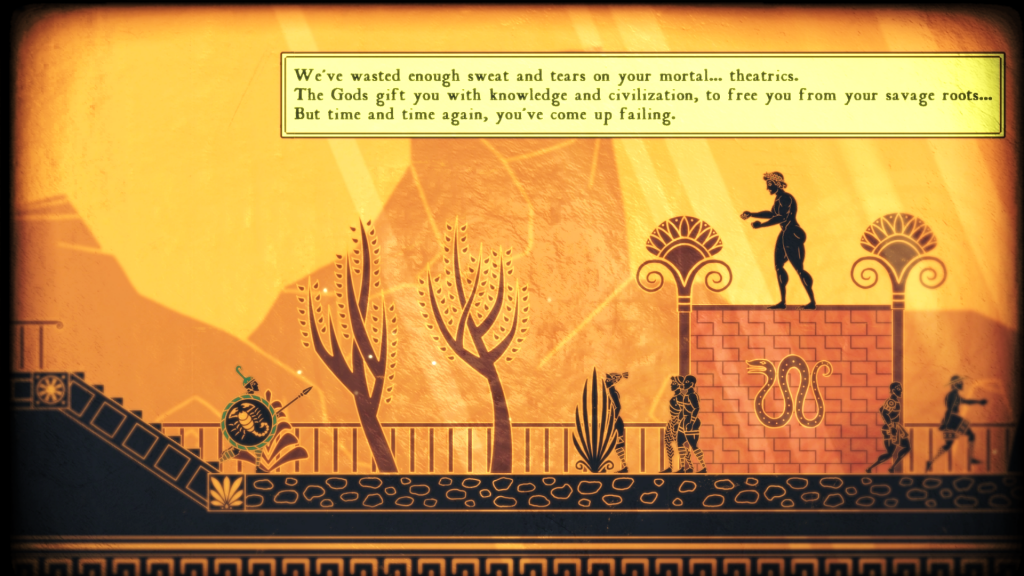 Here’s Apollo, being his typical charming self.

Nikandreos has plenty of reason to be having a crisis of faith. Almighty Zeus, weary with a fifth age of humanity which causes him nothing but disappointment, has decided to just wipe everybody out by demanding that the rest of the gods withdraw their favours. Crops are failing. The forests are silent. Humanity has turned to raiding and plunder, under a sun-less sky.

In the midst of an attack on his hometown of Dion, Nikandreos is plucked from the fray by Zeus’ wife Hera and urged to topple the father of gods from his fortress on Mount Olympus. Hera is none too pleased with Zeus’ plans for humanity, nor with his constant infidelity with other gods, random nymphs and any inanimate objects that happen to catch his roving eye.

While on the topic of things that are pleasing to the eye, it should be fairly evident that Apotheon has magnificent art direction. Designed around the shapes, patterns and figures found on Ancient Greek pottery, the game finds a consistency of tone between graphics and theme that a realist visual style would not have provided. This carries through to some of the sound design, which uses naturalistic wood-block and vase smashing effects to convey aspects like weapons breaking. Said weapons are named with appropriate terminology, like Doru and Xiphos. In addition, passages from Greek sources like Homer or the Bibliotheca crop up throughout. 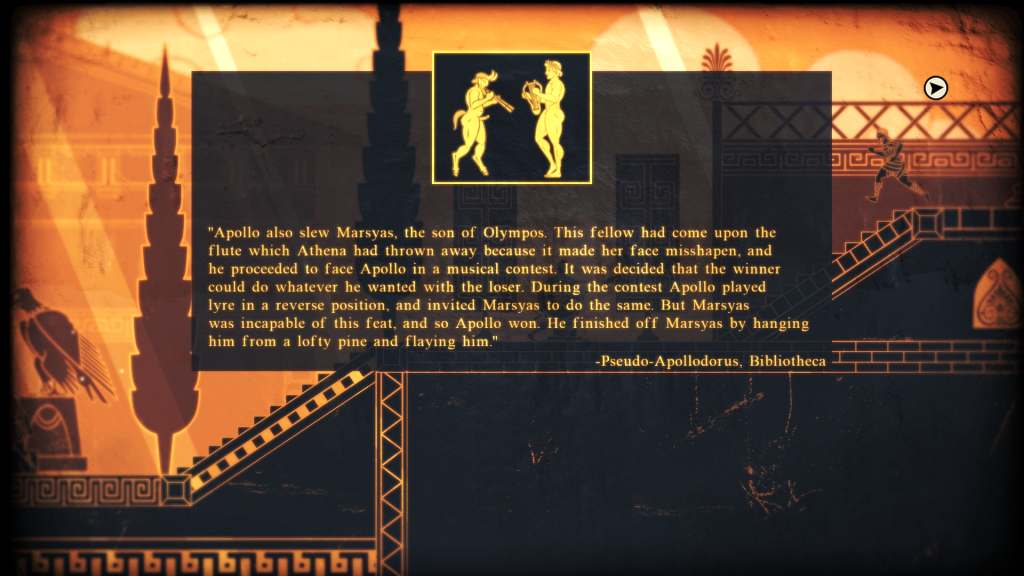 Apotheon adopts a hub-like structure for its handling of progression through the game. The title has two fairly distinct sections, centralised around the marketplaces and dwellings of the Agora and Acropolis respectively. Both of these have doorway spokes, through which Nikandreos travels to reach the domains of various Greek gods. It flirts with the ‘Metroidvania’ concept of returning to previously visited areas with new powers/abilities, but in a much more free-form way than that term usually implies.

For example, after defeating Apollo (who really is a total prick in this game,) you’ll have access to a shield which emits a permanent glow; perfect for the ultra dark realm of Hades. But it’s entirely possible to go through Hades (as I did) forgoing a shield and using a torch in the left hand for light. Much later in the game I came across an item which suggested it would have given me entrance to Apollo’s Palace by non-violent means (instead of me stabbing his bouncer and getting thrown into Apollo’s personal prison.)

You can expect that level of freedom in terms of how you approach missions. While the current set of main missions are always quite sign-posted, Apotheon doesn’t mind what order you do them in, or if you want to just go off and do your own thing within the areas available to you. That means you can scavenge around for equipment, break into houses, start fights with the Olympian guards (who only barely tolerate your presence) or get into a drinking contest with Dionysus, all at your leisure. 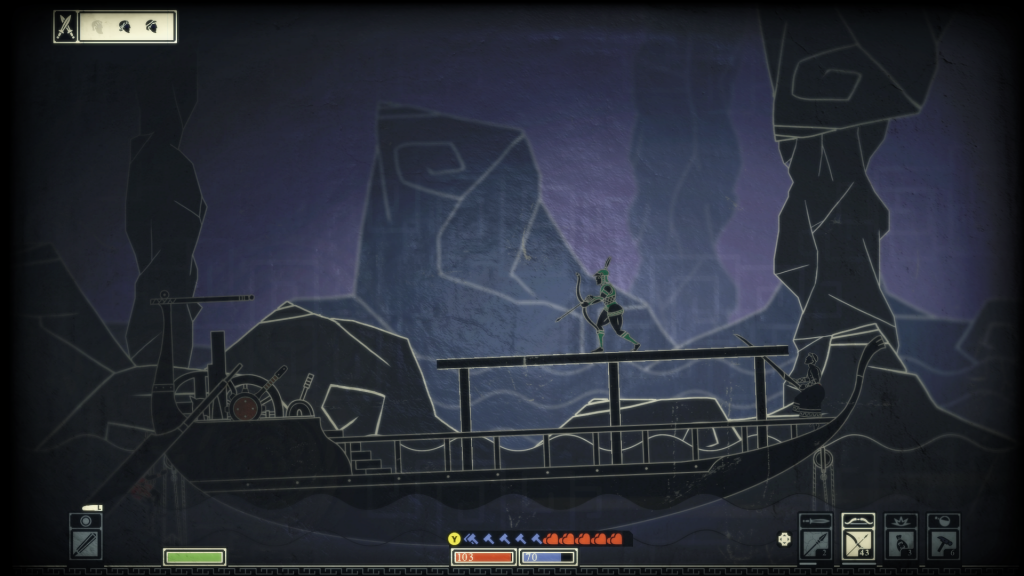 In an effort to get away from Apollo, I voluntarily visited Hades.

Any back-and-forth travel (pretty straightforward thanks to some teleporting shrines) tends to occur for side quests. You might stumble across a key which opens a cave or doorway you’d previously found but been unable to enter. Exploration in general tends to have a pay-off, and some of my earlier searches uncovered a secret cove with a Witch inside who taught me how to conjure wolf companions from thin air. Jason and the Argonauts gets a nod in similar fashion, as you can later learn how to craft Bone Dust to summon skeletons.

As the game progresses and Nikandreos becomes ever more powerful, the side quests do start to suffer a little from diminishing returns. You’ll never come away empty handed, but may well already have discovered the unique weapon that serves as the main treasure. Basic equipment like healing (nector) potions and tossable Greek Fire pots can be crafted from the materials dropped by defeated foes or smashed boxes, so you’ll always emerge from a new area with extra ingredients at the very least.

Apotheon’s main mission branches make good use of the Greek deities’ individual aspects, providing decent variety in both level and boss design. Without spoiling too much here, Athena’s connection to the famous Labyrinth comes into play, Artemis’ boss battle is a test of both hunter and prey, and Ares is a semi-invulnerable, blood-thirsty nutter who wades around rivers of gore while people do battle around him in his name. By the time I’d reached Zeus’ abode, I was nine hours into the game. I’d say it’s probably a couple longer than that if you explore every side avenue. 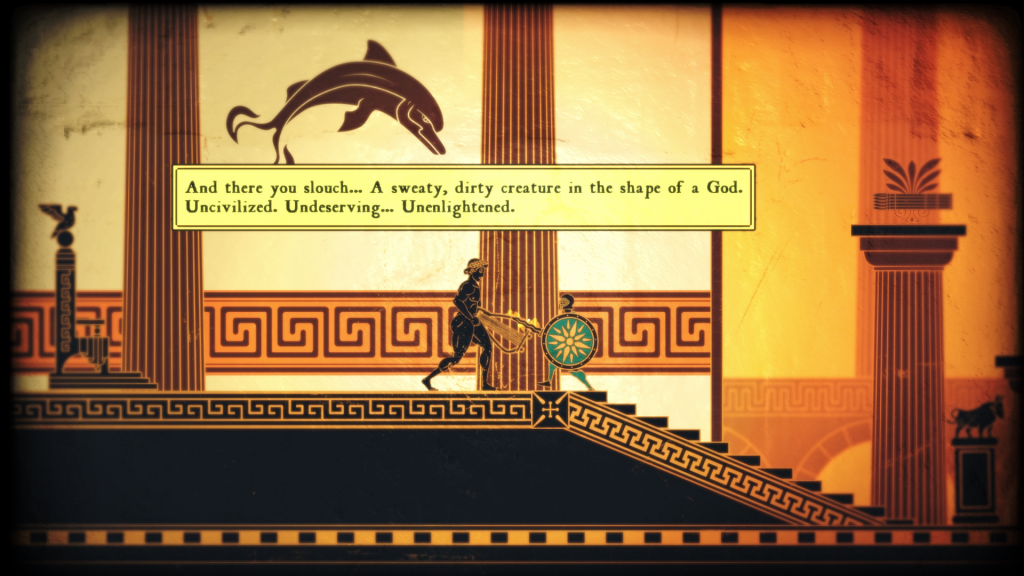 Unfortunately, I was forced to interact with him again later.

Clashing weapons with your fellow Vase-styled dwellers has a certain tactical feel, especially when one-on-one. Shields (which you’ll have for the majority of the game) can be angled all around Nikandreos, providing a barrier against incoming blows or arrows. Position your shield wrong, and attacks can strike under or over it; a tactic you can take advantage of yourself. Your own attacks eat up stamina, so while button mashing is somewhat more viable than the in-game tips suggest (at least on the default difficulty,) it’s not a route to consistent success.

Both shields and weapons have durability, but while it’s disappointing to lose one of your favourites in the middle of a mission, there tends to be plenty of spares dotted through each level for you to “make do” with. It’s only possible to carry one shield at a time, but Nikandreos tends to get pretty well stoked with weapon options at any given moment.

If attacked by multiple foes, or from multiple directions, the tactical nature of block and thrust starts to become a lot trickier. At these points, a minor retreat tends to be the best idea. This also gives you time to juggle through your weapons and items, perhaps in order to lay down some sort of trap for your pursuers, or simply to pepper them with arrows and stone pellets. Whatever you use, there’s a good chance Apotheon’s physics system (which unerringly aims for the spectacular) will send them flying into a crumpled heap. 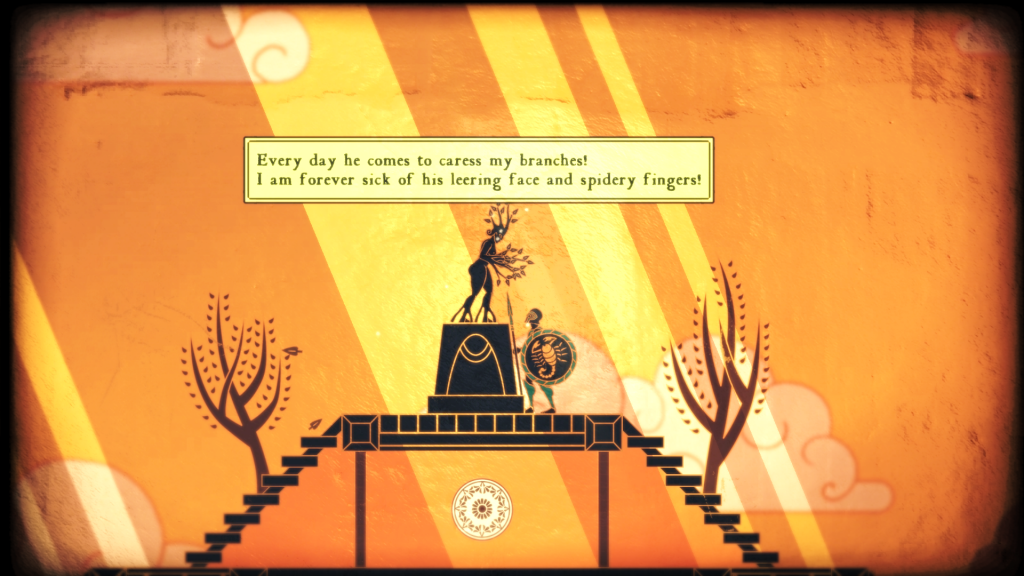 Guess who? GO ON, JUST HAVE A GUESS.

Most of my time was spent playing the game on a basic 360 control pad, but there’s also the option for fully redefinable keys and a toggle for whether you wish mouse control to be directional or positional (to the on-screen cursor.) That latter method felt somewhat weird to me, but the keyboard/mouse controls in general were very much on par with the controller option.

By the conclusion of Nikandreos’ journey, I found myself with plentiful supplies. The substantial amounts of armour, nector potions and repair kits to patch myself up with meant that the final stretches were not exactly fraught with danger on the default Warrior difficulty. There is, however, an ever-present way to toggle the game up to the harder Champion difficulty level (a bit like being able to sign up and resign from the Champions Covenant in Dark Souls 2.) This gives enemies more damaging attacks, allows them to interrupt your strikes and generally makes matters harder. After finishing the game, a further, Olympian difficulty becomes available.

Apotheon includes some local competitive multiplayer which, somewhat bizarrely, is only possible to play with two controllers (no mouse option here.) It’s arena-based and head-to-head, so if you fancy sticking a friend full of arrows or challenging them to a melee-only match (and have the prerequisite number of controllers,) then that’s a bonus. Local co-op, sadly, is not included; though developers Alientrap have expressed some interest in adding it at a later date as a “possible” update. 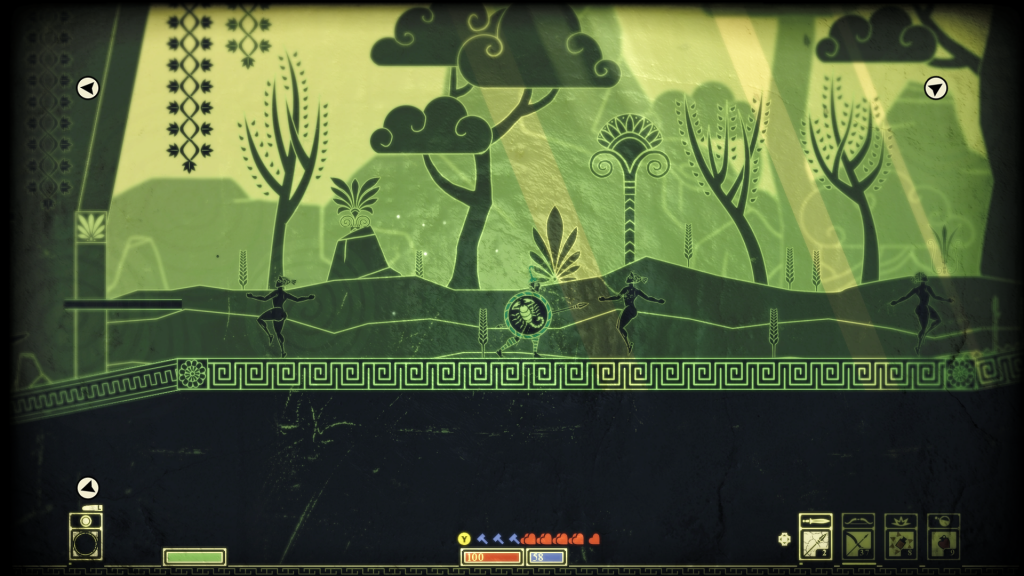 Frolicking with Nymphs is the only way to take your mind off Apollo’s unwavering awfulness.

Predominately though, Apotheon is Nikandreos’ gloriously blasphemous single player adventure to give Zeus a taste of his own lighting bolts. It’s a game with a particularly strong cohesion of art design and theme, and one which gives the player a welcome amount of freedom to pursue allotted, RPG-like tasks in an order and (to an extent) manner of their own choosing. Combat has a tactical edge, with different weapon and item options, ranged attacks, plus environmental objects like burning lamps, all at the player’s disposal. Though the Greek gods would no doubt bicker and pout about some of their in-game character portrayals, even they would be forced to admit some admiration at its creation.

League of Legends RP and IP exploit being fixed by RIOT