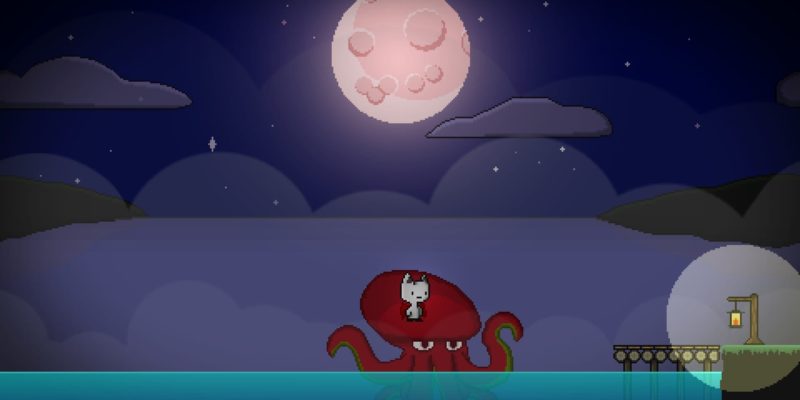 Days before playing it, I had no idea Applewood existed. At first glance, it’s just a cutesy puzzle platformer, much like any other. But as it goes on, it becomes so much more. It’s truly rare to be completely blown away by a game you’ve never heard of, but this is one of those times. One thing’s for certain, though — this is a very special game that deserves a ton of attention.

Applewood was mostly developed by a single person named Garrett Thompson who spent five years putting it together. And it shows in almost every facet of the game’s design and execution. There’s nothing like going into a game expecting another samey experience and then accidentally spending six hours playing through it in one sitting. So, what makes the game so great?

It’s hard out there for an imp

Applewood tells the story of an imp named Ringo. Ringo lives in Sapling Village with several other animals, where they subsist on the apples that grow around them. They can’t grow these apples themselves, and when a calamity causes the village to lose its food source, Ringo embarks on a quest to restore the supply. 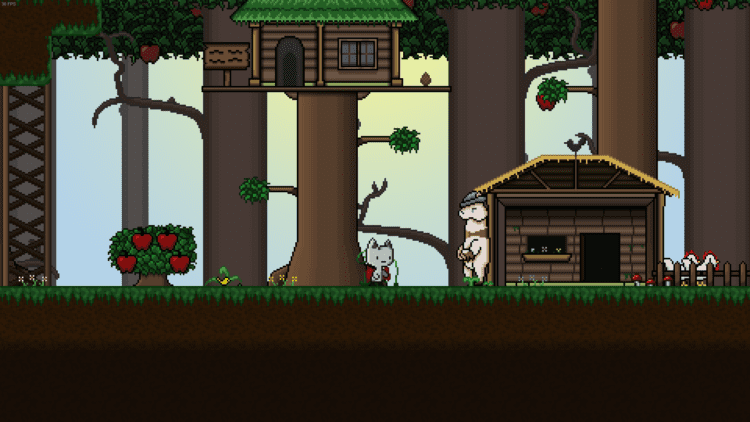 There’s a fair bit of dialogue in Applewood and it’s extremely well-written. The conversations are packed with personality, oftentimes funny, and other times heartfelt and thoughtful. There’s a really clear sense of the game’s comic timing as you see character portraits change colors and faces for a split second to accentuate the text. The overall story also takes some surprising turns, but it all works very well.

Applewood alternates between platforming sections and puzzles and often mixes the two as well. The platforming is wonderful. The controls are precise and intuitive. Ringo has a stamina bar that recharges quickly and gets used when he jumps or glides.

Gliding functions by holding the jump button down while in the air. Ringo can also wall jump. But if he runs out of stamina at any time, he’ll fall to the ground and won’t be able to do anything for a couple of seconds while the gauge fills again. The way that the platforming works is so clear that sections that would be maddening in other games are instead a joy here. I love gliding around and wall-jumping in this game. 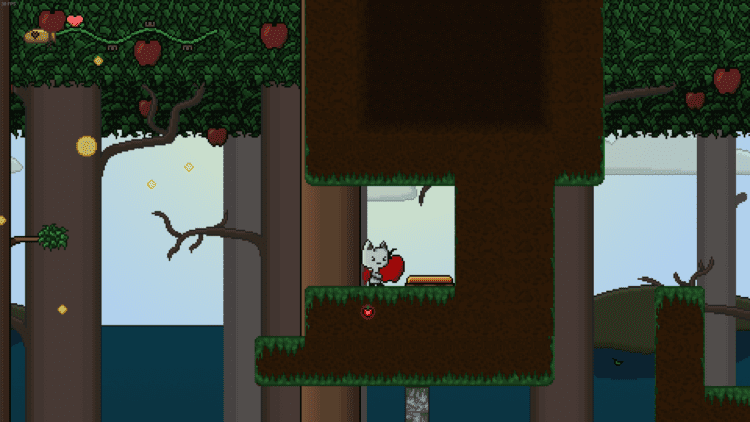 Just a stone’s throw away

Interestingly, there’s not really any typical combat in Applewood. Ringo doesn’t have a melee attack or any weapons. He can, however, pick up items and throw them. Similar to Super Mario Bros. 2, you can pick items up, throw them at enemies, and then pick the dazed enemies up and throw them as well. You can pick items up simply by walking by them and pressing a button. Tapping the button again will see Ringo drop the item where he stands, while holding it will cycle through your trajectory options.

The only aspect of the controls that I feel could have been better is how this works. Having it go through the whole trajectory instead of just entering your throwing stance directly can make it take valuable extra seconds to line up your shots. It’s similar to the way egg-throwing works in Yoshi’s Island, but Applewood often requires a good deal more precision in regards to throwing. This is due to the puzzle aspects of the game.

Most of the puzzles involve grabbing items and moving them throughout the levels in order to have them weigh down switches. Sometimes you need to just carry items to other places for other reasons, though. Ringo moves more slowly and is weighed down while carrying things, so you’ll need to carefully choose where to throw items to be able to get them where they’re going. This also extends to gliding, requiring you to throw items onto ledges that you can’t reach while your hands are full. 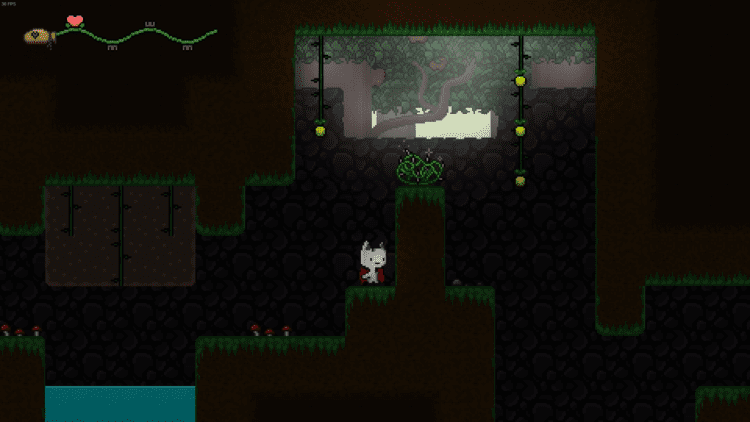 The design for both the platforming and puzzle-solving are both pitch perfect for the most part. Almost everything is just difficult enough to be challenging without being easy or overly frustrating.

Applewood‘s world is interconnected, but it’s not Metroid-like. The areas themselves are very clearly laid out, making it difficult to get lost. The variety is also good, with locations such as a forest, a mine, and mountains. The level design itself makes excellent use of space, with practically none of it being wasted or without purpose. It’s all so expertly honed and focused that it’s hard to not appreciate the game’s design philosophy. There generally isn’t a need to backtrack, but there is a fast travel option you can obtain in the opening area, plus a variety of collectibles to find.

There are also six heart containers that can extend Ringo’s health. These are represented by a health bar that resembles a plant, with each heart being a crop. In addition to being adorable, it also fits well with how important growing food is to the game’s themes. You can even find seeds by eating to heal yourself in the world, which you can take back to the village and use to grow crops for a sidequest. 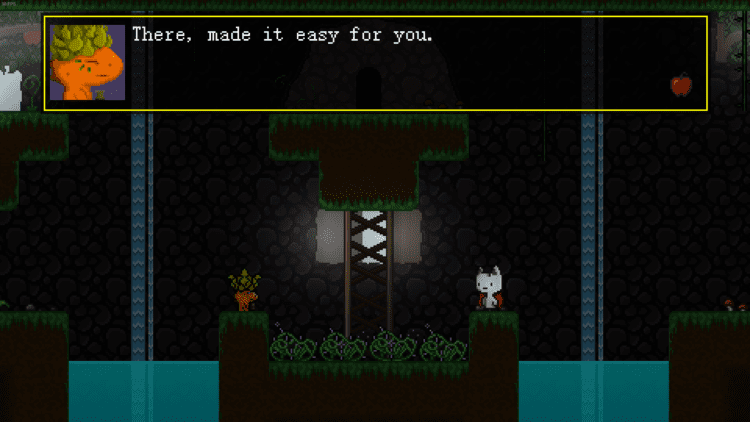 There isn’t combat per se in Applewood, but there are action sections. The game has a handful of creative boss fights and battles against a few enemies. For instance, early in the game, you repair a robot with a light attached to him. You can then shine your light on ghosts in order to fight them off. And the game frequently changes up these scenarios in interesting ways, such as having to fight bomb-throwing enemies by throwing their bombs back at them before they explode. The boss battles themselves are also quite fun. These are really more puzzle fights than action fights, but they’re satisfying just the same.

Applewood‘s main quest isn’t very long and will likely take most people around five or six hours. There is a healthy amount of side content, such as finding collectible carvings to help a villager not get evicted or finding other things in the game world. There’s even a tough bonus dungeon that you have to do without continuing. 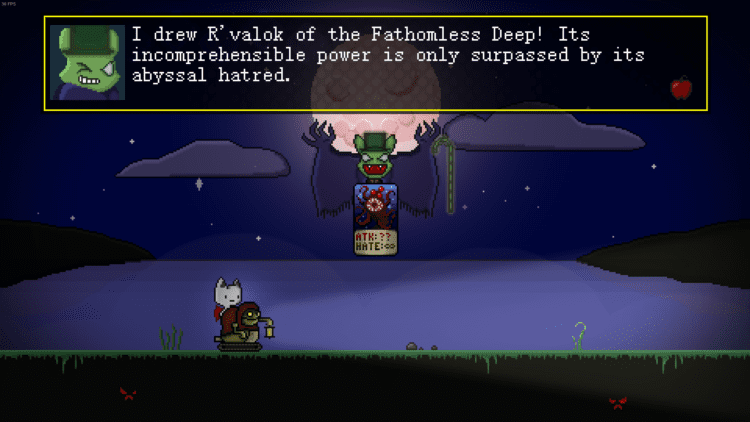 Definitely worth the time

Applewood is mostly a pretty standard-looking sprite-based game. The sprites are well-animated, with Ringo in particular sporting some very funny and subtle movements and reactions. The locations are varied as well, but there’s some really impressive sprite work and surprising visuals along the way. The end, in particular, has some striking imagery that I won’t soon forget. Aside from the aforementioned trajectory cycling and the lack of a map, there’s very little to find fault with here.

Overall, I really can’t recommend Applewood enough. Not only is it well-written and extremely well-designed, but it’s just a really engrossing experience. It isn’t particularly long, but its story and gameplay make it stand apart from a very crowded genre. This is honestly one of the best games I’ve played this year, and if you enjoy platformers or even pixel art games in general, I highly suggest you check it out.

Applewood has a ton of heart and great gameplay to back it up. The story, controls, and game design are all top-notch. We wholeheartedly recommend this one.