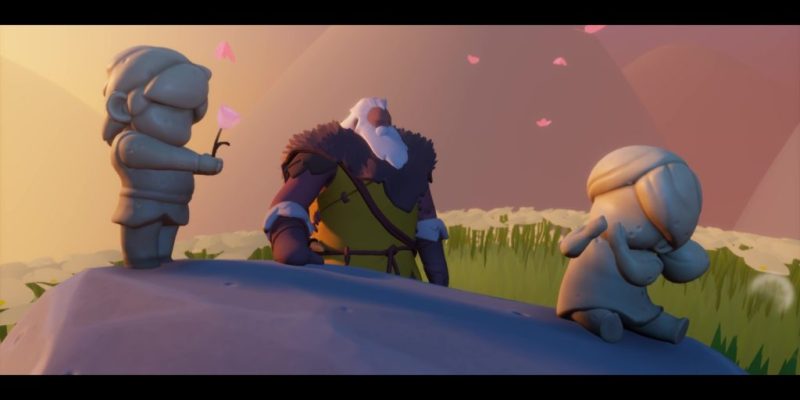 Arise: A Simple Story, the debut game from Barcelona-based developer Piccolo Studio, is infused with an incredible amount of artistry. Everything from the non-traditional protagonist, to the creative level designs, and breathtaking soundtrack demonstrates a massive amount of skill and attention to detail to the first-time effort.

Arise begins at the end. The nameless protagonist, an Old Man who appears to have lived in a pre-historic era, is burned on his funeral pyre and his soul awakens in the afterlife. The hub world of limbo is a cold, desolate place that’s covered in snow. Players then approach a glowing circle and kneel inside of it to enter a new world. 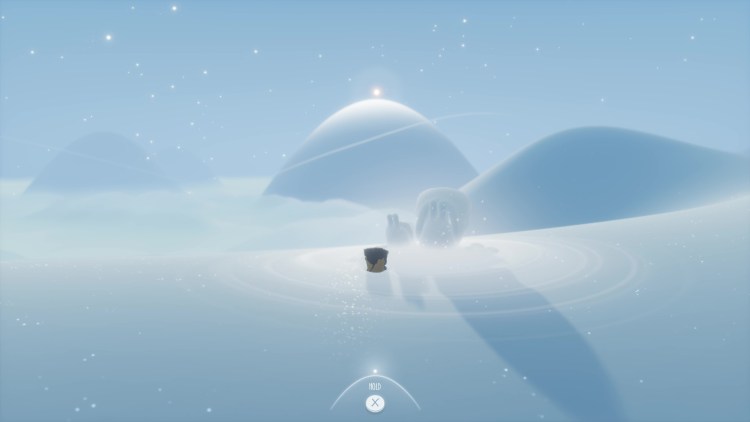 A funeral pyre leads to a cold afterlife.

Told without dialogue, each stage recounts a period of the Old Man’s life, taking players on a journey through all of his life’s joys and tragedies. These are afterlife memories, so details become exaggerated and sometimes metaphoric, like gigantic sunflower towers that tilt toward the moving sun or chasms splitting the land open. The vibrant stages mainly center on his lifelong love, with the first two taking place in his childhood. But things quickly shift to adulthood, and with it the level designs and mood.

The Old Man has the ability to manipulate time, sending it backward or forward within a fixed length defined by each level. The Old Man is still free to move around while the environment, and its creatures go back-and-forth along fixed paths. For example, the first puzzle requires players to rewind time to recede water long enough for the Old Man to step onto a wooden plank. Then players send time forward again to fill the water up, lifting the platform and the Old Man up to the top of a tall stone pillar. 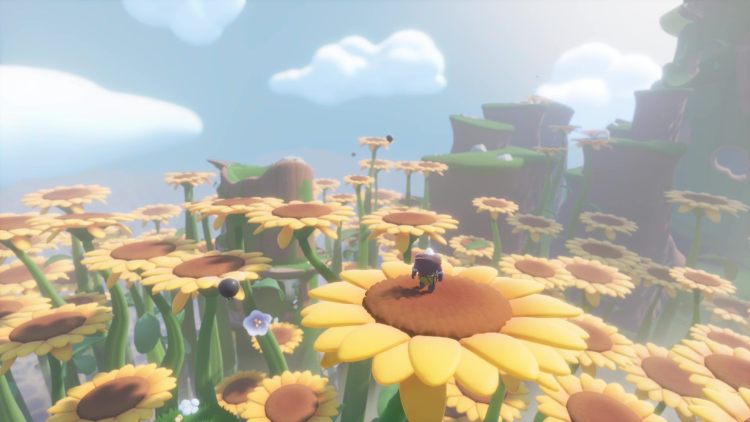 Later puzzles are a bit more complex, requiring players to freeze time at just the right moment, swing across chasms, ride atop creatures, and time changes with jumping. But the gameplay remains relatively straightforward and easy to understand.

Arise: A Simple Story is a fairly short game that can be completed in an afternoon. But other than the collectibles, which are drawings that add some extra details to the story, the game doesn’t have too much replay value.

There aren’t alternate solutions to the platforming puzzles nor is the story difficult to figure out. The game may be beautifully crafted, with excellent graphics and a stirring soundtrack, but it’s subtitled “A Simple Story” for a reason. Unfortunately, keeping things simple also means that players are likely to get everything they need out of the game after one go.

The PC version’s keyboard controls work acceptably well, but I ended up using a gamepad for most of my playthrough. Some puzzles require nuanced control, especially when traversing narrow and/or slippery walkways. On the gamepad, the right thumbstick rewinds or fast-forwards time while the left and right arrow keys do it on the keyboard. Meanwhile, the game handles the camera control as players explore and try to find paths through each level. 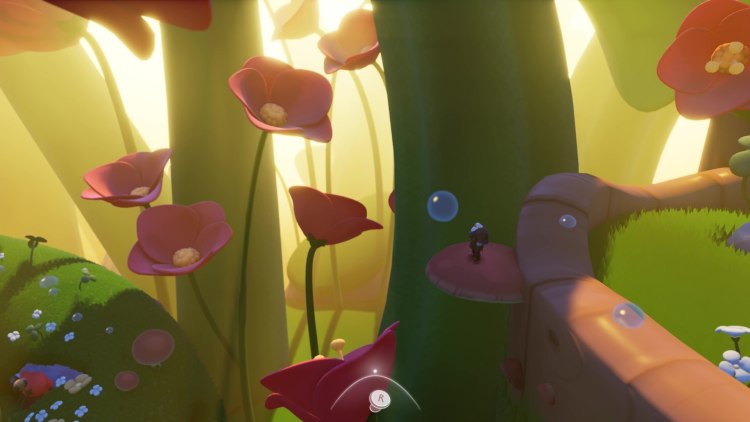 But while the controls are easy to understand, Arise: A Simple Story can sometimes feel like it’s working against itself. The main issue is that it’s ridiculously easy to slip off edges. There’s no invisible stopper to keep players from moving too far, and the Old Man doesn’t catch himself when he falls. This led to numerous frustrations, as I walked to the edge of a flower or ledge just to watch the Old Man slide off and perish. Worse were the times when I practically made a jump but just missed the landing. I had to watch over and over again as the Old Man bumped against the edge of an object, but never reached out to grab hold and pull himself up.

The other issue is that it was sometimes difficult for me to judge distances and perspectives, especially when a landing wasn’t directly on the left or right. I often had to learn by trial and error how far I needed to nudge a character to have him line up with a landing spot. This problem is exacerbated by how the jump controls weren’t always as responsive as I wanted them. Plus, the Old Man is kind of fragile and will perish if he falls from too great a height. This led to a lot of second-guessing and frustrations when it came to the numerous platforming puzzles. 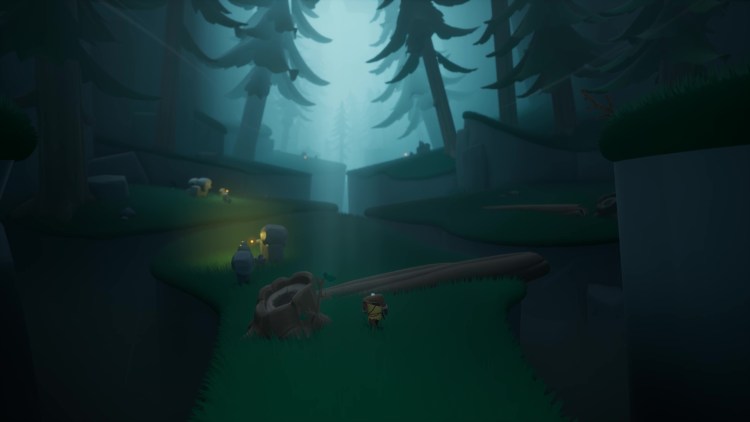 The mood quickly switches from bright to dark as the man grows up.

A button needs to be held down for the Old Man to hang on to hand-holds while climbing. Combined with the handful of time control abilities, it sometimes feels like the game is pushing the envelope of its own simplicity rules. Additionally, Arise makes a point of introducing something new with each stage. That could mean having to freeze time or riding waves of light to travel across the stage. Usually, this means that there’s something novel to discover with each unique stage. However, the game doesn’t always do a good job of explaining what some of the gimmicks are.

For example, there’s one stage where I had escape a horde of oncoming attackers, but the Old Man refused to climb the rocks whenever I reached the designated area. Arise doesn’t hand out hints, so I thought that it might have been a game glitch. However, I discovered that he couldn’t jump because he was waist-deep in water and I needed to shift time to drain the pool. This is the only time the Old Man ever has to jump from inside a body of water in the entire game, and I didn’t like how a one-off like that was casually tossed in there for players to figure out.

Fortunately, the game has a liberal number of checkpoints, so I never had to restart too far from where I perished. Still, having to retry a puzzle several times because the main character didn’t have enough self-preservation instincts to pull himself back up is always annoying.

Too simple to cooperate

Arise: A Simple Story includes a cooperative mode where one player moves the Old Man around while the other manipulates time either from a second gamepad or the keyboard. On paper, this sounds like an ingenious way to get couples playing together, especially if the second person is a more casual player. However, things kind of fall short in its execution.

The stages and puzzles don’t change to accommodate multiple players. So, there’s no sense of surprise or discovery if one has already played through the game solo. For me, things pretty much came down to me telling my partner what to do and when to do it so that I could jump, climb, and swing my way through.

But even if we were both inexperienced, there’s still an inescapable problem. It simply isn’t much fun to be in charge of two or three buttons, waiting for cues like, “raise/lower the water” from the one who is actually playing. Even with some of the later puzzles where timing becomes more important, there’s a feeling of being little more than an elevator operator than being an indispensable co-op partner.

Perhaps the game is a victim of its own minimalist design, and the mode is well-intentioned, there simply isn’t enough for the second player to do besides being bossed around.

Although Arise: A Simple Story has its share of flaws, the experience is well worth the time. The graphics are beautiful, the levels are incredibly creative, and the musical score is deeply moving. Taken together, Arise is an excellent first effort from a new game development studio. If this is Piccolo’s first go at making a video game, I can’t wait to see what they do next.

Arise tells a simple, yet moving story with beautiful graphics and incredible musical score. However, its gameplay sometimes tends to work against itself, despite its intuitive controls.

Capcom may be revealing new games at Jump Festa this December