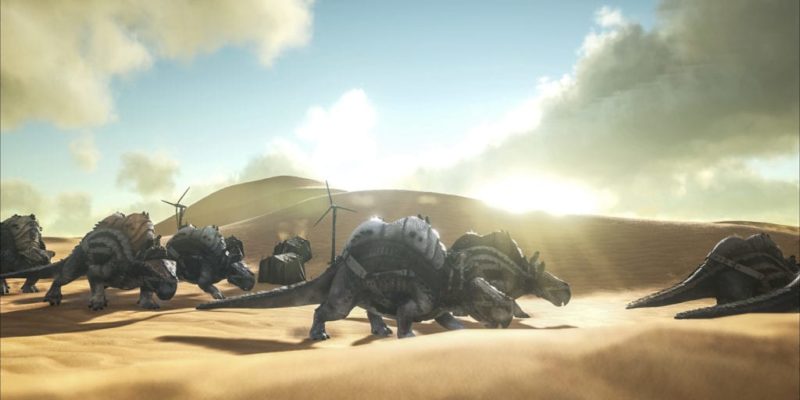 In a move that appears to have drawn ire and revenue in equal measure today, Ark: Survival Evolved developers Wildcard Studios have released a DLC expansion for their Early Access title. Ark isn’t actually finished yet, and has been in Early Access since June 2015, but it now has a $20 DLC add-on called Ark: Scorched Earth.

Even if you’re enjoying Ark (and plenty are, it consistently pulls great numbers on Steam), this seems like an audacious move. Players have bought-in to Early Access to fund the development of the game, and engage with developers who (as the Early Access FAQ puts it) “ship early, involve customers, and build lasting relationships that help everyone make better games”. There’s nothing inherent to that arrangement that says don’t release some paid DLC while your main game is unfinished, but until now most studios seemed to have refrained from doing that as a matter of common decency.

Responses to Wildcard’s decision have been mixed. Recent reviews have trended towards the negative, and the Ark subreddit discussion on the topic doesn’t seem too impressed either. That said, at the time of writing the number one seller on Steam is … Ark: Scorched Earth. Which means while they may not be quite so vocal about it, plenty of people are absolutely loving this move.

While Ark has been tremendously successful, clues to the need for further revenue may be found in the resolution of a court case back in April 2016. Wildcard were sued by Dungeon Defenders developers Trendy Entertainment over a breach of contract, and the case was eventually settled out of court. Settlement figures have not been officially released (as they generally tend not to be), but unconfirmed sources suggested the amount could be as high as $40 million USD.

By Kevin Foley59 mins ago
News