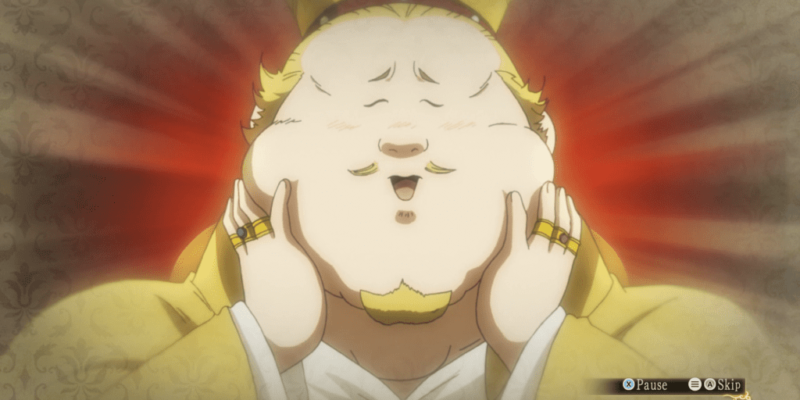 When Dynasty Warriors 8: Xtreme Legends showed up on Steam in May 2014, it was something of a welcome novelty. Musou titles had made it to the PC before (though often only in Japan), but that release was the first one western PC users had seen in a fair while, and signaled the beginning of a consistent porting policy. Since then, entries from the Samurai Warriors, One Piece Pirate Warriors, and Dynasty Warriors: Empires series have all made it across to this platform.

Arslan: The Warriors of Legend is the latest Musou title to arrive on our digital shores (read our PC port impressions for more details on this version). It has a somewhat lengthy heritage trail, being most directly based on a recent anime series, which finds its own basis in a series of 1980s fantasy novels (The Heroic Legend of Arslan) by Yoshiki Tanaka … which in itself is based on a much older Persian saga called Amir Arsalan.

While it’s always welcome to receive these games on PC, Tecmo Koei’s technical porting record has been average to poor. These releases tend to be missing at least one aspect important to PC players (be that arbitrary resolution options, a frame-rate above 30, or any sort of proper mouse support), though some have shown incremental improvements since Dynasty Warriors 8: XL came out. To read about the more technical aspects of Arslan’s port, head next door to this separate article. Short version: performance above 30fps seems a bit variable, and you’ll need a gamepad again. 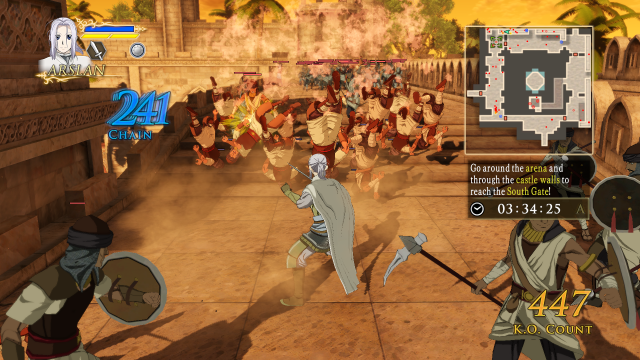 Don’t worry, those hundreds of men I just set on fire will only be ‘K.O.-ed’.

Unlike Dragon Quest Heroes, which borrowed some features from the Warriors series but ultimately fashioned a sort of party-based tower defense game of its own, Arslan: The Warriors of Legend follows the traditional model in a fairly rigid manner. In fact, it even feels like a bit of a throw-back to pre-Dynasty Warriors 7 games in terms of its simplicity.

There’s no using different weapon elements to counter officers in a rock-paper-scissors type way, nor any Samurai Warriors 4-II style manual switching between characters. It’s mostly Arslan and chums doing straightforward combos, building up the special attack meter by wading knee deep in ‘knocked out’ foes, and then unleashing pyrotechnic hell on whoever is unfortunate enough to be the main target of a particular mission.

The game’s main story mode draws heavily from the anime, following the same storyline, step by step, and using footage from the show as between-mission cut-scenes. You actually end up seeing quite a bit of the TV show (the Japanese version, the English dub actors aren’t present in this game) because the post-mission wrap up and pre-mission build up often consists of three or four little scenes in a row. That can sometimes last a good five minutes or so.

Arslan’s tale is a pretty natural fit for a Warriors game, as it delves into similar territory to Romance of the Three Kingdoms; sweeping scope, bloodline conflicts, coming-of-age rules, stoic champions, and various other acts of treachery and heroism. What is slightly unfortunate is the game’s somewhat abrupt ending. Since the anime version’s first season concludes with Prince Arslan only part-way through his quest to reclaim the nation of Pars, so too does Arslan: The Warriors of Legend. If you’re not aware of this, seeing the credits suddenly roll after a stirring cry to march on and reclaim the capital will probably be a bit of an unwelcome surprise. 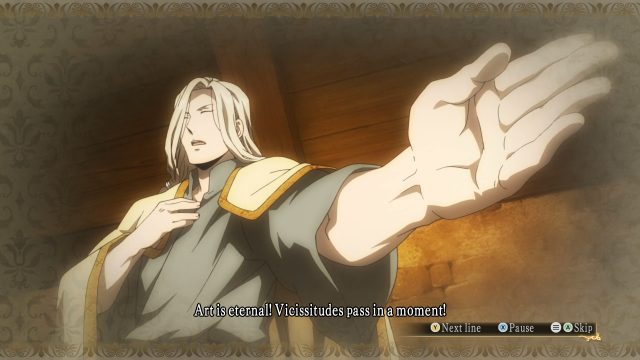 And so does the climax of this game, unfortunately.

Arslan’s battlefields and castles, filled with gormless troops to mow down with gigantic weapon sweeps, will be familiar to any Warriors player. So too will the majority of the mechanics, but this game does toss in a couple of ideas that may be new to the series (having not played all of them, it’s hard for me to say for sure).

First, there are cards. In the past couple of years somebody passed a mandate that power-ups can now only be represented by cards in videogames, and Arslan: The Warriors of Legend has dutifully obliged. This isn’t strictly a new thing in Musou because you’ve often been able to modify and augment your characters with stat boosts (usually via upgrades on weapons), but the manner of presentation is a little different. Cards are earned by defeating officers or completing an objective in fine style, and can be applied to a character at any time. The amount you can stack on there is limited by the character’s level. Special ‘sets’ provide additional boosts, offering a minor incentive to hunt down a specific addition to your deck.

Card bonuses are a passable diversion, but they don’t seem hugely necessary at the default Normal difficulty. Arslan is pretty easy, even by Warriors standards, to the extent that towards the latter stages of the story I was wishing I’d started on Hard (‘Extreme’ is also there as a further step up). Health items are everywhere, and nobody outside of bosses is going to put a dent in your life bar.

The second mechanical quirk proves to be more practical during battle. When officers and named bosses are about to unleash a wound up attack, it’s now possible to dodge out of the way. When executed correctly this temporarily slows time and allows your character to get in an unreasonable flurry of attacks. Useful, because several characters now have regenerating ‘shields’ which need to be whittled down before you can have a crack at their health pool. 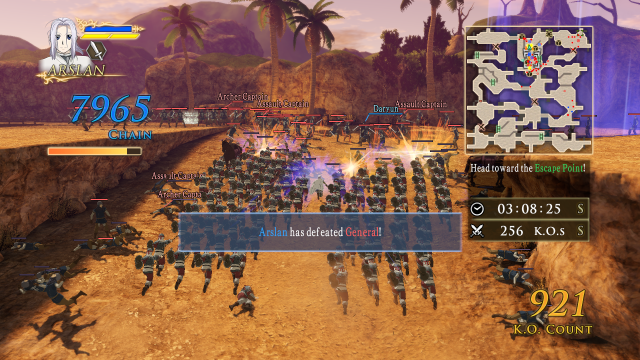 Just so you know, there’s an achievement for getting a chain of 50,000.

Finally, there’s the Mardan Rush; a battlefield strategy particular to Parsian culture (although I’m not sure why, since it’s mostly just a bunch of blokes charging at something). Mission events sometimes demand that a barrier be broken down, or some catapults destroyed, or some other such point of tactical interest smashed to bits. When this happens a Rush Zone pops up on the map, allowing whomever you happen to be controlling to put together a unit of cavalry, infantry or archers, and then watch a chain of attacks rocket upwards into the tens of thousands.

Chaining a ridiculous number of attacks with straightforward, two-button combos is pretty much the heart of any Warriors title, but the soul tends to reside with the characters. The more absurd, the better. Arslan: The Warriors of Legend comes up a little short in this category. It has far fewer characters in general than something like Dynasty Warriors, and a lot of them (in-keeping with the nature of the story) are a bit po-faced and serious. Arslan himself is just a teenager learning the rules of strategy and sound governance, while his main protector Daryun is a suitably terrific fighter but also rather humourless (and seems to spend half of his missions having to rescue Arslan).

Others, like genius tactician and art-lover Narsus have a bit more spirit to their manner which carries over to their attacks (he sets up an instant easel and splashes deadly paint on everyone). Meanwhile, the Robin Hood-esque Gieve is able to use his lute-sword combination to leave menacing orbs of music around the place, ready to be ‘detonated’ at an opportune moment … when he’s not sleazing after Lady Farangis like a horny executive from Mad Men. Farangis herself, along with youngsters Alfreed and Elam, is handy with a bow, but also typifies the game’s fairly single-dimensional characterisation. She’s a priestess. She uses a bow. Gieve fancies her. That’s … about all we know.

There’s likely much more character development in the show itself, but it doesn’t really come across in a story mode where you may only end up playing as a particular character once or twice across the 9-10 hour completion time. The focus, in both missions and cut-scenes, tends to be on the key players of Arslan, Daryun and (to an extent) Narsus. 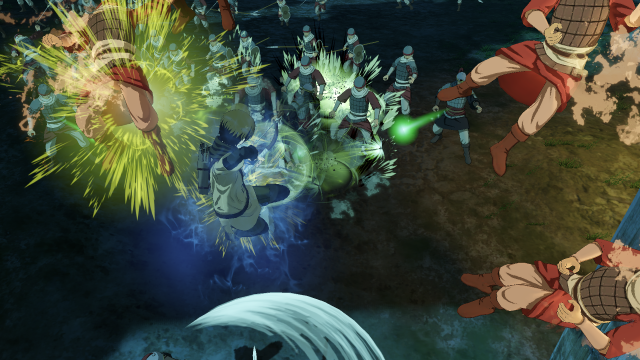 Elam’s less of a bowman and more of a tactical strike bomber.

As you progress through the story mode, it unlocks the equivalent missions in ‘free mode’. Here, you can replay maps with (eventually) any of the game’s playable characters, and unlock a few extra levels that touch on events the main story didn’t show. This is the only place you’ll get to use the main antagonist in battle, and it serves as an out-of-story way to further level up characters and weapons (which gain various elemental attacks through frequent use), or to grind for more cards. Unless you’re preparing for a run at Extreme difficulty, however, there’s no pressing need to actually do this. Mostly you’d just be grinding for the love of the grind itself.

Like many of the Warriors games, Arslan also has both local (split-screen) and online co-op play. Note though that I’ve been unable to test the latter directly because I’ve been reviewing this game pre-release.

The simplicity around many of Arslan: The Warriors of Legend’s features (fewer characters, far fewer weapons, easier difficulty in a series already known for being pretty straightforward on Normal, and so on) gives the impression that this is being pitched at people as their first Musou title. It faithfully follows the first season narrative from the anime, re-creating important battles in Warriors style along the way, but doesn’t go out of its way to impress much beyond that. Dragon Quest Heroes did far more with its combined licenses, taking the strengths of both to create something a little bit different; and for those who want a mainstream Dynasty Warriors title on PC, 8:XL (even though it’s a worse port than Arslan in some respects) is probably still the best one to pick up.