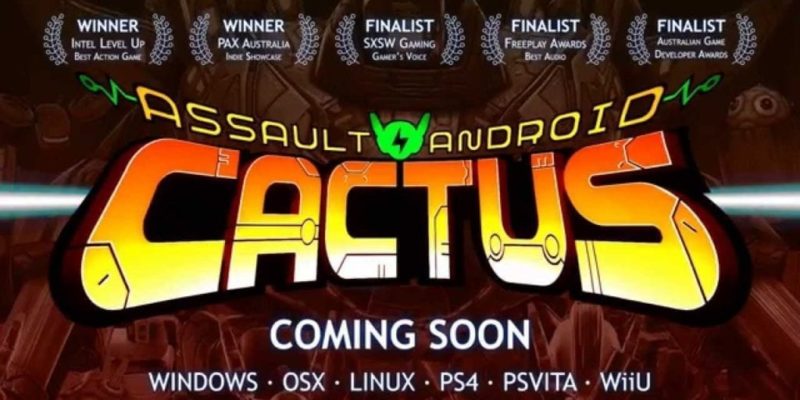 Video games are outlets for levels of satisfaction. Contentment in knowing that a game is now complete and overcoming the many experiences held within its storyline is something to be admired. Other enjoyments can come from challenging gameplay and the fact that, even though your palms were sweatier than a gym sock, you made it out alive. Yes, you did it.

Some of the most tense moments can be found in the traditional shoot ’em up and twin-stick shooting games. These are where spacial awareness, quick reflexes, and strategy all come together to test your skills both new and old. The developers behind Assault Android Cactus draw from the many shooters to come before them, adding their own flavor to the genre.

Keep on the move or enemies will make friends with your personal space bubble.

Assault Android Cactus is a twin-stick, top-down shooter in its truest form. You are tasked with defeating enemies that have overrun a vast areas of a space fleet. The robots, who have turned on the Genki Star and its inhabitants, only have a swarm of bullets to answer to. So, who upholds the law on a tumultuous space frigate? Well, an elite squad of female android space cops, that’s who.

The first person we meed from the squad is Cactus. She takes the role of one of the well-rounded players, having steady fire from an assault rifle. Her special, which can be equipped without firing, is a flamethrower with some dense spray. Others, like Starch, have a laser beam that singes robots until combustion. Her special is a salvo of micro missiles, also fairly powerful when launched. While the game may seem fairly straight forward in the twin-shooter department, it seems as though a lot of the mechanics, weapons, and gameplay were put forth with purpose. There is a lot of strategy.

One of the main points of strategy for the game is the simple task of managing space. No, slumlords need not apply. The game requires you to manage the enemies within a given space, and ensure that you have enough area of mobility to survive. Some levels are restricted with choke points lining the outskirts of the map. Others, like in Zone 4-Repeater, have a continuously changing floor pattern, leaving the odds to randomness. The design is both impressive and challenging.

Chains offer some bonuses only if they are executed with precision.

The intensity of your fire increases as enemies are defeated and the little white orbs they drop are collected. The little orbs increase your power, but this isn’t the only thing you have to maintain. Once you are struck by enough force to knock you down, you must gain these orbs back again along with your fire power. Your battery life is constantly monitored, and at times, is one of the most frustrating points in the game.

Usually, twin-stick shooters often rely on your survivability. The mad dashes and incremental moves to avoid heavy fire are what make the game. Boss battles are usually intense, usually making it out by the skin of your teeth. But, in the case of Assault Android Cactus, your wits are tested, being that the avoidance of all these things are still necessary, but the monitoring of your constantly reducing battery life must also be watched.

On many occasions, though, the timing for battery power-up drops doesn’t meet the demands of the game. Even after blasting through waves-upon-waves of robots, dodging fire, and making it to the last bar of health during a boss battle, the inability to pick up a battery will make you power down and start all over again. Battery drops are for the most part sporadic. However, when large bosses take a cut in their power bar, or larger enemies are defeated and a power drop will usually be close by.

No battery? At least you can go out while staring at the lovely blue lights.

In many cases, I’ve gone through levels pretty much clearing everything with precision. Enemies are sprayed with bullet fire, and power-ups are picked up with strategy. But, in the end, batteries were no where to be seen and my efforts were wasted. It does seem like a minor detail in need of small tweaking. This is especially dwarfed when you notice things like the first-person mode found in the purchasable options, or the small list of other unique filters you can add to your game. Simply having these extras done by a small development shows high attention to detail. Which, if you flip on the FPS mode, you can really get a close look at each enemy for proof.

Assault Android Cactus nestles its way into the twin-stick shooter genre, boasting challenging gameplay, swarms of bullets, and an array of weapon types. Enemies come in varied forms and drive a sense of uniqueness within each level and boss battle. Some weapons, like the ‘Helo’ that Aubergine has equipped, might take some high-level mastering or even co-op support in order to use it effectively.

It does feel very polished even in its Early Access phase. However, tweaks to the battery drop could ease many frustrations with gameplay, particularly not having to do an entire level over again because of one missed pickup. However, if this mechanic was put into place just to drive challenge, or deliver a sense of frustration, it would be some kind of sick joke.

Let’s just hope that is indeed not the case.

Disclaimer: Steam Early Access titles are games that are currently enrolled in the development process. While it wouldn’t be fair to give the game a complete score, we will do our best to offer a current critique for the current build at this time