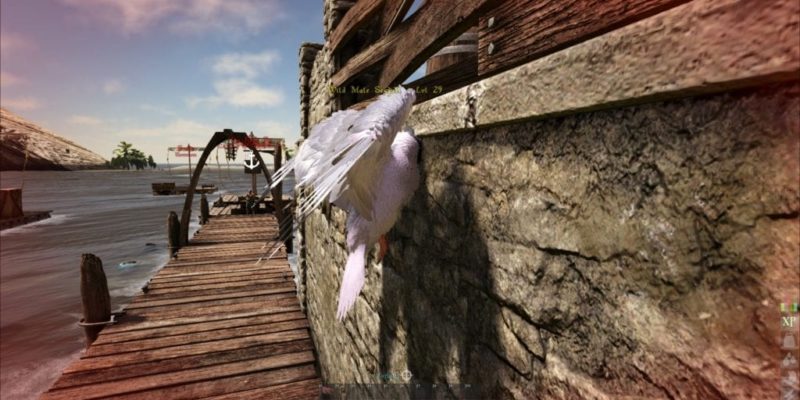 Atlas has been a big topic in gaming news lately, and for good reason. Its surprise announcement at The Game Awards from a controversial developer, and subsequently delayed launch were all big stories in December. My suspicions turned out to be true, since the game suffered a disastrous Early Access launch that was plagued with technical problems. But I recently I decided to jump in and give it a shot myself to see how well the game recovered since then. Even though I fully expected to encounter issues, I was still disappointed with what I found.

“Atlas.exe Has Walked The Plank”

Game instability is by far my biggest issue with Atlas. I would say that I experienced a crash almost every hour. Normally, this would easy to forgive for an Early Access game.  However, the always online, cutthroat survival elements of Atlas makes every crash absolutely heartbreaking.

All of my crashes occurred while I was out at sea on my little raft. As a veteran of EverQuest, I was instantly taken back to memories of drowning in Timorous Deep after losing internet. I wasn’t sure what would happen after logging back in. I hoped that my character would be returned to the relative safety of my raft.

Nope. When I logged back in, I was greeted by the respawn screen.  When you crash or otherwise disconnect in Atlas while at sea, you are instantly killed. This happened with all of my crashes. Each time, the fate of my raft was uncertain. Sometimes it would be waiting for me back at Freeport or it would disappear entirely.

There are no words to describe how utterly crushing it is to lose all your progress because of game crashes. This is only especially bad in Freeport areas, due to the fact that your body instantly despawns in these hub areas, and you lose all your stuff in the process. You’re able to retrieve your stuff from your body later in the game, but not in the starting areas, which makes for a brutal beginner experience. Grapeshot needs to implement a solution to this as soon as possible. Even a three minute long grace period before your character is killed would do wonders. 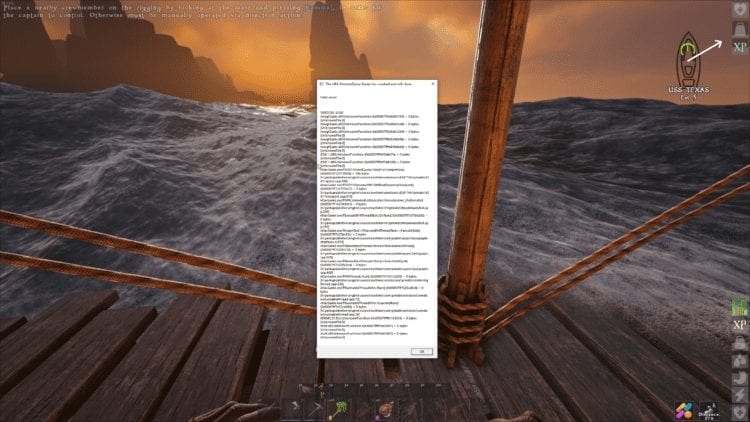 Nothing shivers my timbers like losing an hour of progress…

The Servers Are Not Watertight

The Atlas servers seem to have an issue keeping up, even outside of peak hours. I experienced a plethora of micro-stutters and rubber-banding as soon as I left the starting area. This issue seemed to be at it’s worst while I was sailing the seas. This makes me wonder how naval combat against other players holds up. If I’m experiencing lag while alone on a raft, I cannot imagine how poorly the game handles multiple large ships and dozens of players.

Stranger In A Strange Land

I’ll just say it plainly: respawning outside of Freeport areas is completely broken. My first spawn placed me in the middle of the ocean with nothing but the clothes on my back. I swam for a bit, but the nearest landmass was probably a half hour swim away. So, I opted to drown myself and try again.

After embracing the darkness of Davy Jones’ Locker, I was ready for my new lease on life. However, the cruel gods of Atlas had other plans. My character was transported to some ethereal plane, purgatory perhaps? I could see the Moon and the heavens above, but the space below me was composed purely of fog. I could not move, but I could still communicate with my fellow pirates. After I explained my strange situation, my peers told me “That just happens sometimes. You’ll die soon.” 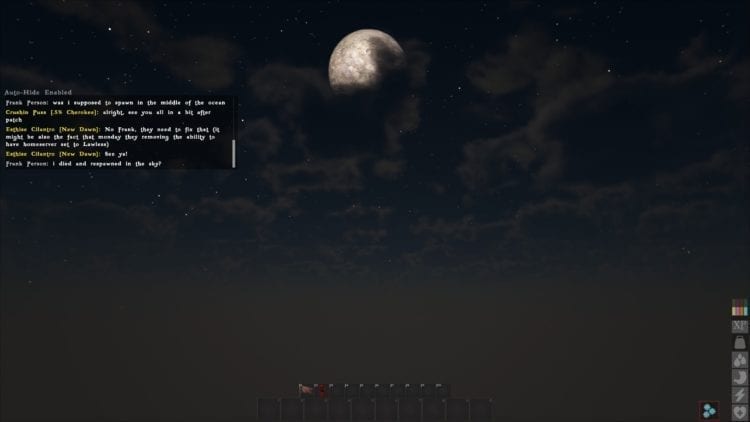 I’m not sure what I did to deserve this…

They were correct, and I once again welcomed the cold embrace of death. Selecting a new home server largely fixed this issue, but I still got a couple of strange spawn locations. In fact, my most recent respawn placed me on the side of a precariously high cliff, with nowhere to go but down…

If you’re a visual person who likes clear instructions, Atlas is not for you. The game does have a text-based tutorial, but it does not hang around. The beginning instructions disappear from the screen quickly with no input from the player, so be sure to pay attention!

As mentioned earlier, my first moments in Atlas were spent either drowning or on a different plane of existence. This meant the tutorial was long gone by the time I finally arrived where I was supposed to be. I looked for some way to replay the tutorial but never found one. Luckily I was able to ask for some direction from my fellow players, but it would have been nice to be able to consult an in-game resource.

While Atlas is a sandbox, I believe the new player experience right now is very sparse. Even after hours of playing, I was never sure what I’m supposed to be doing. Some quests for beginners would go a long way in teaching new players what Atlas expects from them.

I didn’t run into any blatant cheating or griefing during my short time with Atlas. However, plenty of users across the internet have highlighted several exploits. These include the ability to sink other players ships on PvE servers, where it’s supposed to be impossible. I’m not going to link to any of these exploits, but they’re out there. As of the writing of this article, Grapeshot Games has not even acknowledged the existence of these exploits, even though it’s been widely published on the internet since late December.

Is There Any Hope?

To the credit of Grapeshot Games, they have been hastily pushing patches since launch. There’s clearly a lot of work to be done, but the game is in early access so we can’t expect it to be excellent from the very start.

Despite all the issues I encountered, I think Atlas does have a chance to become something special. With the massive map, the game could be like EVE Online, where huge guilds massive alliances and race each other to claim as much territory as possible. The crafting also seems like it could become an interesting point of focus. In my short time with the game, I saw several impressive player-made structures, including a huge bridge that linked two islands together. I also have to admit that setting sail for the first time is pretty awesome. Bigger, more advanced ships can only make the experience better.

Unfortunately, I still have to advise most people to hold off on Atlas and wait for some more development progress. The unforgiving progression, lack of stability, and exploitable bugs will drive away all but the most dedicated sailors. The game is getting better, but it’s a slow process, so I see no point in rushing in.