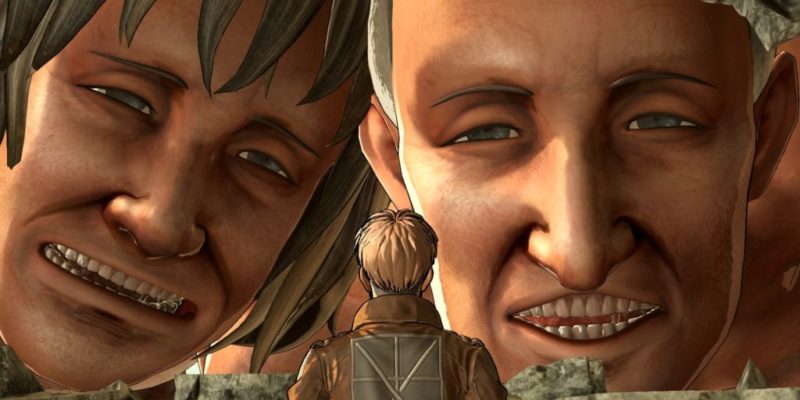 While playing through Attack on Titan: Wings of Freedom, the one nagging thought that kept appearing in my brain was “This feels a lot like Dynasty Warriors.”

It’s not, obviously. In a lot of ways it’s actually the opposite of Dynasty Warriors. Whereas that ludicrously elongated series has you bashing thirty people to death at once with an improbably sized weapon, Attack on Titan has you zipping about the battlefield, trying to line up a killshot on one of the gargantuan Titans. Nonetheless, this is Koei Tecmo, and there are an awful lot of comparisons to be made.

Attack on Titan: Wings of Freedom follows the first anime season of the rather popular manga/anime series Attack on Titan (with a quick dip into the OVAs and an Epilogue that pinches some stuff that has yet to be animated) which is sort of like Neon Genesis Evangelion only with giant freaky humanoid abominations instead of giant robots. It’s all about hope, death, trauma, failure, and discovering that for every one step forward you need to take several giant leaps backward. Cheery stuff. 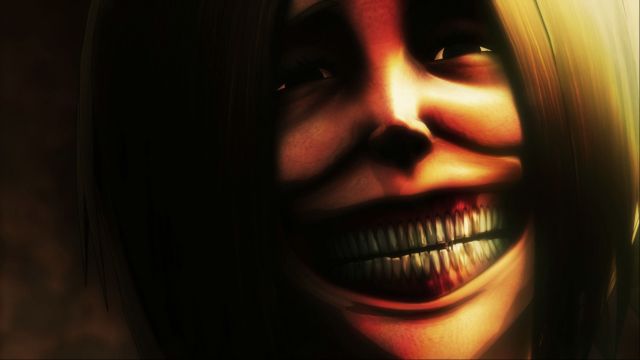 This cutscene is about as dark and creepy as the game gets. From here on out, it’s all action.

It’s set in a world with a mishmash of technological culture (which is something that, yes, is eventually explored in the storyline). All known humanity is corralled within three utterly gargantuan walls, which keep them safe from the Titans – gigantic, naked, genitalia-less monsters that seemingly exist for the sole purpose of devouring humans, and that’s done for fun rather than for food. Titans regenerate endlessly and have only one weak point: slicing out the nape of their neck.

There are muskets and cannons and castles, which is So Far, So 18th/19th Century. Then there’s the Manoeuvre Gear, which is a waist-mounted unit that launches grappling hooks and zip wires, and allows a skilled user to swing from buildings, trees, and anything else with sufficient height in order to move about quickly and gain a height advantage over the twenty-meter foes, and is decades (if not centuries) ahead of anything we’ve got.

To restate what I said above: in Attack on Titan: Wings of Freedom you get to use one of these to zip about the battlefield, trying to line up a killshot on one of the gargantuan Titans. And good grief, but it’s fun to do. 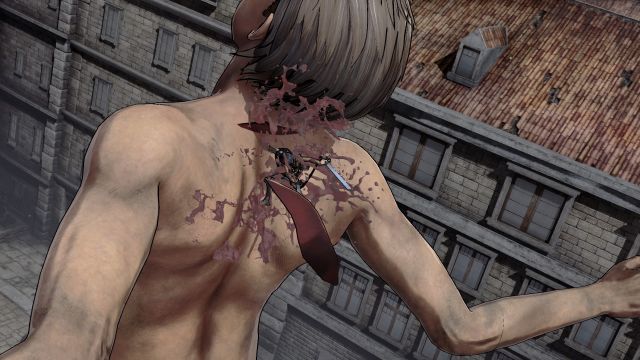 My one weakness: things penetrating my skin and damaging vital parts of my internal systems. How did they know?

The swinging neatly balances between being overcomplicated and requiring years of actual training to use, and ridiculously easy with your hooks latching onto the skybox. While your hooks are aimed automatically, you’re still reliant on (some) laws of physics: if you’re sailing high above the buildings and you latch onto something below you, that’s not going to get you extra height. If you latch onto something far away, you’ll probably swing downwards a bit before you start to retract and gain speed. Etc. For the most part you don’t need to think about it, but recognising how the game works out what to latch onto and how that’ll impact your movement does add a smug feeling of mastery to things, while still being so simple that you’ll pick up the basics quickly enough to start having fun.

The other component is the killing of Titans, which – again – manages a nice little balance between skill and mastery. The simple version is that you lock onto a body part (one of the legs, one of the arms, or the nape), launch a hook at it, and then hack it off. But the damage you inflict depends on direction and speed, and if the Titan turns around then you’re probably going to slam into its face rather than hack out its neck. So, yes, some care and attention is required when taking on the bigger Titans, although getting caught mostly means mashing a button to break free (and then not getting caught again before healing, or you die). 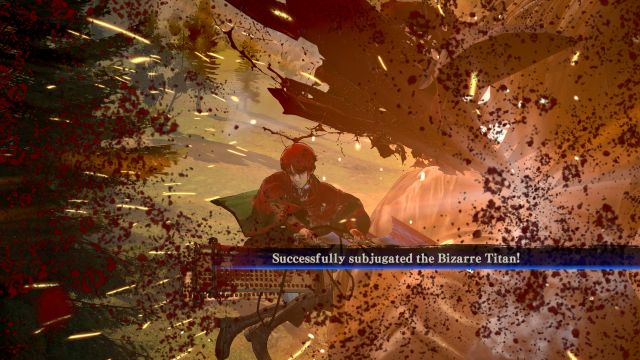 This is where the Dynasty Warriors comparisons start to come into play. While you’re a sole soldier (about eight are selectable for the non-story Expedition missions, while the story switches you between three or four depending on the demands of the mission) you’re not the only person on the wide-open battlefields. Other units are engaging Titans. Side-quests pop up as you proceed; assisting this group might result in you getting some cannons to use, while this one might add a decent soldier to your squad. All the while you need to be getting on with your main objective, taking down any Titans in your path, and hopefully ensuring that not every single other soldier dies.

Each of the characters have their own abilities. Levi is predictably overpowered, able to slash off a limb with a single swing, and after levelling up a bit he somehow manages to chain this stuff together into a chain of attacks that render a Titan into a limbless torso in one swift combo. Armin, on the other hand, is crap at fighting… but his high leadership means that soldiers in his squad attack more often, do increased damage, and he can even choose when they attack by tapping a button, which mitigates an awful lot of his uselessness. 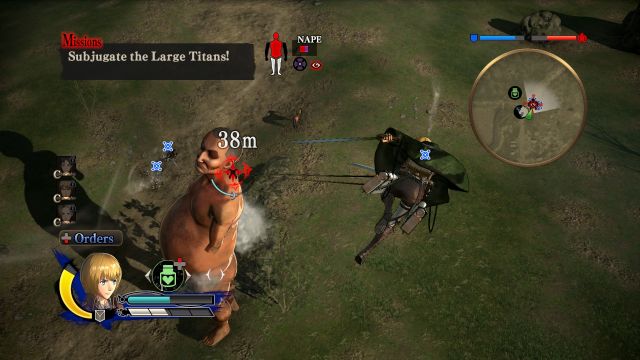 You need to pay attention to blade durability, how much gas you have left, and the strength of any hooks you have attached to Titans… although it’s really not as complicated as it sounds.

The problem is that I’ve basically just described the entire game, and once you get the hang of taking on the Titans, not even the Hard difficulty is going to prove to be much of a challenge. You swing at the nape if you see an opening. If not, hack off a leg, switch target to the nape, and then hook yourself in. Repeat.

While Attack on Titan (the series) focused on the hopelessness of humanity’s situation, with the absolute best soldiers barely managing to kill 30 Titans across their careers, Attack on Titan (the game) has you inflicting that amount of casualties in a single mission. Which is fine! It’s a game, and it’s about the swooping and the slashing rather than the psychological trauma. Less fine is that – barring occasional bosses – there are basically only a handful of Titan types across the game, and while there are about a hundred different possible appearances for them, they all handle in basically exactly the same way. There’s not much challenge and there’s a lot of repetition. 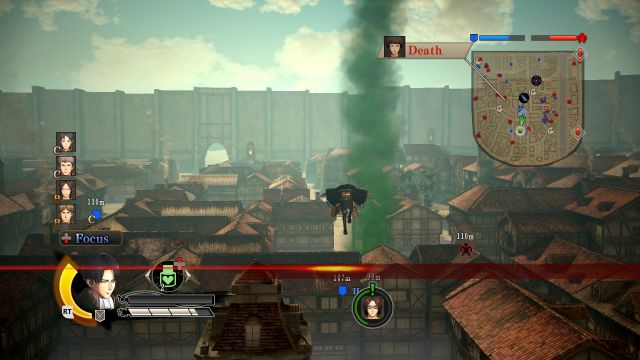 Manage to get up high, and you get a really nice view – although you’ll likely wish there was an option for a greater draw distance, as enemies and trees tend to pop in a lot closer than you’d like.

There are side-quests, yes; there’s equipment to upgrade, and characters to unlock, and levels to gain. There’s a wealth of content, and a bunch of post-game Epilogue missions to slowly unlock by grinding through side missions. It’s just that it’s all very shallow and it’s all done by swooping around and hacking at a Titan’s neck until it falls over, and then repeating about 30 more times for that mission, and then doing it again, and again, and again. Like I said: it’s a little bit Dynasty Warriors, only with big single enemies rather than groups of small ones. (And no Musou attacks.)

And yet, much like Dynasty Warriors, it’s still really good fun. The swinging mechanics are great. Cutting Titans to pieces is great. Bounding through a town and cutting down three Titans without touching the ground, while their toppling corpses crush the nearby buildings? Great. Repetitive, but great. 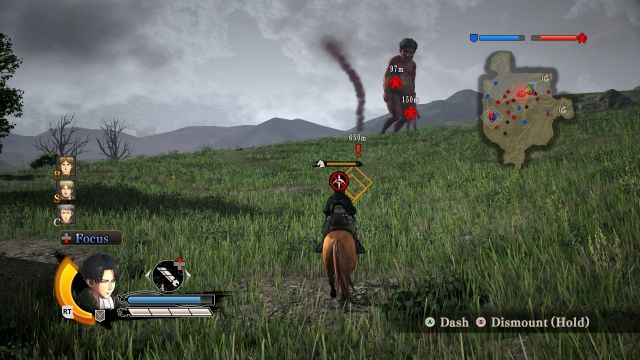 Plains don’t let you make good use of your Manoeuvre Gear due to the lack of trees and buildings, but you can still latch onto Titans, and you’ve got a horse for faster movement.

Nonetheless, if I’m going to recommend Attack on Titan: Wings of Freedom, I’m going to do it grudgingly and with a bunch of caveats. For starters, the PC version is nothing special: you’ve got 60FPS and 1080p, but you’re going to need a gamepad (and possibly a specific type of gamepad if the common complaints are anything to go by), it’s not much of a looker, and it appears to require a bit more grunt than you might expect. Secondly, the £49.99 asking price is borderline lunacy; at about £30 I’d have a much easier time recommending something as shallow as this.

On the other hand, if all you’re after is a game that lets you pretend to be Eren and Mikasa or Erwin, and you want to swing about a forest or a town felling Titans… well, this is unlikely to disappoint, because while that’s all it does, that’s also what it does really, really well. I bought it, I’ve played it, and I keep going back to it even though I’m bitching about its numerous issues, so that might help as more of a metric than any number can.