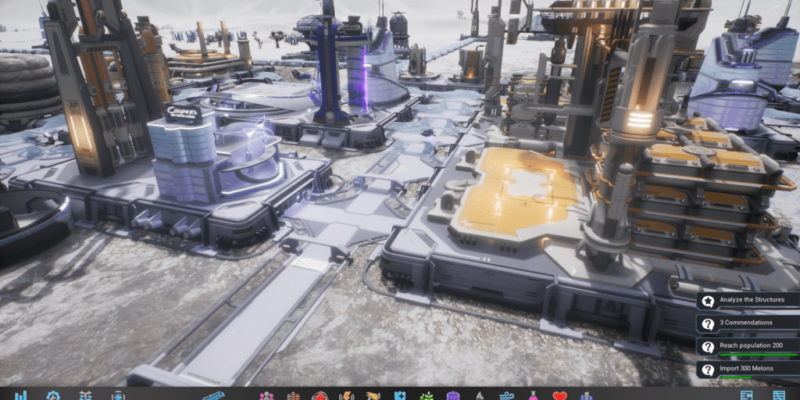 If you’ve played the later Tropico titles where El Presidente develops a space program, then it could be tempting to see Mothership’s Aven Colony as a kind of natural spin-off. The managerial tone is a lot more competent (save for the one guy who accidentally sends a picture of his arse around the colony during an early mission), but this new settlement builder is definitely familiar with the systems in what was most recently Haemimont’s series.

It shares the same sense of scale with those games, or with something like Banished, with which it also shares the theme of survival in hostile territory. You won’t be overseeing thousands of occupants in Aven Colony; most scenario missions will end with your population in the 300-500 range. Maps, once beyond the early missions, do have plenty of room for sprawl. But unless you’re specifically wanting to do that (there’s a sandbox mode for this purpose too), you’ll find that keeping things tight and focused gets missions done. 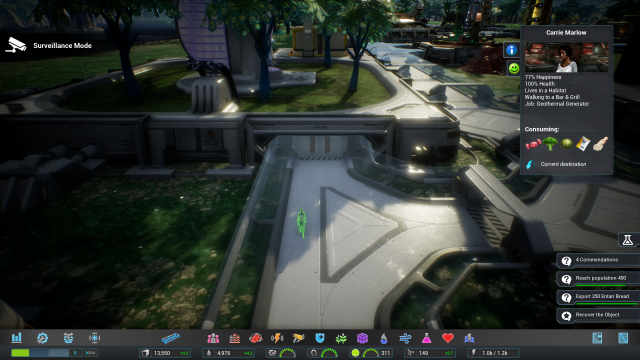 Like Tropico, you can also kind of spy on people.

Like other games of this type, Aven Colony demands that you spin several strategic plates at once. Building placement is important, not because of any supply line issues (unlike Tropico there’s none of this), but for reasons of manpower and morale. Colonists travel around through sealed tubes and they don’t like having to walk far to work; nor do they appreciate having to travel through other buildings. Some structures, though, are just automated, so they can be pushed out to the wilds.

Environmental threats and food production are also things to consider when plotting your colony’s layout. Lightning storms and ice shards can cause damage to buildings (but are protected by lighting towers and plasma batteries respectively), while other threats like spores and toxic gas can mess up your plans. All of the defensive measures have a limited range, so keeping everything covered takes some investment.

As mentioned, there are no supply lines to worry about. Construction is handled by flying drones, and resources are automatically drawn from storage when needed (you could charitably say this stuff is transported by drones too, it’s just not really shown). Economic production chains, however, are as vital as ever. 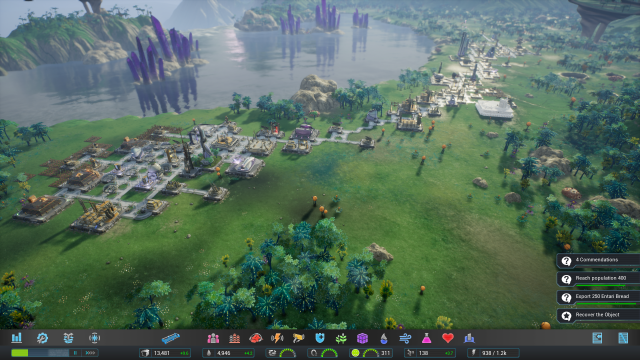 Not pictured in this prosperous lakeside scene: deadly floating spores.

An example: the nearby ground is unsuitable for traditional Earth crop supplies (corn, rice, quinoa for your foodies), so you need to get bold with some alien recipes. You can switch your farm or greenhouse production over to alien flora, no problem. But now you need a Tech Center to research the recipes (and check that they don’t kill humans, presumably), and either a Chemical Plant or a Mill to start churning out intergalactic oatmeal or grotesque alien pies. All of those extra structures will take up space, demand power, reduce air quality, cost Nanites (Aven Colony’s manufactured revenue), and require a workforce.

The annual arrival of winter brings regular troubles, too. Solar panels start to fail, and previously fertile ground will ice over for the season. You’ll quickly figure out, though, that simply switching to geothermal energy and greenhouse production can solve the winter problem entirely.

All of those factors are your plates, and failure to keep one set spinning can send the colony into a debilitating spiral. You can just about get away with being reactive to problems, but forward, strategic planning is a requirement on harder difficulty levels (just to drive home that point, Aven Colony tops out at ‘insane’). To that end, the game provides a set of useful overlays and stats. These aren’t always quite as clear as I’d like (the visual bar between air quality being at 80% and fine, or 70% and maybe-not-so-fine can be hard to parse, for example), but in general do provide the information diligent players will be looking for. 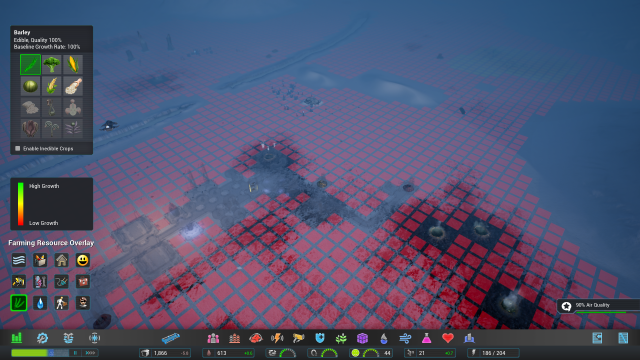 Right, I won’t be growing any barley here then.

In a further echo of Tropico, Aven Colony dabbles a little in politics. At the 100 population mark, colonists start holding regular referenda on your competency in office. Lose the vote, and you’re out. It’s not possible to engage in El Presidente style ballot stuffing, but you could, say, start handing out alien candy bars with morale boosting effects (and long-term damage to health) or throw open the doors to your VR gaming saloons for free. Colony policies can also be used to give yourself a bit of breathing room through water or power rationing. Those won’t win you any friends, but they can stave off imminent disaster.

Once the settlement can support it, it’s possible to build an Expedition structure. This opens up a whole new mechanic for sending your Thunderbird 2 style craft off on ‘away missions’ to secure lost supplies or tackle Dune-like sandworms. Before you get too excited, this sort of thing only happens in text, with a post-mission report informing you of success or failure. It’s largely another way to boost resources, a Nanite research sink (better shields for the ship, and so on), or an outlet to drag out campaign objectives a bit beyond their welcome. However, it can also eradicate things like spore nests and reduce the frequency of their attacks.

Aven Colony’s nine scenario missions make good use of their planetary environments to present differing challenges. You may find yourself in a position where barely any food will grow, and so have to survive on trading away materials in exchange for ration packs; constructing the colony accordingly. Each of the two-ish hour missions (depending on how well things go and how often you employ the x8 speed button) advances the game’s background plot, and, more importantly, tests the player’s mastery of its systems.

That mastery comes a little quicker than I would have liked; once you’re a few missions in, a seasoned player of these types of game will have spotted which buildings are near-vital and which can be somewhat ignored (save for very specific objectives). 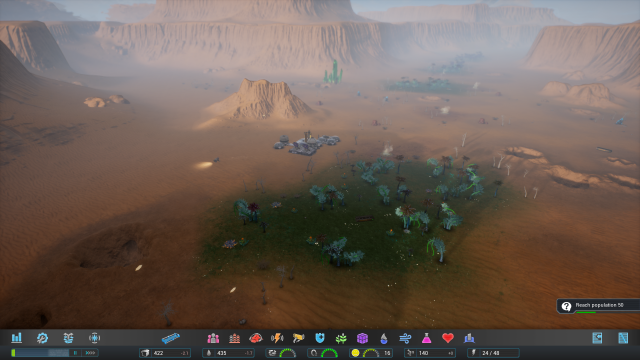 Here’s an idea of the map scale: it extends the same distance ‘behind’ the camera too.

All of those same nine maps become available for sandbox play once the first couple of scenarios have been finished. In sandbox, you can change parameters like density of mineral deposits, starting colonist morale, frequency of environmental events (if any), in order to tweak the starting conditions to your preference. Campaign missions also let you continue playing after the objective victory if you wish.

Aven Colony draws on familiar city building systems to create another title about meeting the material and socio-economic needs of an expanding population. Achieving that end requires the successful juggling of finances, space, and multi-faceted production chains. The art of balancing settlement expansion with equilibrium is as compelling as ever, and Aven Colony is a reliable way for an afternoon to disappear into the cosmos. Its thematic focus is dryer than Tropico, and there aren’t as many varied ways to maintain a flourishing colony as that game (outside of a couple of unique missions the ‘pattern’ remains fairly static here), but Aven Colony has enough substance to establish itself as a industrious arrival on the shores of the settlement building genre.

A faithful genre piece, Aven Colony takes the socio-economic juggling of settlement building games like Tropico and Banished, transports it to space, and establishes a pretty successful outpost.

By Steven Wong22 hours ago
Reviews

By Blake Grundman23 hours ago
Reviews