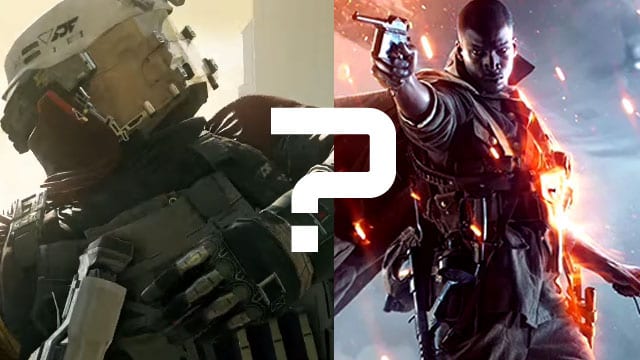 It happens every year, EA and Activision attempt to outdo each other with the latest installments in the Call of Duty and Battlefield franchises. This year is no exception.

This was the week that both publishers decided to unleash their latest creations on shooter fans and this time the games are at opposite ends of the shooter spectrum.

With Call of Duty: Infinite Warfare Activision has gone for the futuristic vibe with some space stuff thrown in which has the CoD community a little divided, so much so it prompted a comment on their financial call yesterday.from the guys up top that they were not concerned about the Youtube downvotes the trailer has received.

DICE on the other hands have gone back in time to WWI with Battlefield 1, and although there was some speculation that it would be an “alternative” WWI, that doesn’t appear to be the case.

For once the two titles are quite different which could mean gamers will buy both or prefer one over the other. The futuristic FPS has been done to death so perhaps DICE and EA has got it right this year. The WWI setting could be a really gritty experience as the trailer showed with its horses, WWI tanks and trenches, but a lot depends on how DICE presents the horrific conflict.

Assuming you could only pick one, what would it be? The WWI shooter or the futuristic shooter. Let us know in the poll below.

NVIDIA Delivers the ‘Goods’ with GTX 1080

By Ben Simmons22 hours ago
News