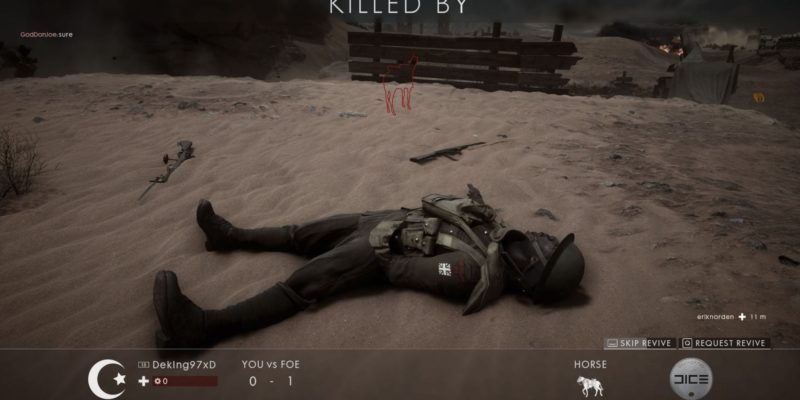 A horse! A damn horse!

DICE have given the order to release the Winter Update for Battlefield 1, raising the Class Rank cap from 10 to 50, adding fancy ribbons, and making all manner of other changes. The full list of bug fixes and alterations can be read in the patch notes, below.

Those aforementioned ribbons are worth 300XP apiece, and are said to be awarded for “good teamplay” and “playing the objective”. There are twenty in total, for now.

Eight of the game’s primary weapons will now have an unlockable Elite Codex, based on 500 more kills per applicable weapon. As well as the Elite Codex itself, you’ll also get 25,000XP. In addition, the rent-a-server system has gained some new features: “RSP admins will now be able to kick players from their server using the in-game UI, or swing a mighty ban hammer if someone is misbehaving.”

Fixed some parts of vehicles that were improperly placed in front of 1p cameras when taking or repairing damage to them.

Fixed tank driver weapon visuals not functioning correctly for other players when the driver uses a 3p camera.

Fixed an issue where the Heavy Tank would not show on the minimap when firing.

Reduced the cooldown of gas abilities on vehicles from 30-32s to 25 seconds to make up for reduced gas duration.

Fixed issue where multiple tanks could become available to a team when they shouldn’t be.

Fixed an issue where the Warbond symbol overlapped the amount of available warbonds in Arabic language.

Fixed an issue where the kill log would be visible in the deploy screen in Hardcore mode.

Fixed an issue where player nametag would not show in the kill log for some type of kills.

Improved the logic for fading out crosshairs and UI when aiming down sights.

Vehicle selection is now disabled while the preround countdown is running in order to provide a more fair selection process for vehicles.

Increased the time for re-selecting invalid deploy points from 3 to 10 seconds to avoid 100% automatic reselection when squad members are under fire.

Fixed issue where amount of warbonds could overlap UI container.

Fixed an issue where players would join an Operation when it had progressed too far, almost at the end.

Improved performance in the menu system.

Fixed a bug where the user remained in hang after failing to join a server.

Fixed a bug where the tracked medal was not highlighted.

Fixed a bug where players were unable to see the highlighted text in end of round.

Fixed a bug where players were prompted with “Matchmaking failed” when switching between Quickmatch modes.

Fixed a bug where the party hub did not update party members.

Fixed a bug where stats required reentering the weapons page to update.

Fixed a bug where players were unable to invite to party from comcenter after booting the title via party game invite with a 6+ people party.

Fixed a bug where personalized recommendation cards would not fade.

Fixed a bug where the context menu was misaligned when the user clicked on it for the first time.

Fixed a bug where the highlight was broken after the user selected a vehicle with service star in the vehicle tab.

Fixed a bug where players were left in hang when dismissing the “Matchmaking Failed” while the “you have no scraps” prompt was active in loading screen.

Fixed a bug where players could scroll using “R” in the comcenter on console.

Fixed a bug where the end of round countdown stopped when quickly navigating through the tabs.

Fixed a bug where the mouse scroll did not work in list of recommendation cards.

Fixed a bug where content moved around in the menu when players were spamming down on the d-pad.

Fixed a bug where players entered an unplayable state when attempting to join a game session via the Xbox friend’s tab.

Fixed a bug where it was not possible to inspect skins in the Inventory.

Fixed a bug where Standard Battlepack real-money price sometimes did not show up.

Fixed an issue with floating debris after destroying a table.

Fixed an issue where players could get stuck in a table.

Player will no longer clip through the visual mesh of windmill interiors.

Grenades and dynamite will no longer fall through the floor of the windmill balcony.

Fixed Conquest spawn locations on Suez. Moved one up so player no longer spawns underground, moved another out of a tree.

Fixed issue where underwater sounds could get stuck on land.

Fixed issue where the player could move on top of the map on Argonne Forest.

Fixed issue where Hint Line for train did not disappear after performing indicated action or even leaving the behemoth on Conquest, Suez.

Side gun meshes weren’t rendering for 3p spectators depending on which weapon was used and if that particular seat was spectated.

Fixed an issue with the “Tankghewehr 1918” Elite weapon replenished ammo after picking up any dropped weapon kit.

Fixed illogical behavior when using K Bullets with the Martini-Henry.

Increased horizontal recoil of Lewis Optical and M1909 Optical by 10% when ADS.

Upped recoil decrease of “Low Weight” SLRs from 6 to 7.

Increased damage of the Martini-Henry between 30 and 80 meters slightly.

Reduced the damage of impact grenades from 80 to 72″

Tweaked the damage behavior of the 12 g Automatic shotgun to balance all variants better against each other:

Fixed Selbstlader 1906 and GasserM1870 last round fired animations for accuracy.

Fixed issue with tiered reloading in the Mle 1903.

Corrected errors in moving dispersion for crouched hipfire on shotguns.

Automatico M1918 sometimes showed the wrong name (it was called Modello 1918 in a few places).

The Tankgewehr now resupplies 4 rounds at once.

Made damage of the Russian 1895 Trench and Horse drop slower to give them a slightly better 2 hit kill range.

Fixed an issue in Spectator where a 1P overlay appears for spectators viewing players in fortress guns in 3P or when spectating the artillery truck driver in 3P while the driver zooms.

New button added in Spectator mode to view the gamer card of a spectated player.

Added button labels to the view modes in Spectator mode for PS4/Xbox One.

Bayonet recharged sound could trigger from any soldier on spectator clients. This should now only occur for spectated soldiers.

Added extra check for “not team neutral” to gate announcer VO when in Spectator mode Freecam or Tabletop views.

Added extra checks for Low Health and Gas Supression SFX/mixers to start if spectator enters player view while SFX/mixers should be active.

Possession announcer VO will now not play for freecam and tabletop spectators.

Fixes Pre-EOR music not activating for spectators (all game-modes).

Gated “Lost Objective” VO to not play for spectators in Conquest/Operation/Domination.

Fixed corrupted VFX when players shoot the Flare Gun in all camera modes.

Fix for parts of the train disappearing while spectating a player in the train in 3rd person or director.

Fixed the Spectator boundaries to be the same as the plane boundaries on Giant’s Shadow.

Fixed a spectator bug with the behemoth icon staying at the center of the screen if you exit player view mode before it is moved to the final position at the top of the screen.

Fixed an issue where the option “show player outlines”/Squad Pin stopped working when switching through players.

Fixed an issue where the player could not select the numbered freecam they were just on from a drop camera.

Fixed a bug where Battlepacks and Medals were present in loading screen when joining as Spectator.

Fixed a bug where players did not receive the option to join friend as spectator on consoles from comcenter.

Improved cavalry victim experience. You should no longer get killed by cavalry using a saber from multiple meters away.

Fixed errors where Elite Kits had unintentionally high health regeneration delays and carried too many grenades.

Increased the threshold for suppression effects to prevent suppression from occurring too early.

Reduced gas duration from 22 to 15 seconds.

Fixed VO issue in Rush when defenders have interacted with telegraph to send enemies coordinates.

Path of Exile expansion The Fall of Oriath revealed

By Robert Workman28 mins ago
News

By Dillon Bantel58 mins ago
News