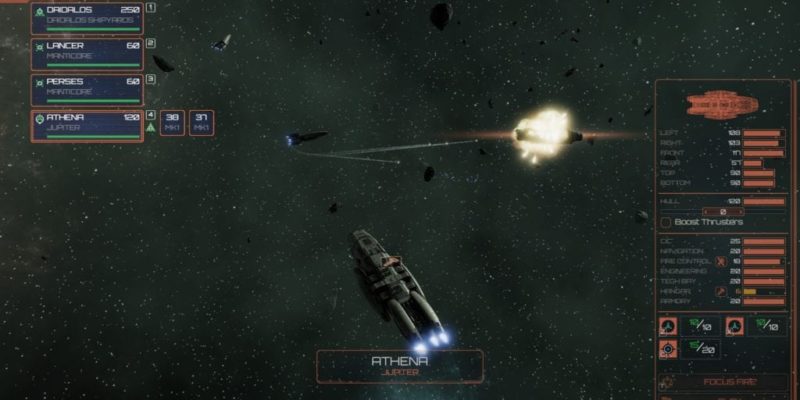 The ending to the revived (2004) Battlestar Galactica gets a lot of flak, but I remember the series starting to get a bit iffy as early as Season Three. If anything, the higher points of the fourth Season (the attempted mutiny among them) helped steady the course. Still not exactly sure how All Along The Watchtower ties everything together mind you.

Black Lab Games’ Battlestar Galactica Deadlock both does, and does not, take its cues from the 2004 version. It’s based on that interpretation of the series (rather than the 70s original), but it also takes place before the depicted events. Instead, Deadlock deals with the efforts of the twelve colonies in the First Cylon War.

You take the role of Executive Officer, serving under Admiral Lucinda Cain (yep – there’s an Agathon in there too). This is basically a narrative excuse to have the player be a (silent) character who controls the bulk of the fleet. 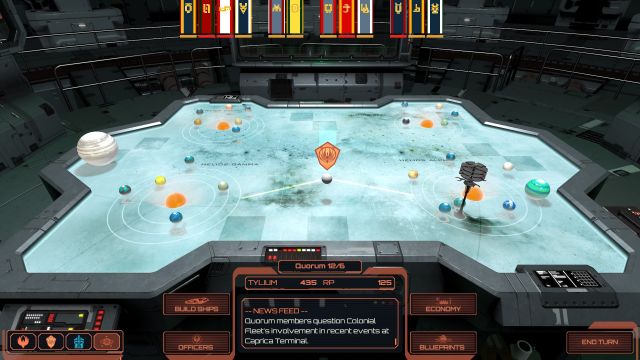 Here’s where the bigger picture planning of your campaign will take place.

Battlestar Galactica Deadlock is a tactical fleet command title at heart, with an extra strategic layer to test your skills of longer-term planning. It’s not out until 31 August (as announced earlier by Slitherine), so all of the details in this preview article are based on an early build of the game. The broad scope isn’t going to change in under a month, but individual aspects or feature mechanics may be slightly altered.

I’m only a few encounters into the game (around about Chapter Four of, I think, 12 or 13), but it looks like battles will be tight affairs based around accurate control of a small(ish) number of ships. The ‘points’ count for a one-off skirmish match (playable in single or multiplayer) tops out at 8,000 in this build, which is 16 Manticore corvettes or 10 Adamant Frigates. That’s likely to indicate the numerical extremities of the main campaign too. Early on, you’re in command of five or six vessels.

That’s absolutely fine, because you have a lot of control over each individual ship and conflicts between two sides with more than 12-15 could potentially get a bit drawn out. Battlestar Galactica Deadlock has a turn-based system of issuing orders, but those orders play out in a simultaneous segment of real time. If a Cylon craft looks like it may take evasive maneuvers to try to get out of your turret arcs, you need to be able to account for that when planning your next moves. 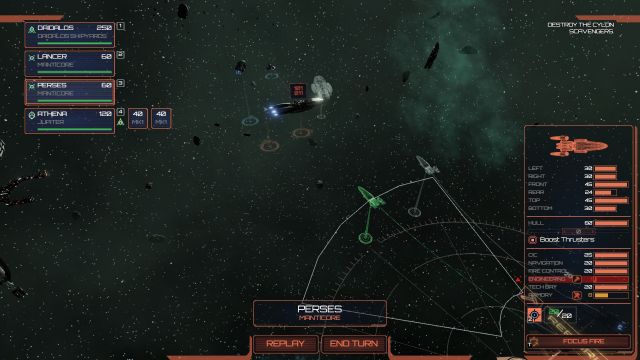 Here, my Manticores got lured away from the fight and need to boost to get back.

Battles take place in 3D space, so ‘up’ and ‘down’ (insofar as those exist in space) are also options when moving. So far, those have proved useful for avoiding collisions with my own ships. I’m the best at giving orders under pressure.

What you can command a particular vessel to do depends on its role. Broadly speaking though, your ships can be told to focus turret fire, boost power to the engines, deploy flak, launch guided missiles (these sorts of special munition actions have a cooldown), repair damage to defined areas, and launch Viper fighters (hurrah). Every ship also has an adjustable ‘posture,’ which can be pushed further towards attack or defense, resulting in increased damage (or armour) at the expense of the opposite. All of this gives you a pretty wide range of moment-to-moment tactical decisions to make for each of the ships under your command.

The Cylon craft in Battlestar Galactica Deadlock have their own tricks. Early on, their most persistent effort is hacking; which targets your internal systems and can play havoc with things like thrusters or the ability to aim turrets. I’ve not yet come across specific counter-measures to this tactic yet (besides just blowing up the offending assailant), but all indications suggest these will be introduced further into the campaign. 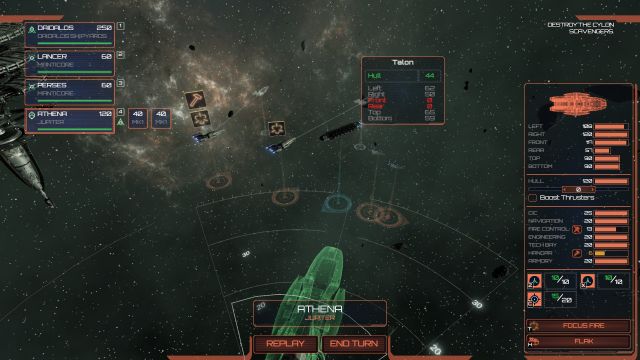 There’s a lot of information to process here, but it makes sense in motion.

All ships have locational damage, which means it’s necessary to chip away at the protective outer shell before you can reach the sweet, vulnerable hull beneath. This means Battlestar Galactica Deadlock trends towards the naval tactics of swinging into position at just the right moment to bring a series of turret or missile broadsides to bear on a previously exposed enemy flank. Likewise, it’s sensible to keep track of where your own craft have been damaged and attempt to always show your armoured sides to the Cylon enemy.

Losing a ship is bad news, because that’s a vessel you’ll need to replace with your scarce resources after the fight. I’m not yet far enough in for all of Battlestar Galactica Deadlock’s strategic campaign map layer to kick in, but it adds a whole additional set of tricky decisions to the game. As well as resources, building new ships takes time. You can rush the process, but it makes the vessels cost two or three times as much, so unless you’re absolutely desperate that seems like a poor choice. Its inclusion suggests there will be times when you are desperate.

You’ve also got to make sure you keep the colonies happy; and keeping them happy means keeping them safe. Distance jumps require the same resource as ship-building, and engaging in constant skirmishes is probably going to lose you a few craft too. But the colonies are the ones supplying you with resources in the first place, so if too many give up on you (or are lost) then the campaign looks like it will rapidly spiral towards XCOM-when-all-the-nations-hate-you levels of crisis. 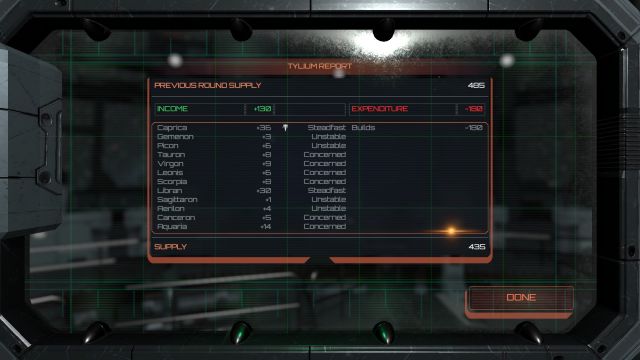 A few hours of play obviously isn’t enough for in-depth judgments of Battlestar Galactica Deadlock’s mechanics. Only a full play-through (or close to it) will reveal how well both the tactical combat choices and overarching strategy layers hold up over time. But I can say they make a reassuring first impression. On an aesthetic level too, Deadlock seems to be handling the license with care. Combat features DRADIS pings and authentic fleet banter, and the ship roster that Black Lab Games have fleshed out for the purposes of this title feel like (to this fairly casual fan’s eye) they fit within the established universe.

It’s taken a long time, with a few missteps across the years, but Battlestar Galactica may soon have a licensed game of which it can be proud.

By Ben Simmons4 days ago
Previews