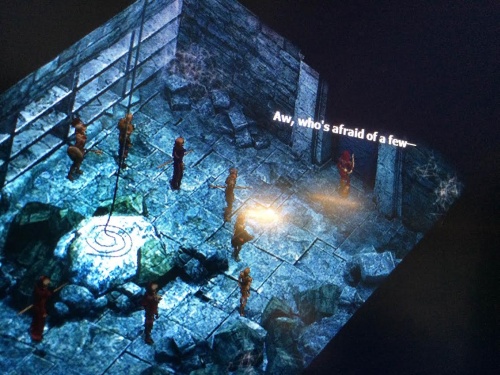 Beamdog, the company behind the ‘Enhanced Edition’ releases of Baldur’s Gate 1 and 2 are developing an RPG intended to bridge the gap between those games. This news comes by way of the Beamdog blog (and comes to me by way of RPGCodex, because it’s not like I was reading the Beamdog blog today.)

It’s also said to be a “bigger” release than anything Beamdog has done before. Further information will be divulged in late Spring (which I guess means … May or so?) In the mean time, you can look at some low quality photographs of some in-game images taken by someone with a phone and a shaky hand.

These images are described as being “mysterious leaked” by the Beamdog blog, which looks to me like an obvious half-truth.

In other Beamdog news, the company is ruling out a possible Baldur’s Gate III (at least for now) and says it is working on a second game with the codename “Project: Beartrap.” This one is described as existing and “a departure” from previous Beamdog work – so probably not an Infinity Engine RPG. Sharks are mentioned too.

Steam Machine presence planned for GDC, controller may feature too