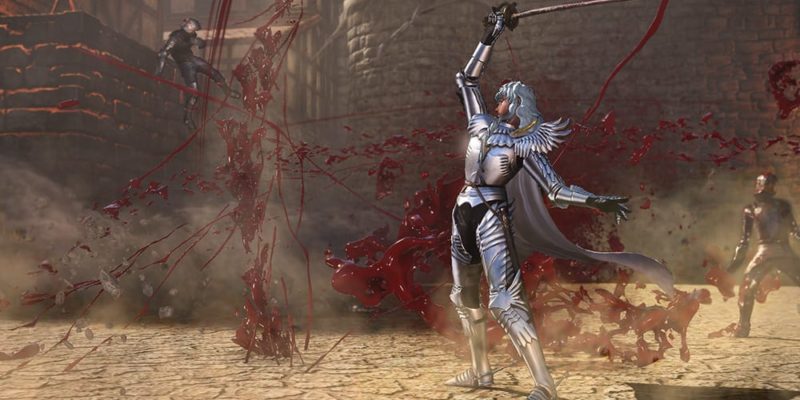 Koei Tecmo’s Berserk Musou title (it still doesn’t have an official name, oddly) will be released in the West this Autumn. That schedule is confirmed by the Koei Facebook page, putting the game somewhere around September-November.

The official site for the game now contains a few details (as well as new screenshots, shown below) about what period of Berserk it’ll be covering. Starting in the ‘Golden Age’ arc, you’ll also be joining Guts and company in the revenge-based ‘Hawk of the Millennium’ arc. The game will include footage from the trilogy of animated Berserk movies.

According to the site, “the action of cutting through hundreds of enemies, fundamental to the Warriors series, is fused together with the dark and gruesome atmosphere of the world of Berserk“. This means using Guts’ gigantic sword to cut people in half or send them flying with ‘smashing’ attacks. Not sure the game will get away with saying ‘oh you’re just knocking people out’ (in usual Warriors style) if we’re cutting them in half.

You’ll be able to play as “any of a number of characters from all the different parts of the story” (though only Guts and Griffith are listed on the character page so far), and it’s said that the movie trilogy voice cast (and new people from the new animated series) will be reprising their roles.

The Telltale Batman series gets a rough release date