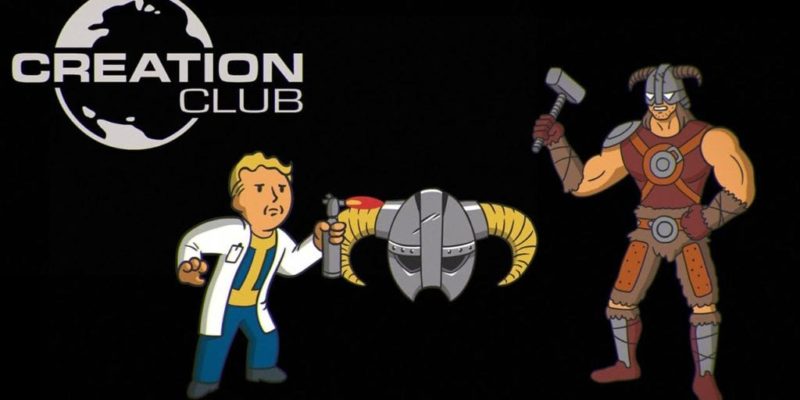 It was never going to be long before someone else had a crack at a paid modding system, and Bethesda are going for it with Creation Club. This has only just been announced with a minute long video, so don’t expect full details here, but it’s basically a mod platform where you use “credits” to download them.

Unlike Valve’s disastrous first attempt at this, the Creation Club does at least seem to be pretty heavily curated (so you shouldn’t have people trying to sell mods cobbled together from bits of other mods or copyrighted material and so on). On the other hand … paying for mods.

The material in Creation Club will be supplied by Bethesda themselves (so that’s basically DLC), “outside developers”, “the very best community creators”. For now it’ll be stuff for Fallout 4 and Skyrim Special Edition. Said curation and co-operation means all the mods will officially work with saved games, add-ons, and avoid conflicts. But for that privilege, you’re going to be paying.

That all important information – how much “credits” cost – isn’t yet known. I’m sure it’ll be entirely non-controversial though.

Update: There’s a Bethesda FAQ for all of this up here. It confirms that Credits can be purchased through Steam (it doesn’t give prices), and that creators have to submit documentation pitches to get through various alpha, beta, and release stages before anything appears on the Creation Club. Everything on there needs to be original, they say they won’t be allowing any “retrofitted” mods. Creators will be paid for their efforts, although it doesn’t give any percentage or indication of how much that might be.

Finally, it suggests this system is not “paid mods”. Although since it’s a platform for the hosting of curated mods, which will then be purchased by people, I’m not sure how much weight that explanation really has. Creation Club will launch this summer.

Dishonored: Death of the Outsider asking for one more big kill