Black Desert Online is an MMORPG already released in Russia and Korea but a North American and European version has been promised for release in early 2016. Daum Games have today released a new appropriately-named ‘Action’ trailer (below) showing off melee and ranged attacks on foot and mounted. You’ll also see a mount administer a convincing blow with its back legs. Nice. 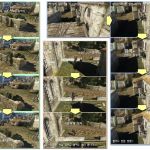 It’s been heralded by the developers as an open world MMO boasting next generation visuals and a skill-based combat system that will ‘rejuvente the genre’.  BDO will require precise manual aiming, combo attacks and dodging unlike tab-targeting favoured by older MMOs. Add to that the Parkour system that allows for a more fluid movement through terrain and built-up areas similar to that seen in Assassin’s Creed and combat becomes a whole lot more stimulating.

They are also boldly claiming that it has ‘the best character customization system of any game on the market’ which should press a button with MMO players, as long as gear is as varied too. No point being able to finely craft the features of your face, hair and body shape if when you’re suited and booted a more limited variation of outfits drastically reduces your uniquenss.

The western release will differ in many ways from the version already released in Russia and Korea, such as balancing, progression and the monetisation model (it’s free to play there).

“We are putting a lot of effort in the game’s Western localization,” said Daniel Loehr (AKA Belsazar), Project Manager at Daum Games, “We are localizing approximate 2.5 million words into English, German and French. Black Desert Online’s content and gameplay sytems will be adjusted to accommodate Western players and our differentiating business model.”

It’s due to be released early next near as a one off purchase however there will be the option to buy vanity and convenience items.

There’s also this recently released trailer that shows of some more specific areas such as character customisation, player housing building, lots of different mounts and crafting.

Finally a video from Paris Games Week showing off some nice locales and monsters.