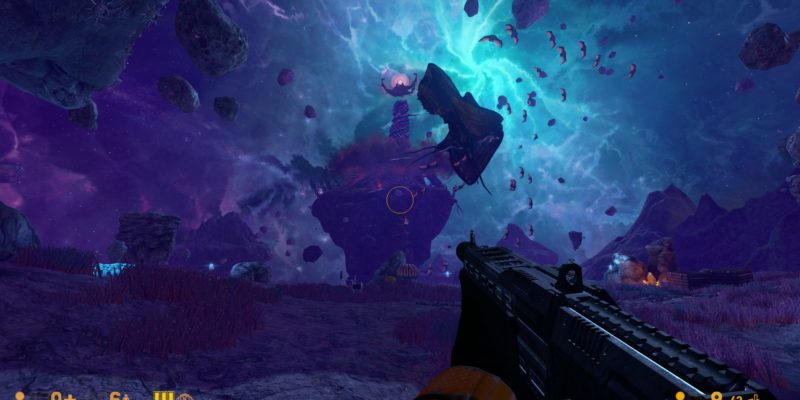 It’s hard to believe it’s been eight entire years since Black Mesa was first available to play. Sure, it wasn’t a complete remake of Half-Life at the time, but it was an impressive feat nonetheless. Another seven years and the Xen portions were done and, now, the entire shebang is finally entering 1.0. It’s been a long wait and I’m happy to say that it was worth it.

Black Mesa‘s story is still very much as anyone who’s played Half-Life will remember. You are Gordon Freeman, a bespectacled and voiceless scientist whose perspective you stay fixed to for the entire duration. The day begins at the Black Mesa research facility as Gordon takes part in an experiment that, naturally, has “unforeseen consequences.” Portals are opened and monsters come flooding into the place as Gordon moves around, fighting aliens and marines alike, in an attempt to make it out of this alive.

Half-Life was a marvel of storytelling when it first released 22 years ago and Black Mesa only improves upon it. There’s a much greater variety with regard to the NPCs. There’s more dialogue, more personality, and more detail all around. The game has an impressive sense of scale and the new visuals and sound effects go a long way towards making the narrative and events within it all the more effective. 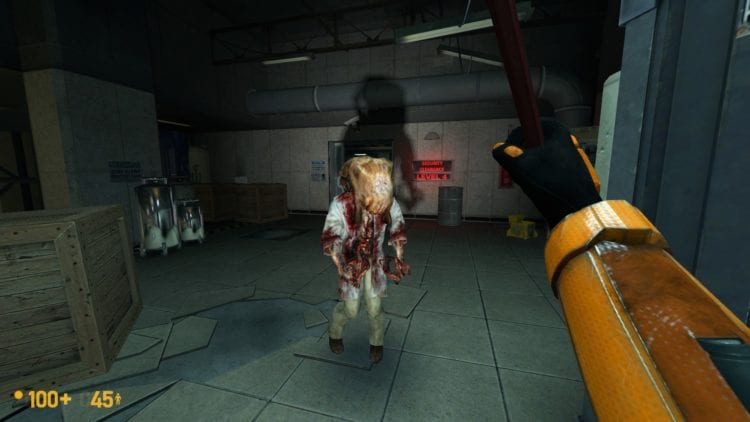 Black Mesa is built on the Source Engine and, as such, looks and feels an awful lot like Half-Life 2. Not that that’s a bad thing. Instead of just trying to make a 1:1 copy of the original game, many of the areas are re-imagined, so much so in some cases that it can be difficult to even recognize them. Looking at the rocky backdrops in Surface Tension in the original game and comparing it to the much larger, infinitely more believable vistas here truly makes for two very different experiences.

And in many instances, the level design is just different. Areas have been expanded or refocused in myriad ways. There are new things to find and new ways to go about progressing at times. And then there’s Xen. One interesting thing about the development of Black Mesa is that it exists due to Crowbar Collective’s reverence for the source material. Except for Xen. When it came time to remake that, the team echoed the general sentiment that the last part of the game just wasn’t up to snuff. So it did the only sensible thing: redesigning the entire thing from scratch.

To hammer it home, the original Xen chapter can easily be completed in just a few minutes. Here, it could take a couple of hours or more depending on how quickly you move through it. These new areas bear a passing resemblance to those in the original. But the layouts, geometry, and general sense of pacing are completely different. They still hit the same major story beats, but once you jump through that portal, Black Mesa becomes a new game. 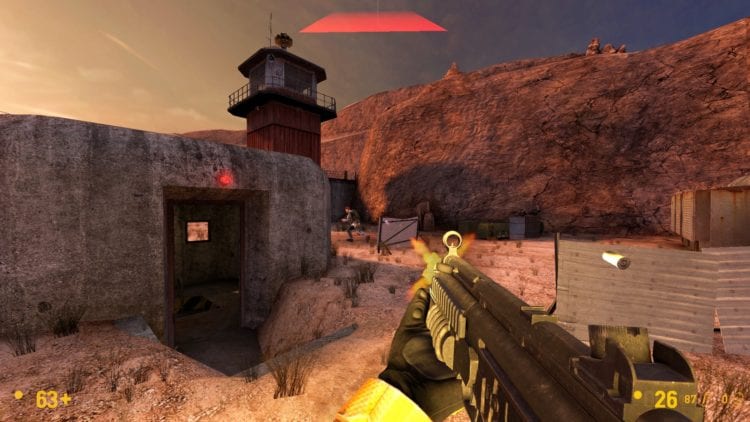 Since the majority of the game is still mostly Half-Life, it features some of the best level design that the FPS genre has to offer. The body of the game covers labs, waterways, industrial areas, waste disposal places, and the like. The level design and sense of flow are still some of the most memorable in any shooter. The newly designed Xen could have seriously taken things off the rails. Thankfully, the level design in these new areas is also extremely good.

Part of Crowbar Collective’s goal in making these sections their own was that it wanted them to feel more consistent with the rest of the experience. And it didn’t quite make it, regardless of how admirable their attempt is. The majority of chapters 15 through 17 are spent exploring, with very few epic combat encounters to break them up, leaving these levels to drag a bit.

It’s more than a little weird that the game’s focus changes so suddenly. Sure, there are instances of this exploratory focus in prior segments of the game, but none of them last for nearly as much time as they do here. However, there’s a certain kind of logic to it. The Nihilanth probably wasn’t expecting Gordon to embark on a one-man assassination mission and the parts of the planet he’s traversing wouldn’t necessarily be packed to the gills with an army of foes. Plus, the areas of Xen have different aesthetics and focuses, making them feel distinct. Even if they don’t feel quite the same as what came before, they’re strong on their own. 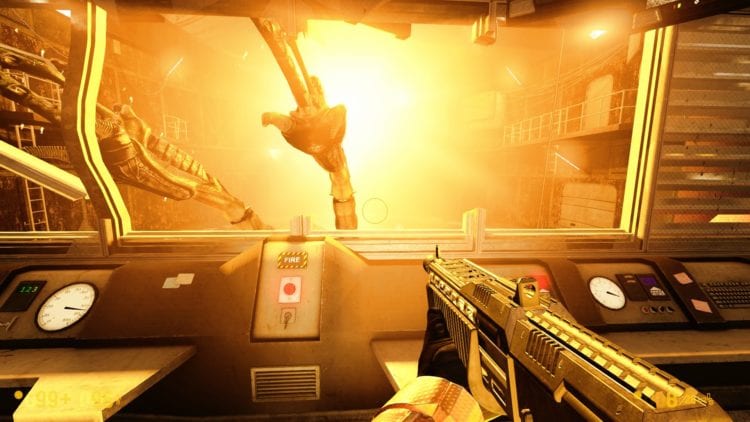 The entire suite of weapons from the original game returns here. They all feel similarly good to how they felt in the original, if perhaps weightier in spots. Some weapons, bizarrely, hold less ammo than they used to, which I really felt with the magnum and bow. Some aspects of the weapons could have probably used some further updating. Black Mesa plays like a modern game, comparatively, so it’s weird that only two of its weapons have a way to zoom in, especially when you consider that the soldier AI is completely different now.

Marines in the game are now practically Combine soldiers. The Combine felt great to fight in 2004. In 2020, they’re laughably dated in many respects. They still love to just run up to you and give you ample time to shoot them to pieces. Often, they don’t seem to understand the concept of taking cover and wander around aimlessly. Making them feel even weirder is that they’re still just as spongy as the Combine soldiers were.

It feels downright silly to shoot one of them in the face with two shotgun shells and watch as they don’t even stop shooting. And, boy, they’re still insanely accurate. If even the slightest piece of you is exposed, their bullets will find a way to hit you. Even if they’re so far away that hitting them with the same weapon you’re using becomes impractical, they’ll still land shots on you with a ton of precision. In comparison, the alien enemies mostly feel about right, although the game still loves to surprise you with them and have you get shot in the face the absolute second you make contact. 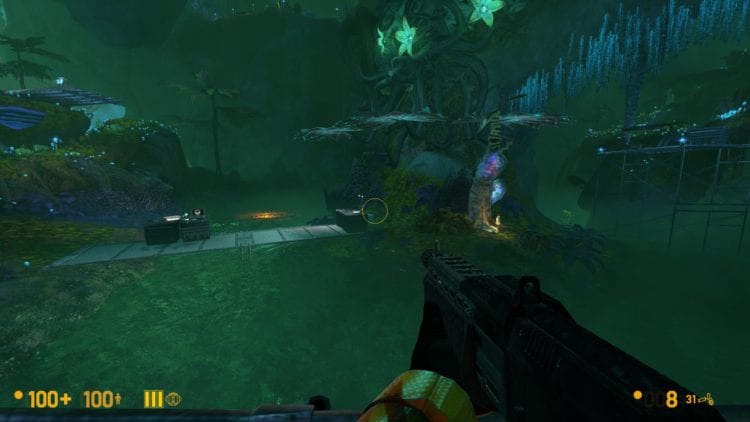 The amount of damage your shots do is also strangely inconsistent in Black Mesa. Sometimes you can take enemies down with a single point-blank double shotgun shell blast. Other times they’ll be just fine. And since the game uses Source Engine physics, much of that applies to you as well. I’ve been one-hit killed because I walked through an opening door at a weird angle. I’ve seen most of my health demolished because I bounced wrong or because an enemy threw something at me. Other times the damage will be negligible.

These issues do illustrate how Black Mesa is still very much a game built around quicksaving, even if autosaves are frequent and on-point. There are a ton of situations where you get killed immediately by something you can’t have possibly known was coming. Many times, avoiding damage seems borderline impossible. To its credit, though, the game gives you plentiful supplies for most of its duration. And, barring random damage spikes, the amount that enemies hurt you is also very fair.

Once you get to Xen, though, the ammo the game gives you for certain weapons drops off. I didn’t find any bullets for my pistol and machine gun for very long periods. It makes sense due to you being alone on an alien world, but I didn’t like being unable to use certain weapons. While chances to heal are available at well-paced intervals on Earth, on Xen it felt like I was walking right by healing spots one after another, to the point where I didn’t even need to use them most of the time. It can also be unclear how to progress in Xen compared to the other levels. As said, these areas are good, but seem like they could use a bit more work. 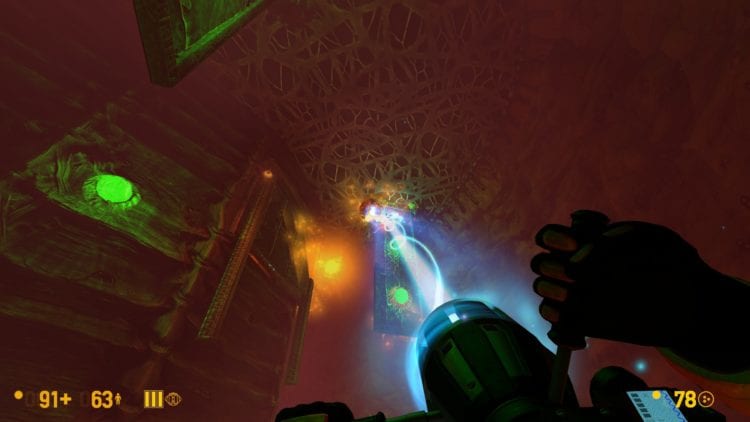 Xen features the same two bosses that it always has, the Gonarch and Nihilanth. But they’re infinitely better here. They feel like actual boss fights this time around. Neither is particularly difficult, but Nihilanth, in particular, is quite the stunner. I was blown away by how exciting the fight was and how great the visual effects looked.

Speaking of visuals, though, Xen can be downright gorgeous. The developer did an amazing job of rendering this alien world. It doesn’t necessarily look as weird or off-putting as it did in the original game, but many of the locations are impressive from a technical perspective. That being said, I had a lot of frame drops on some capable hardware that leads me to believe there are some optimization issues.

But the 1.0 version of the game is absolutely the best Black Mesa has ever looked. Some new features were added in and the game looks sharper and more impressive than ever before. Before 1.0, I thought it was showing its age, but the new features make a very noticeable difference in regards to presentation. The menu even warns you if you push some of these up to their highest, as the devs went all out. Plus, 1.0 features an all-new UI that looks a hell of a lot better than one found in Half-Life 2, which it had been using since the initial release. 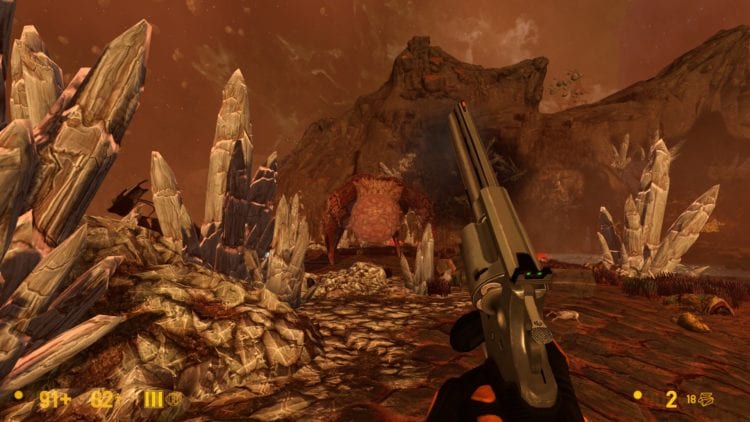 Black Mesa is certainly an ambitious project and, for the most part, it improves on Half-Life. Depending on who you ask, it could very easily be considered to be the best game in the series now. Some parts are questionable if treated as a wholly modern game, but, to be fair, it isn’t. It’s a partially faithful, loving remake of a 22-year-old game using technology from a 16-year-old one, so it’s going to be held back in some ways.

But it’s a great experience from start to finish. The new Xen might have some issues and, perhaps it can drag, but this is very much a game that delivers on its initial promises. Not only that, but it’s lengthy. As the type that constantly restarts sequences to try and get through them with taking the least amount of damage and using the smallest amount of ammo, Black Mesa took me about 25 hours to get through. And I’m sure I’ll be going back to bask in the game’s nostalgia before long. Plus, the multiplayer maps will all be compatible in a few days, so I can always get annihilated there too.

Black Mesa is dated in several ways and the new Xen levels have some issues, but this is an excellent experience that old fans of Half-Life and people who may have never played it before should absolutely check out.