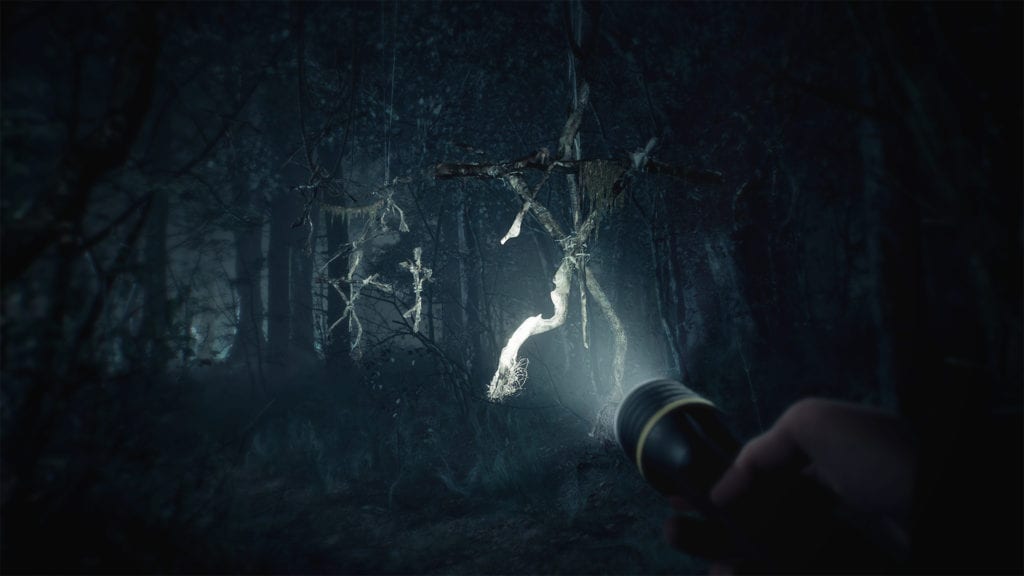 I remember the reveal for the Blair Witch project during the Electronic Entertainment Expo (E3). As the darkened scenes flashed on-screen during the Xbox briefing, I couldn’t help but find myself intrigued. Moreso because I thought it might be a continuation of The Evil Within franchise. Then the “Blair Witch” title flashed on-screen, leaving a lot of people, myself included, with a feeling of confusion.

I say “confusion” mostly due to the fact that this was going to be yet another video game adaptation of a movie. And, as much as Hollywood and the video game industry attempt to marry film and gaming, the end result is often a disjointed effort.

Ellis is the main protagonist in the game. You are immediately introduced to some of his struggles with mental stability and reliance on his canine companion, Bullet. As the story opens, you discover Ellis has volunteered to help find a missing child in the woods. And you can quickly start to make some assumptions and guesses as to what this will mean for their relationship and dynamic. During the game, you’ll have direct command over Bullet. You can have him seek, have him stay, or even just pet his big old German Shepherd ears and love on him. While this is one of the main mechanics in Blair Witch, though, I never really felt it was part of the core experience. There are early warnings that Ellis’ mental state will become erratic if Bullet ventures too far off. However, it never really started to deteriorate, even when Bullet ran off in various directions. That said, Bullet’s whines and barks are extremely authentic. I had to check many times to see if my own dogs weren’t crying.

The first thing that had me fascinated with the direction of Blair Witch was its approach to the genre. At its core, the game is very much a walking sim and psychological thriller. There isn’t vast exploration, nor is there crafting or even combat for that matter. However, developer Bloober Team manages to squeeze out a lot of content and depth from the game’s atmosphere, even in relatively small locations. There are interactions with items you’ll find littered throughout your time, also providing a platform to more intimately get to know Bullet.

Outside of your pet-partner, the game uses a camcorder to solve puzzles and make discoveries throughout the environment. This is done in a very linear way most times. For example, you might encounter a locked door. Searching the room might lead you to discover a tape left on a table or shelf. Popping in the tape in your camcorder reveals past events when the door was previously opening. Rewinding and pausing the camcorder on that screen magically makes the door unlock and open, allowing you to continue on your search. This was cleverly introduced and executed throughout the entirety of the story. It not only provided a callback to the movies, but it also made possible the idea that something could exist regardless of whether you’ve seen it or not.

As previously mentioned, I’ve never really felt that Hollywood and video games have come together as one. There are often franchises that prove utterly successful in the digital space – yet when a movie is made from them, they can’t fill all the gaps that stem from it being derived from interactive media. That means you end up sitting in a theater watching a story unfold vs. being mostly in control of it when playing an actual video game. The feel of Blair Witch found a nice groove, though, taking from the source material and crafting something that’s more than just an adaptation. 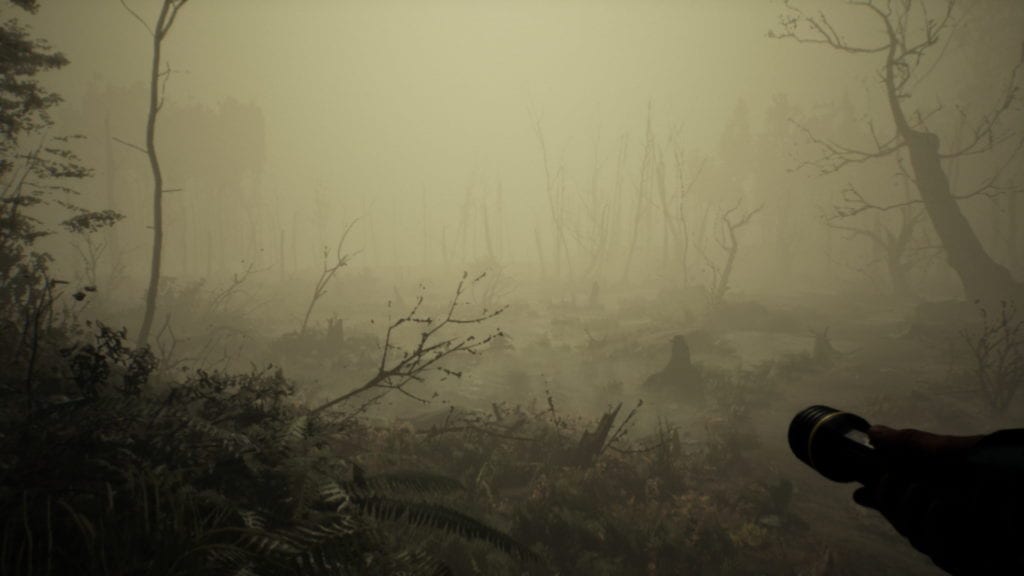 Throughout the game, there are moments of intrigue, jump-scares, and an overwhelming feeling to keep pressing on for the truth. Is everything happening around Ellis real? Is it part of a series of flashbacks? Where did the missing child run to? Most of these are portrayed on-screen with various sequences, not requiring them to be explicitly told within the game’s dialogue. However, this sometimes creates more open-ended instances.

Many questions start to surface as you play. And, although it would be nice to wrap everything up, there continues to be this cycle of new questions being riled up before others can even be answered. This is the case for most of the journey in Blair Witch. But, then again, the movie franchise also plays off of the same jump-scare, mystery, psychological thriller formula. At face value, that might seem like something that could stir up a heavy case of frustration – and, admittedly, at times it did. However, something about it also pulled me back in and kept me pressing on to figure out the truth — if there even was one.

Dizzy on the comedown

One of the biggest quarrels I had with Blair Witch was in its design and some of its mechanics. The experience is done in a first-person view, oftentimes giving off Resident Evil 7 vibes. The biggest difference, though, was in the way some of the scenes were executed. 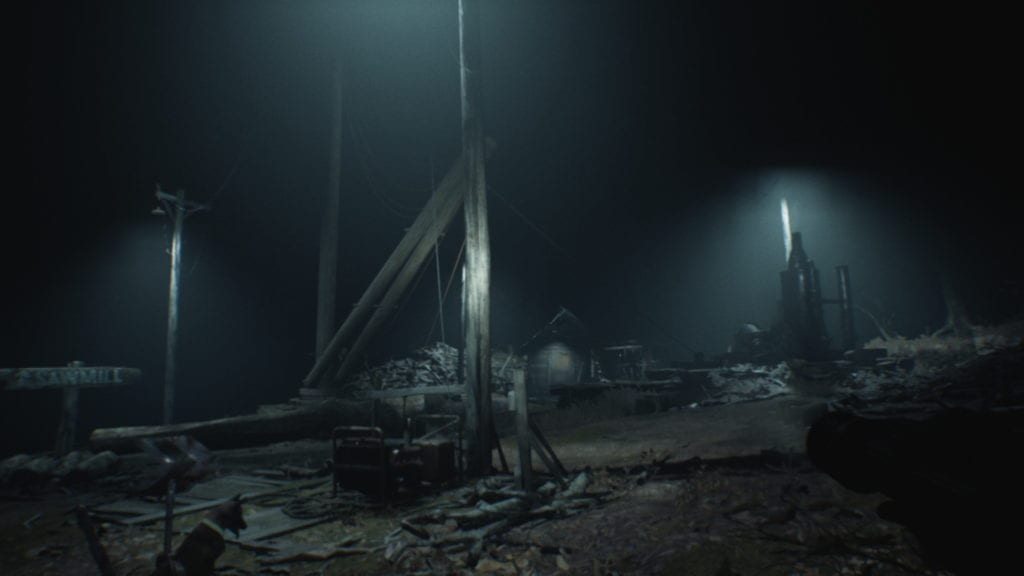 By default, Blair Witch is a relatively dark game. Many of the scenes are pitch black, with only a dim beam of light cast from your flashlight. In tight spaces, navigating some of these environments in the dark was cumbersome, and it often left me dizzy. It got so bad that I had to step away from the game numerous times after becoming nauseated. This isn’t necessarily a critique on the game per se. However, if you plan to jump into the experience, be prepared for some close-quarters jump scares and revisitation to the same area over and over again.

Admittedly, I was surprised in more ways than one with Blair Witch. Bloober Team has managed to put together a clever take on the psychological thriller genre. Not only that, the mechanics of the game, although sometimes shallow and lacking a full commitment to their design, provide some lengthy gameplay and surprises throughout the entire playthrough.

After completing the Blair Witch, I can say that I have more questions than answers. But, given the time of year of its release, it’s probably something worth playing through a second time. The game isn’t extremely long, coming in at about five hours of length. But it’s an experience that’s rather short and digestible. I only wish that it closed out with more of a concrete experience rather than leaving me with a basket full of questions and nowhere to take them. Maybe I’ll just cast them into the woods and hope for the best.

Blair Witch is impressive and cleverly designed in many ways. Although there are answers to the abundant amount of questions that start to stir up over the course of the game, the end result still leaves many of those to be unanswered. The visual and sound fidelity provides an excellent foundation to the story that is being told. For psychological horror fans, it will scratch that much-needed itch.