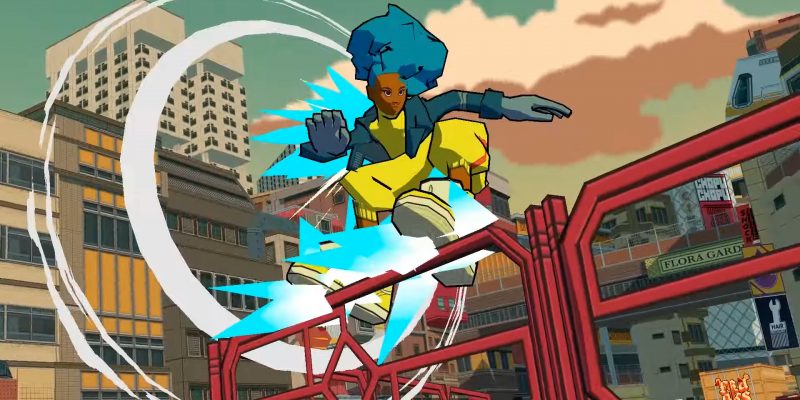 I was hoping to hear more news on Bomb Rush Cyberfunk — the spiritual successor to Sega’s Jet Set Radio — this year. And, wouldn’t you know it? Today my prayers were answered. Developer Team Reptile released the official gameplay trailer for Bomb Rush Cyberfunk earlier today. It’s a bit longer than the teaser, showing off the game’s JSR-inspired art style, while pumping up the beats — all without Beat.

As a spiritual successor to Jet Set Radio, the game will contain a lot of elements that fans will notice, with some tweaks. Bomb Rush Cyberfunk does away with the cool-during-the-’80s rollerblading. Instead, characters will sprint on their own two feet. However, just running around a city is slow. The solution? Strap a jet pack to their backs and let ‘er rip. Bomb Rush Cyberfunk follows Jet Set‘s art style and environmental design to a science. Characters and the world they inhabit are built from chunky polygons and colorful cel shading. There’s even grinding, and the all-important graffiti art.

Of course, all the aforementioned is only half of what Jet Set Radio put down — the other half contained the rocking jams. And Bomb Rush Cyberfunk delivers in the official gameplay trailer. Within moments of the trailer, a character starts up a track by none other than Hideki Naganuma, the original composer for Jet Set Radio and its sequel. And you know what? The guy hasn’t missed a step. The trailer features the song “Get Enuf” by Naganuma, and sounds like it could easily come from Jet Set Radio or its sequel. If the soundtrack to Bomb Rush reaches similar heights of its spiritual predecessors, then I know I’ll have plenty of great tracks to listen to for years to come.

The music just turns me on

If the gameplay trailer for Bomb Rush Cyberfunk is indicative of what to expect, then count me in. I need to know more about that anime villain with records jammed in his shoulders. The game looks like a lot of fun, and I’ve been wanting a new Jet Set Radio in my life for years now. While it’s not official from Sega, I think this game will scratch that itch. Hopefully Team Reptile is up for the task. Judging by the gameplay I saw today, I’m feeling confident.

We’ll know for sure how Bomb Rush Cyberpunk lives up to the legend it chooses to mimic when it hits PC via Steam in 2022.