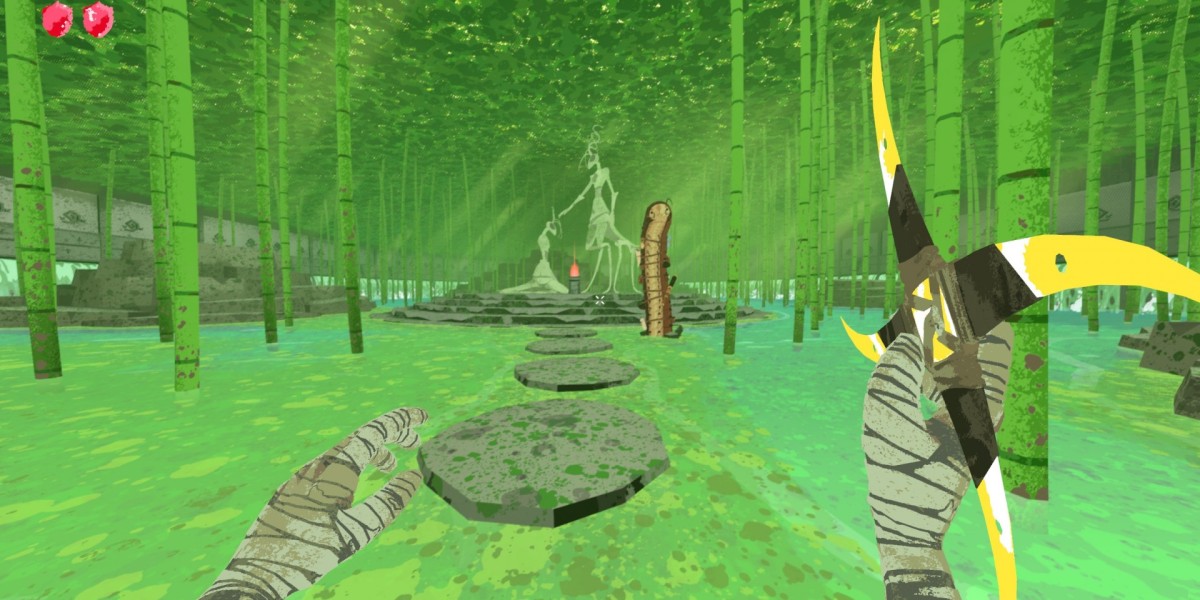 To be able to quickly hurl yourself with exact precision and merciless speed is an act that few games have achieved well. But that is what Boomerang X is all about. Put simply, the controls, movement, and general gameplay mechanics here are impeccable, and many other games would be lucky to have such strengths. But the game’s short length and lack of ambition in its overall structural design hold it back from achieving the greatness that I feel the developers might have at their fingertips in the future.

Your character wakes up on the beach of an island. Upon heading into a nearby cave, you discover a boomerang. After taking it, you head further into the complex, only to learn that it’s infested by these dark beings that resemble some sort of shadow insect. It’s your job to clear the island of this infestation and save it from certain peril. There isn’t much more to it than that. There’s an NPC who shows up occasionally to mostly spout some odd dialogue. Developed by Dang!, Boomerang X was published by Devolver Digital, so it has to be delightfully strange in spots.

Boomerang X has rudimentary, yet colorful visuals that add life to the island. The game’s arenas are often color-coded to differentiate them. A lot of personality is conveyed by the game’s presentation, despite how dead the island actually is. Due to the simplicity of the visuals, the game also runs beautifully. At 1440p I easily got 120 fps at nearly all times on a mid-range card. Since the gameplay is so fast and fluid, it truly benefits from higher framerates, so it’s a blessing that the game runs as well as it does. 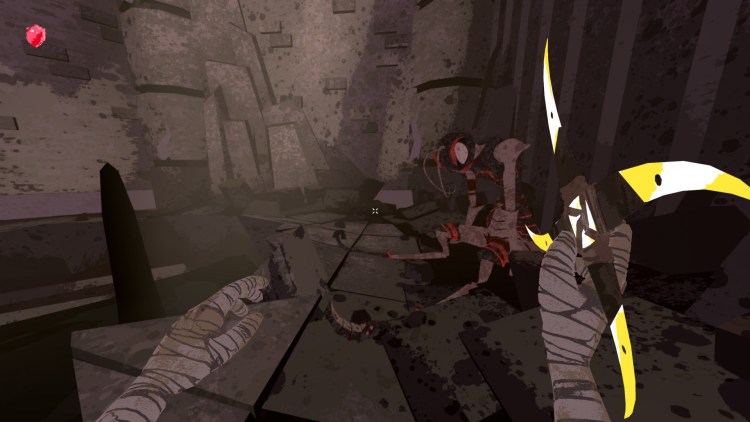 The gameplay in Boomerang X is all about constant movement. At first, this seems like any other first-person shooter in that regard. Your character doesn’t move all that quickly on the ground, but their momentum upon jumping forward is breakneck. You’ll find yourself moving around by jumping a lot in the beginning due to this. Once you get accustomed to the general mechanics, the game grants you an ability that readily demonstrates its true colors. As you’ve likely surmised from the title, you throw a boomerang around a lot. Yes, it’s your primary attack, but that’s not all it’s used for.

After acquiring an upgrade, clicking the left mouse button after having thrown the boomerang will immediately teleport you to it. There are no limits on this. For all intents and purposes, you can fly through the air, carefully controlling your movement every step of the way. It’s exhilarating to move through space by teleporting. Another imperative tool is that you can slow down time by holding the shift key while charging your boomerang, which allows you plenty of opportunity to carefully aim at enemies. You can also call the boomerang back to you after throwing it, or stop yourself from moving forward while in midair. The gameplay is frenetic, but controlled. You zoom around the environment like a bolt of lightning, only to stop and aim when need be. It’s pitch perfect and highly compelling.

The combat itself makes excellent use of movement. There’s a good variety to the enemies, which fly overhead or move along the ground. Many of them are disposed of after a single hit, and some have weakpoints that need to be attacked with pinpoint accuracy. The slowdown while aiming is invaluable for this. Enemies often have notably different strategies and some have more than one weak point that must be attacked. Sometimes, though, they’re more tedious to fight than anything. One enemy teleports around and shoots green bubbles at you. It’s only vulnerable when it’s surrounded by red energy. 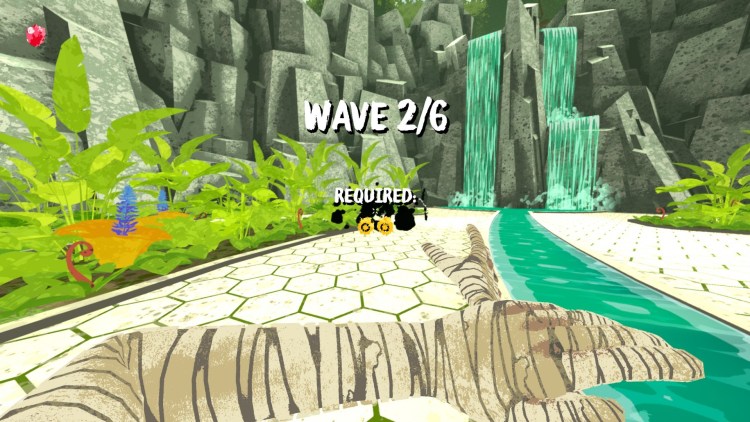 Other enemy patterns are simply obnoxious, or their attacks are irritating. One enemy creates giant energy pillars, while another blankets the sky with a black barrier that harms you when touched. You’ll periodically find bowls filled with red liquid in Boomerang X that permanently increase the number of hits you can take before expiring. You can refill these by standing on red platforms in combat areas, but they leave you completely vulnerable, and sometimes there’s barely any way to heal without getting hit first in the process.

What makes matters worse, however, is that there’s practically no invulnerability time between taking hits. If you get caught in the aforementioned energy pillar, for instance, you can easily lose two or three armor points in rapid succession. This combined with some enemy patterns can make Boomerang X feel cheap from time to time. But the absolute worst thing about the game is how it’s structured. You don’t go through levels or even progress through areas, really. Instead, the game is focused on navigating to combat arenas where you simply dispatch waves of enemies to move on. It’s as basic as it is uninspired. Truthfully, the masterful gameplay deserves much better than fighting waves in an arena. It makes the game seem almost like a tech demo.

These arenas are connected to areas you simply navigate through with zero risk, or tutorial areas for your new abilities. Sometimes you have to hit strings in order to open the way forward for unexplained reasons, but these sequences feel like padding in a game that feels like it’s made of padding. When you enter an arena, it’s empty save for a pink crystal. You simply need to hit the crystal for enemies to show up. I wish there were platforming sections of some sort beyond the tutorial ones. 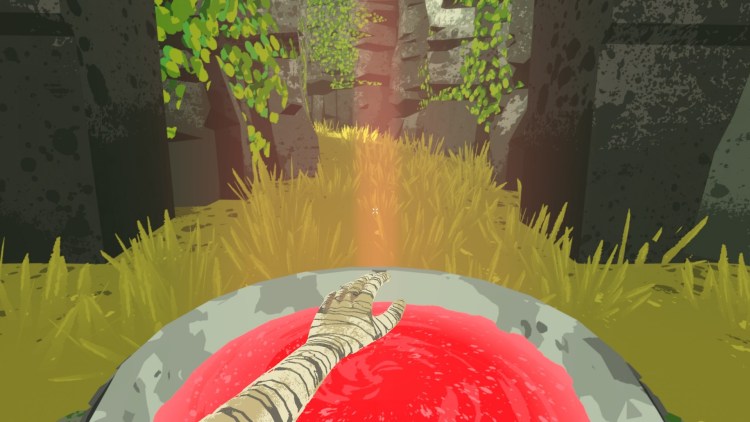 Your mission isn’t simply to eliminate the enemies in every one of Boomerang X‘s waves, however. Each wave has a certain number of enemies with a yellow icon on them. Only these are required to complete the wave. There can be half a dozen or more waves per arena and running out of health means you have to start each from the beginning. When you get to later challenges, having to redo multiple waves at a time because you slipped up a bit is unwelcome and can be frustrating. The game is also only a few hours long, so it almost exclusively focuses on you fighting through a handful of these arenas before the credits roll.

I truly like Boomerang X as a whole. It has excellent gameplay and controls, yes, but these are paired with uninspired game design that strikes me as more of a proof of concept than anything else. The gameplay is compelling, but its structure makes for a surprisingly uneven experience. Once you beat the game, a new game plus opens up where you get to keep access to a few abilities for earlier use. It’s much tougher than the original run as well, plus it grants you fewer health upgrades.

The game is easily worth playing due to its stellar gameplay and unique presentation, but the focus on arena battles above all else is purely disappointing. I truly hope the developers make another game, but with more substantial game design that lives up to the potential that the gameplay holds. I feel that there’s a great game here that’s begging to be made, but this is just the teaser.

Fantastic gameplay paired with a game structure that resembles a tech demo makes Boomerang X worthwhile, even if it doesn't live up to its potential.