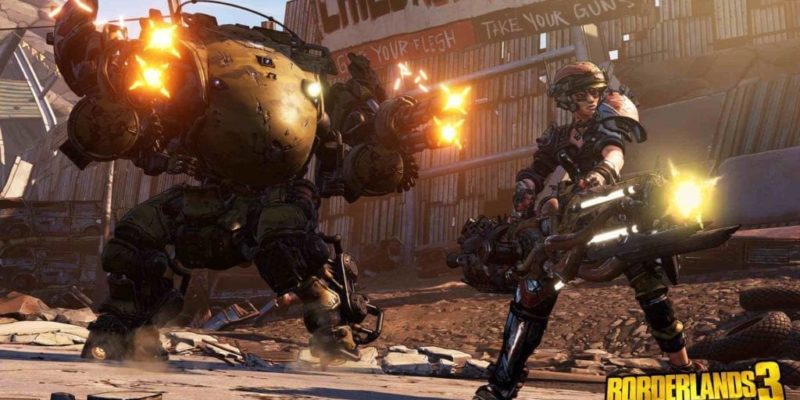 Fans who felt that the Borderlands 3 gameplay reveal in May was fun, but would have been better if mechs with giant guns were involved, are in for a treat. Gearbox Software introduced its third playable Vault Hunter, Moze the Gunner, at a lightning fast presentation at this year’s E3 and she’s bringing the heavy firepower down on all your foes. Her special ability is to call down a mech named Iron Bear to blast everything in sight.

Moze doesn’t command her mech like Gaige the Mechromancer does with her Deathtrap robot. Instead, Iron Bear is a heavy weapons platform that is piloted directly to cause extreme damage to enemies. Teammates are also able to jump onto an optional gun turret and wreck stuff, turning Iron Bear into a teamwork weapon.

Her three skill trees determine the weapons and equipment Iron Bear fights with. The Demolition Woman tree should appeal to those who love explosions, since it enhances the grenade and rocket launchers. Those who would rather fill rooms up with bullets may prefer to use the Bottomless Mags tree, which has a minigun and flamethrower that never needs to be reloaded. But they are prone to running out of ammo and overheating. However, this is Borderlands, so sometimes faults can be turned into advantages. Certain skill upgrades use the heated barrel to transform bullets into fire ammunition.

Lastly, those who enjoy watching several enemies die from one should look to the Shield of Retribution tree, which has railgun that does electric damage to multiple foes. Of course, it has a significantly slower firing rate compared to the other weapons, but its complemented by “bear fists” to let players get nice and punchy. That’s in addition to surrounding the mech in a bubble shield to help mitigate damage.

Taken altogether, Moze ends up being one of the most versatile characters of the four. With skills that include offense, defense, and support, she can be customized to perfectly complement a team.

I chose to diversify my loadout by equipping a minigun, grenade launcher and bubble shield. This setup allowed me to leap straight into the middle of the action and unleash the fury on everyone I saw. The only downside to spreading out my points was that I wasn’t able to specialize any single skill, which meant that my minigun overheated fast and often. I was a little shocked at exactly how fast the gun overheated and how slowly it cooled down. Even firing in short bursts did little to stop it from shutting down every few seconds. 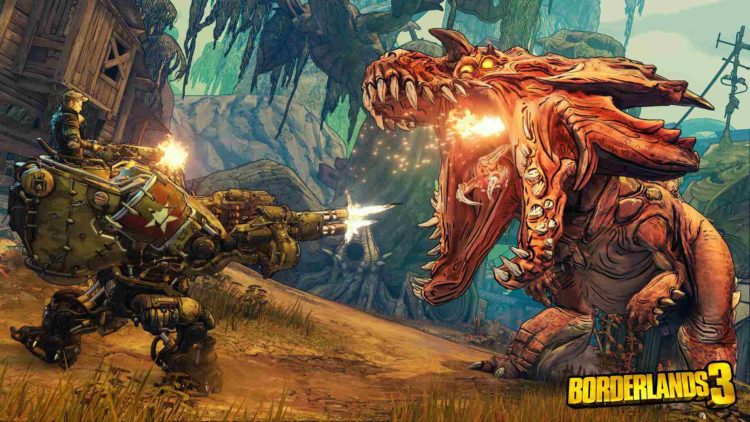 I had a little trouble compensating with my grenade launcher to compensate when my main gun was down due to it using slow-fuse bouncing explosives. But I eventually got used to its low firing rate, especially since most enemies aren’t great at running away from nearby explosives.

Iron Bear is a fantastic weapon, especially after you’re pinned down with low health. Jumping into the mech gives Moze some time to recover while still engaging with the action. Unfortunately, one of the things the mech can’t do is duck behind cover. So, Iron Bear was usually destroyed within a minute or two soon after tons of enemies inevitably came streaming in. However, Moze doesn’t die inside the mech, so players can keep on fighting.

Moze can’t be quite as brazen as I prefer to play when outside of the mech. The problem with having most of the skills associated with the mech is that being outside of it makes you feel kind of ordinary. She doesn’t have a ton of hit points, so I spent a lot of time dodging and biding my time until Iron Bear was ready for battle again.

Perhaps a different loadout would have changed my perspective, but right now, Zane the Operative remains my favorite Borderlands 3 character so far.

It’s fitting that her premiere coincides with the reveal of Eden-6, one of the planets players will land on in the upcoming game. It also happens to be where weapons manufacturer Jakobs is headquartered. The company makes some of the most powerful guns in the Borderlands universe, which is perfect for conserving ammunition while killing.

As expected, players will do favors for the Jakcobs family while exploring the large jungle and swamp environments. It’s a welcome change from Pandora’s desert and the city districts of Promethea, introduced in the gameplay premiere. In typical Borderlands fashion, the planet has large aggressive creatures with lots of teeth, pretty much like all other life in the galaxy.

The planet was subsequently abandoned by all the major corporations except Jakobs, which has enjoyed a monopoly over the swamp planet and its active volcano ever since.

Having friends will be extra beneficial in Borderlands 3. For instance, items that are sold by people on your friends list have a chance for showing up in your vending machines. Also, an in-game mail system will be included, so you can send weapons directly to your friends. Local split-screen is making a comeback, but if previous releases are an indication, it will probably only be supported on the console releases.

Borderlands 3 releases on September 13, 2019, and will be an Epic Games Store exclusive.

Even my mom knew Keanu Reeves was in Cyberpunk 2077