The Albino Wyyyschokk, the first legendary beast on this list, is a far more dangerous foe than the AT-ST you smashed apart not long ago. Despite being a right fat bastard, the Albino Wyyyschokk is incredibly agile, with abilities that can slow or hinder you, allowing it to get close enough to inflict pain. Oh, and it’s a giant, white spider. Have fun trying to sleep.

You have more to contend with while fighting this unfriendly arachnid. In addition to being agile, it has a lot of moves it can use against you. Get too close and it can bump you away with its arms. Too far away? No worries! The Albino Wyyyschokk will rush you down in moments or leap in the air with an unblockable attack. It can also send out three web balls spread horizontally that can immobilize you for a few seconds. It can bite if you’re too close, or spin up web to drop at its feet and slow your movement. It’s kind of a butthole. 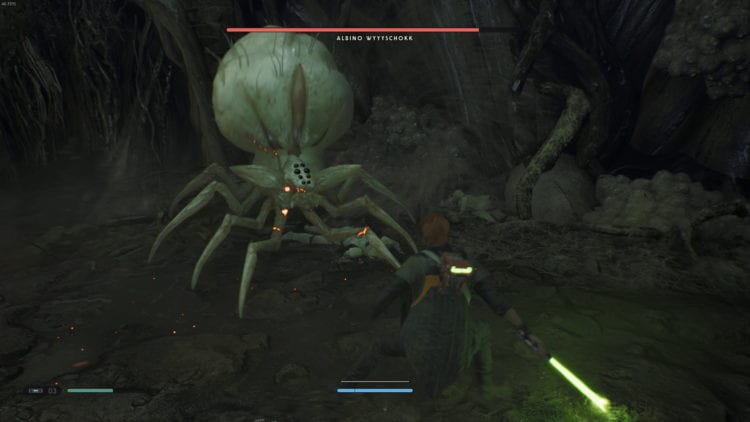 However, it can be beat. There are a few golden moments of opportunity for you to attack the Albino Wyyyschokk, one of which is when it’s spinning up its web balls. It takes a few seconds for it to get the attack ready, and during that time you can close in and slash at it for a quick stun and damage. The close-up unblockable move is similar to that of Oggdo Bogdo; wait for it to open up its arms and glow red, count to two, and dodge. You’ll have plenty of time to damage it afterwards. Its bite attack takes about a second to charge up. So when you see it wobble its head, pause a moment and then dodge its attack. You can use your Force Slow ability against it, but it’s wiser to use your power for the strong attack for more damage.

Next up, the Security Droid.