At this point you’re pretty deep into Fallen Order‘s story. Hopefully, you’ve had plenty of practice parrying blows, because you’re gong to need that skill when facing the Ninth Sister. While the fight with the Second Sister leaned heavily on timing your parries, her compatriot will test your abilities to the limit.

The Ninth Sister fight happens late into your second journey to Kashyyyk, the Wookie homeworld. She awaits you for a climactic battle atop a massive tree; it’s nice and fitting for what I feel is the best fight so far in the game. 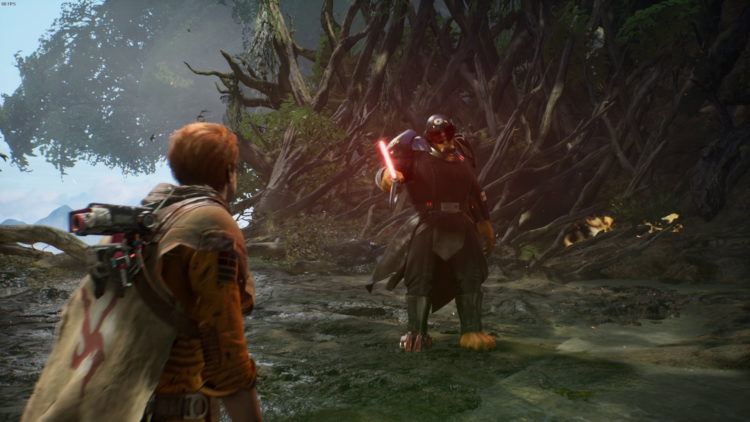 Indeed, this is the quintessential Star Wars fight. No theatrics, no standing around, just two powerful Force wielders clashing lightsabers and throwing Force powers left and right. The massive Ninth Sister walks straight up to you and starts swinging. Naturally, your ability to counter her blows is pivotal for your survival. Parry, attack, parry, attack is the rhythm most of the fight will go. She can also take you down with an unblockable charge, which you have to dodge at the last second. Doing so will give you enough time for a couple quick attacks.

At times, she will use her Force powers against you. She can leap over a distance and deliver an unblockable attack, or use Push to stun you. The latter can be halted by blocking, so if you see her bring her free hand back, hit that block button. 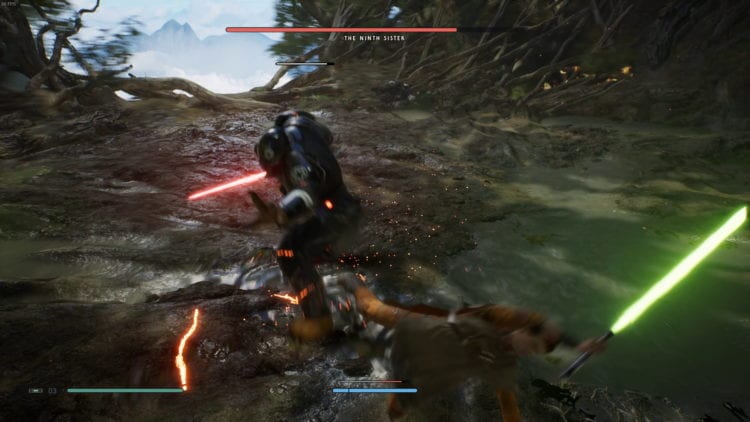 When you take off about half her health, the second phase begins. Her weapon turns into a double-bladed lightsaber, and things get a little hairy. It’s much harder to time parries against the double-bladed lightsaber, which she twirls around like a turbine. The Ninth Sister also adds a charged attack during her new combos, so parrying and attacking right away is not often a viable tactic. At times, she also throws her lightsaber at you, so get ready for a dodge or block. On occasion she will jump into the air and send, um, dark side energy (sure) into the ground as a shockwave. You can jump over the attack as it gets close — she usually does this move twice in a row.

The Ninth Sister is susceptible to Cal’s Force abilities. I had both an upgrade to my Force Slow and the lightsaber throw unlocked. Using Slow works great, especially during the times she twirls the double-bladed lightsaber while preparing an attack. During those moments you can also toss your lightsaber for a quick bit of damage and a short stun.

Next up is the game’s token Dark Souls boss fight, the Gorgara.