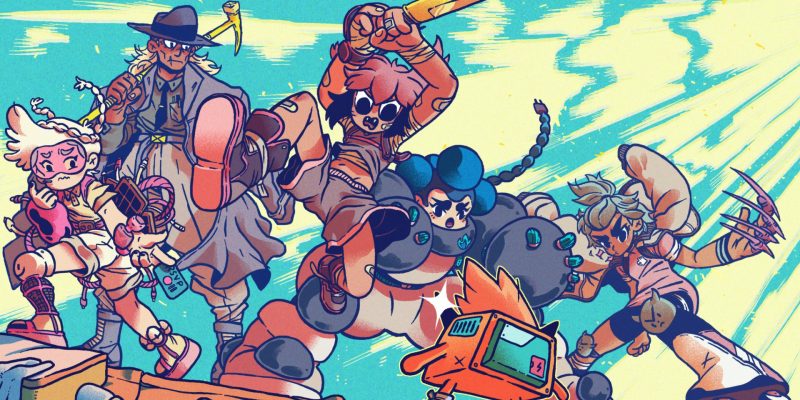 Turn-based team RPG battles are a gaming tentpole. They’ve been a cornerstone of the medium for decades now, but people still have new iterations up their sleeves. Bravery Network Online lets players duke it out, uh, online in 5 vs 5 battles. The game entered Early Access today, and while I’m already quite fond of it, it currently has some issues that could scare players away until fixes roll around. But the question stands: is it worth it?

Bravery Network Online takes place in the post-post-apocalypse, which is an amusing way of saying that it’s different from modern society but also not post-apocalyptic. You play as a Becker, a digital being created by FIRE, which is an… okay, I’m not quite sure what it is. It’s digital fire, not real fire. Beckers lead teams of five digital people into battle against other teams. They’re kind of like Pokemon except they can talk and are all humanoid. The teams you put together can battle in single-player content or online.

One thing that sticks out about Bravery Network Online is that it’s funny. I found myself laughing on multiple occasions, as the dialogue is witty and well-written. Beckers have a chassis and face that can be swapped out for others. The default Becker face is horribly ugly and its appearance leads to some amusing reactions from the rest of the cast. The digital fighters all have unique personalities that pairs well wit the game’s quirky and fun art style. Think “Cartoon Network original series” and that sums up the general aesthetic. 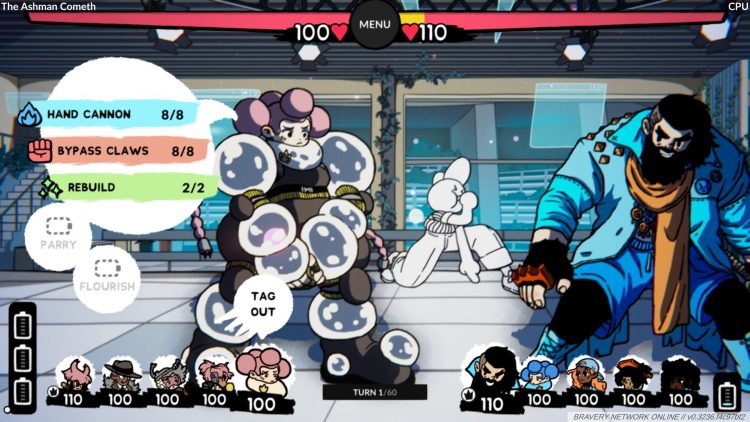 As Bravery Network Online is a turn-based RPG revolving around picking the right character for the right fight, it has unique mechanics. Each character has varying levels of offense and defense in three stats, which I’ll just call red, blue, and purple. Red is standard physical attacks, blue is digital attacks, and purple is attacks that hurt your opponent’s feelings. This is often literal. One purple attack is a bribe. Yes, it still does health damage. There are other weird attacks too, including one that makes characters hungry, which causes hunger damage to hit them at the end of every turn.

Each character can be tagged in and out during your turns, but this uses up the entire turn. If an enemy character does a lot of red damage but has low blue defense, you’ll want to tag in a character with high red defense and high blue damage. Keeping a balanced team is a must. You can check character stats at any time by clicking on their portraits and hovering over attacks will tell you how much damage they’ll end up doing. It’s tactical and satisfying, but it’s not all sunshine and digital roses.

As of right now, I’m getting server disconnections almost constantly. I was close to finishing a fight when I got disconnected, requiring me to start it over from the unskippable dialogue sequence leading into it. I tried to restart it three more times after that, but disconnects kept occurring and I wasn’t able to actually start the fight. I’ll dive deeper into the game when this is fixed. There’s also a bug where players aren’t able to change their teams, which is a fairly large issue, although a patch is forthcoming. I like Bravery Network Online a lot. It’s funny and entertaining, but it won’t be worth it until the server disconnects calm down. I had to manually shut the program down and restart it over half a dozen times. Not a great look. 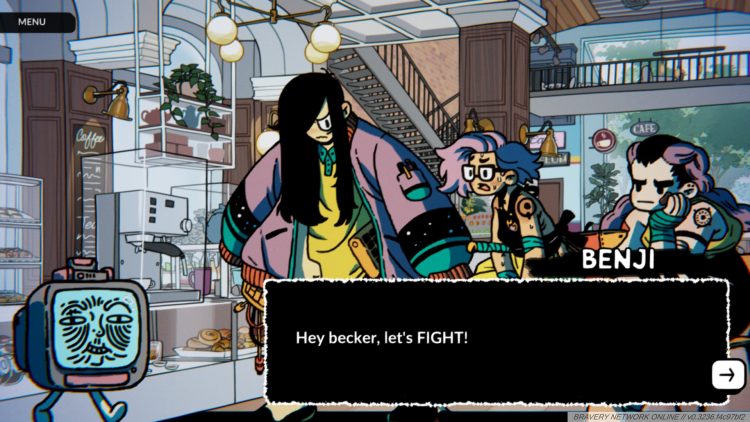