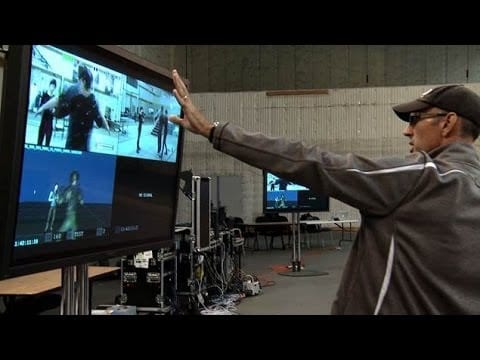 I got a bit suspicious when this “behind the scenes” look at Call of Duty: Advanced Warfare finished with 30 seconds still to go. Sure enough, it’s actually just an advert for pre-ordering the game. The official IncGamers advice on pre-ordering games is this: don’t do it.

Anyway, before you reach that rubbish advert you get to see Sledgehammer’s creative director Bret Robbins with weird post-production lens flare effects on his face talking about storytelling. Apparently they had a chat with some military types when making Advanced Warfare, as well as consulting with “futurists.” Futurists are seemingly people who speculate about what stuff will be like in the future. Back in the day, I think these were called “sci-fi authors.”

Robbins says Advanced Warfare has developed “new storytelling techniques,” which sounds exciting at first because nobody has created one of those since the very first human societies shared stories orally. Turns out it’s just something to do with motion capture though. Oh well.

We’ve find out whether this makes much of a difference when Call of Duty: Advanced Warfare comes out on 4 November.