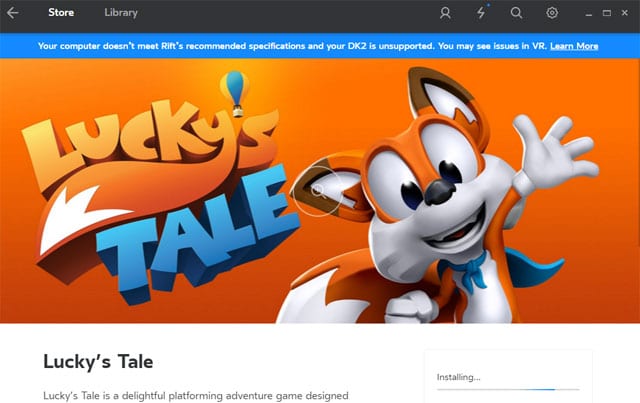 Not everyone is grabbing the consumer version of the Oculus Rift right away and some DK2 owners are holding off. That doesn’t mean you can’t try Oculus Home right now if you own a DK2.

We fired up our DK2 to find out how easy it was to get working with then new consumer version drivers and Oculus Home, and despite a few warnings of hardware not being found during the install process, it actually all worked fine.

First of all you need to remove all the previous Oculus drivers from the system which will require a reboot. DK2 users then need to simply download Oculus Home installer and get cracking with the install. During the install process there will be errors and spinning detection icons indication hardware is not detected but these can be skipped in the install process. You just need to follow the process right to the end.

On our first attempt we managed to get our DK2 straight into Oculus Home and start trying stuff out. The head tracking works perfectly well, and as Lucky’s Tale is free, it’s a good place to start. We had no problems getting it to run and even ADR1FT ran without any issues.

Users will need an Xbox controller to use Oculus Home or play anything so if you have one kicking around then you’re all set. We can’t verify everything will work in the DK2 but if you want take the risk and spend some cash it’s up to you.

There is also a warning inside Oculus Home stating that you are using a DK2 which can’t be removed but it’s not really a problem.

This is a good way to check out what’s on offer without spending a load of cash on a new Oculus Rift or simply ease the pain of waiting for you consumer version to arrive.