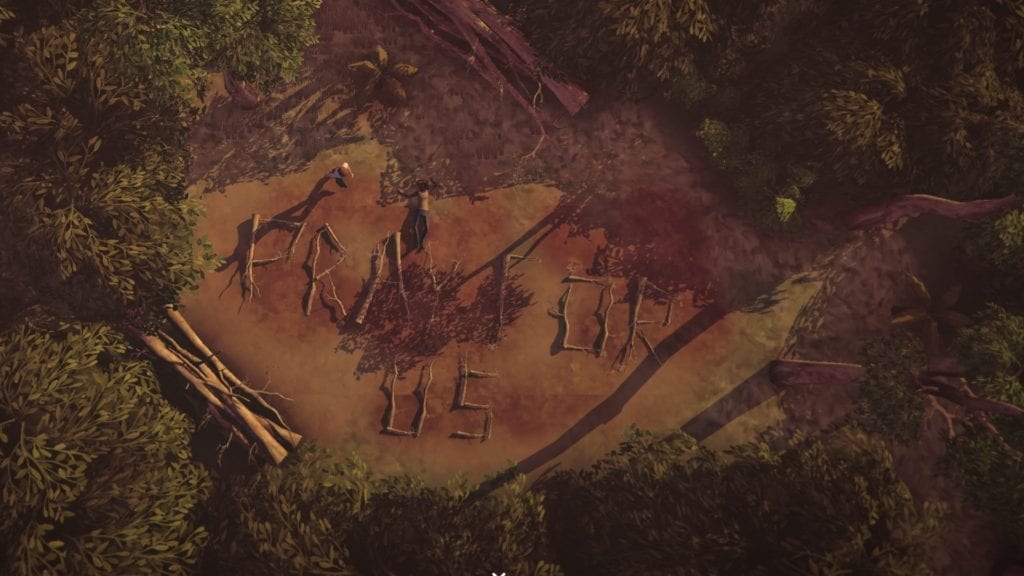 The Church in the Darkness has a fascinating concept, and it’s a concept that ultimately buoys up its more lackluster elements. Set in the 70s, a Christian group led by a charismatic pair of preachers has set up a compound in South America and essentially cut off communication with all friends and relations. Naturally, the word “cult” starts getting thrown around a lot – and your nephew is one of their converts.

So, you’re sent in by your family to infiltrate the cult compound and find your nephew. From there, your ultimate goal is up to you. You can try to sneak your nephew out or leave him there. Maybe you’ll meet with the cult leaders, or try to dismantle the compound by uncovering dark secrets.

The really interesting part, though, is that the personalities of the preachers are randomized each playthrough. In one game, they may be angry revolutionaries ordering cyanide in bulk and plotting a mass suicide. In another, they may actually be a well-meaning and largely harmless socialist compound that just wants to be left alone to create a better life for their group. 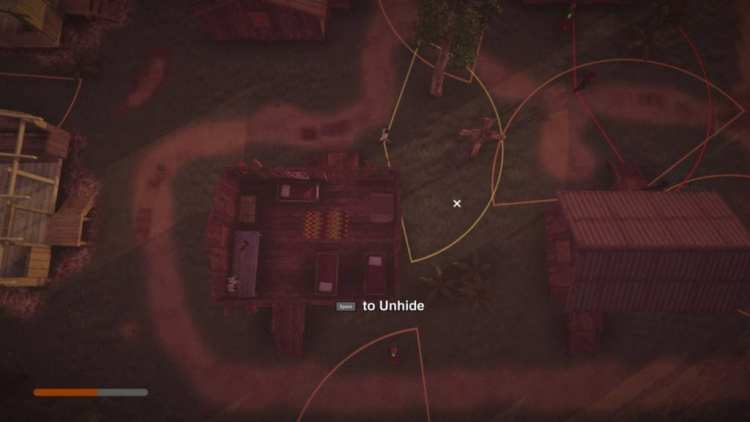 Vision cones vary based on difficulty and are gone completely on the hardest. Either way, though, it takes a moment for people to register your presence and hiding is free escape, so stealth isn’t too tricky.

At the start of each playthrough – which will take maybe 30-60 minutes – you’re plonked onto an edge of Freedom Town, as the compound is ominously named. Armed guards roam the grounds, and every citizen will easily recognize an outsider. There are a few people within who won’t shoot or raise the alarm on sight, and ideally, you need to track them down and have them help you figure out where your nephew is and what’s going on.

While the map itself is fixed, everything else in The Church in the Darkness is randomized. The locations of helpful characters – and which helpful characters are even present – differ. Your nephew’s eventual location is different in each game. And, on a smaller scale, whether a chest will contain a sandwich or a gun changes every time you start a game.

All of this gives a really strong initial impression. You’re sneaking through a (probably?) unfriendly jungle compound, killing or incapacitating guards and disabling alarms. You need to find items and uncover the (unpleasant?) details of what’s going on behind the scenes. You’re also helping out friendly characters, who in turn will help you find your nephew. And then, if you so desire, you might meet with the (insane?) preachers before determining the fate of Freedom Town. Whether you ignore or remove one or both of the leaders, rescue or leave behind your nephew, and a few other decisions? Entirely up to you. 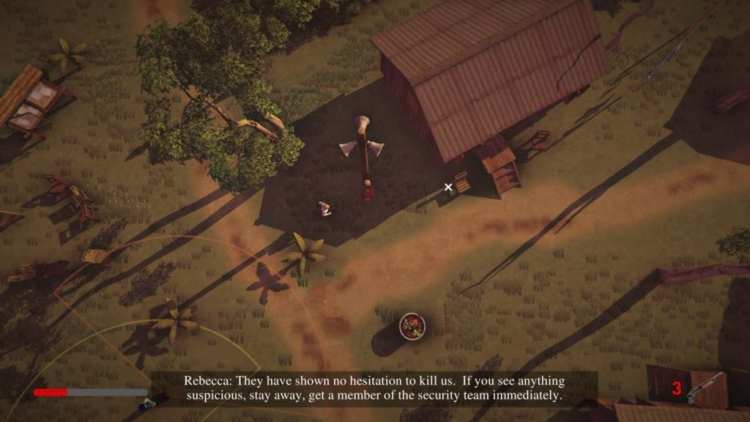 The gradual shift of the game from day to night as you complete “chapters” by triggering events is a neat visual touch.

Where things start to fall apart is after the first couple of plays. Once you know the cues, you can tell within minutes what personalities the preachers have. You can’t skip the inevitable dialogue with the helper NPCs so you’ll usually want them to just shut up and mark the next location on your map. Instead, they’ll talk about how they miss their kids, and that dialogue doesn’t change at all from game to game.

The Church in the Darkness feels a bit like a single Hitman level, albeit from a top-down perspective and with simpler AI. There are all sorts of possibilities (with more unlocking as you complete playthroughs) but it’s still within a limited and fixed region, and every playthrough follows most of the same beats. You go find the initial friendly contact. They point you to a second, who tells you where your nephew is. Then he’ll tell you where the preachers are, and you can decide the finale for yourself.

There’s some scope for doing things differently throughout this, but not a huge amount. You can murder your way through the camp or try to ghost your way through, and whether you decide to solve the sidequests for the friendly NPCs is also up to you.

Even then, though, that’s not a very interesting experience after the first few times. The “plot” items needed by the NPCs are in guarded white chapels and there are no clues as to which chapels matter, so if you want to assist them you roam the map checking every chapel you find. Again: it’s interesting for the first few times, but repetitious after that. It’s also occasionally nonsensical. One character asked me for proof that there was something untoward going on in the camp, which I solved by… handing over a card with a picture of a preacher on? Alright then.

She Sells Sanctuary, in some playthroughs 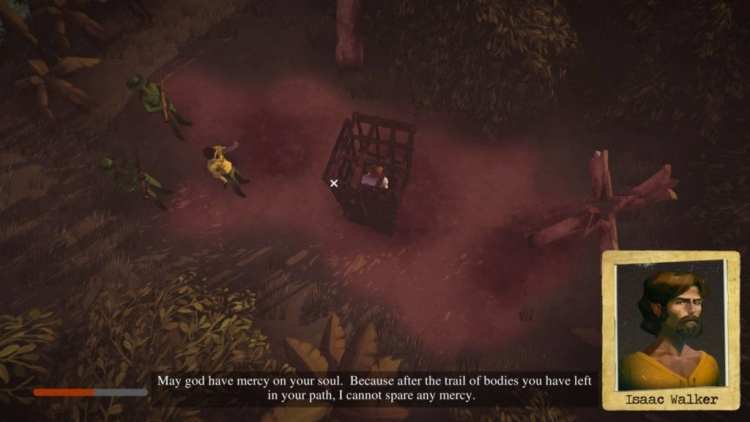 What is very cool is the reactivity of the game. Again, it’s not something that holds up too well over a few dozen playthroughs, but there are some very neat touches in The Church in the Darkness. Getting incapacitated results in your being locked in a cage and then getting a talking to from one of the preachers… usually. It’s almost like a lives counter: you can get “caught” a few times before it’s game over. But if you’ve murdered seventeen people and set off a bunch of alarms, they may just decide to execute you on the spot instead. In one game, in fact, one of the preachers very definitely used me to push their own agenda, which I didn’t see coming at all.

There are a lot of little touches like this. The constant speeches droning over the camp speakers vary depending on the personality of the preachers and your actions. In fact, plenty changes: you might find people being stoned, and messages laid out in sticks change from game to game. There are plenty of hidden paths and locations, and exploration is a joy.

But when once you’re familiar with Freedom Town, you’re left with a slightly clunky top-down stealth game with mildly crap AI. Guards can’t hear you, so you can sprint everywhere, and they’ll lose interest a few seconds after you drop out of sight. They’ll never check hiding places and you can start the animation to duck into one even if they’ll round the corner within half a second. Not only that, but they will react to thrown rocks so they’re easy to distract. Although I wish you could aim the rocks rather than just lobbing them in the direction you’re facing.

Not so Hidden City 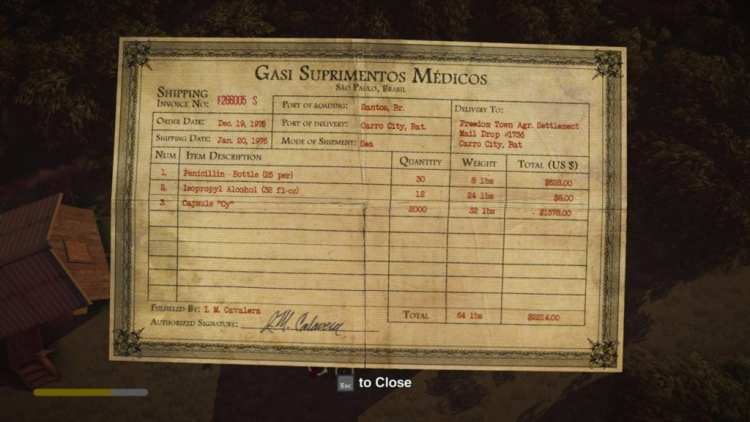 I see no problem with this medical order.

The real challenge arises if you’re trying to do something for yourself – a ghost run, say, or aiming for a specific ending. There’s also the incredibly difficult Mole difficulty where a single shot downs you, guards are more numerous and more heavily armed, and you have no vision cones. The top-down perspective and stylistic designs make this more frustrating than challenging, though, because it’s often hard to tell what direction a person is facing.

The Church in the Darkness tries to fix some of the repetition by introducing new mechanics when you reach new endings. Disguises, new weapons and items, new friendly NPCs, and some changes to the mechanics are drip-fed to you with subsequent playthroughs, but they aren’t enough to really vary things up. Especially considering it’s entirely random whether or not you’ll encounter them on any given run.

Which, in the end, left me feeling a bit disappointed. After reaching three or four endings, the repetition left me with no real desire to go and play more. Some of these issues aren’t beyond fixing: the ability to skip dialogue would be a huge boon, for starters.

You’ll enjoy The Church in the Darkness for a few hours, for sure. The setting, tone, and varying nature of the game makes the initial plays interesting and incredibly uncertain. Once you know what to look for, though, you’re left with a pretty bare-bones stealth game with some ambitious ideas that only really hold up for a short period of time.

The Church in the Darkness

While I can't call The Church in the Darkness bad, it's a disappointingly limited experience. Once the excellent setting and the randomization wear off you're left with a clunky top-down stealth game.