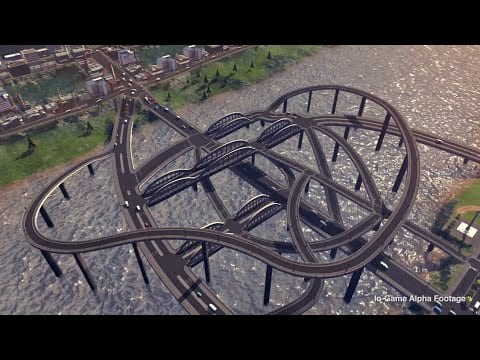 A city builder with actual space on the map. Imagine that.

Perhaps the most surprisingly reveal of Paradox’s Gamescom event was Cities: Skylines, an old school city builder from Colossal Order. They’re the developers behind the Cities in Motion series and their new game seems, somewhat, to be the antidote to Maxis’ most recent effort with SimCity.

Here’s what I wrote down from Paradox CEO Fred Wester’s little on-stage talk about the game. The map is 36 square kilometers in size. Cities: Skylines will have full, integrated mod support from the very first day of release. You can play the game entirely offline if you wish (that bit is actually in the trailer, below.) It was described as a no nonsense city builder, “like they used to be.”

So, definitely not trying to target the audience who were annoyed by SimCity’s tiny city sizes, lack of mods and always-online DRM nonsense. Not at all.

Here’s a more extensive features list from the official site.

And here’s that first trailer. Cities: Skylines is due in 2015 for PC, Mac and Linux.

Crusader Kings 2’s next DLC is all about Charlemagne