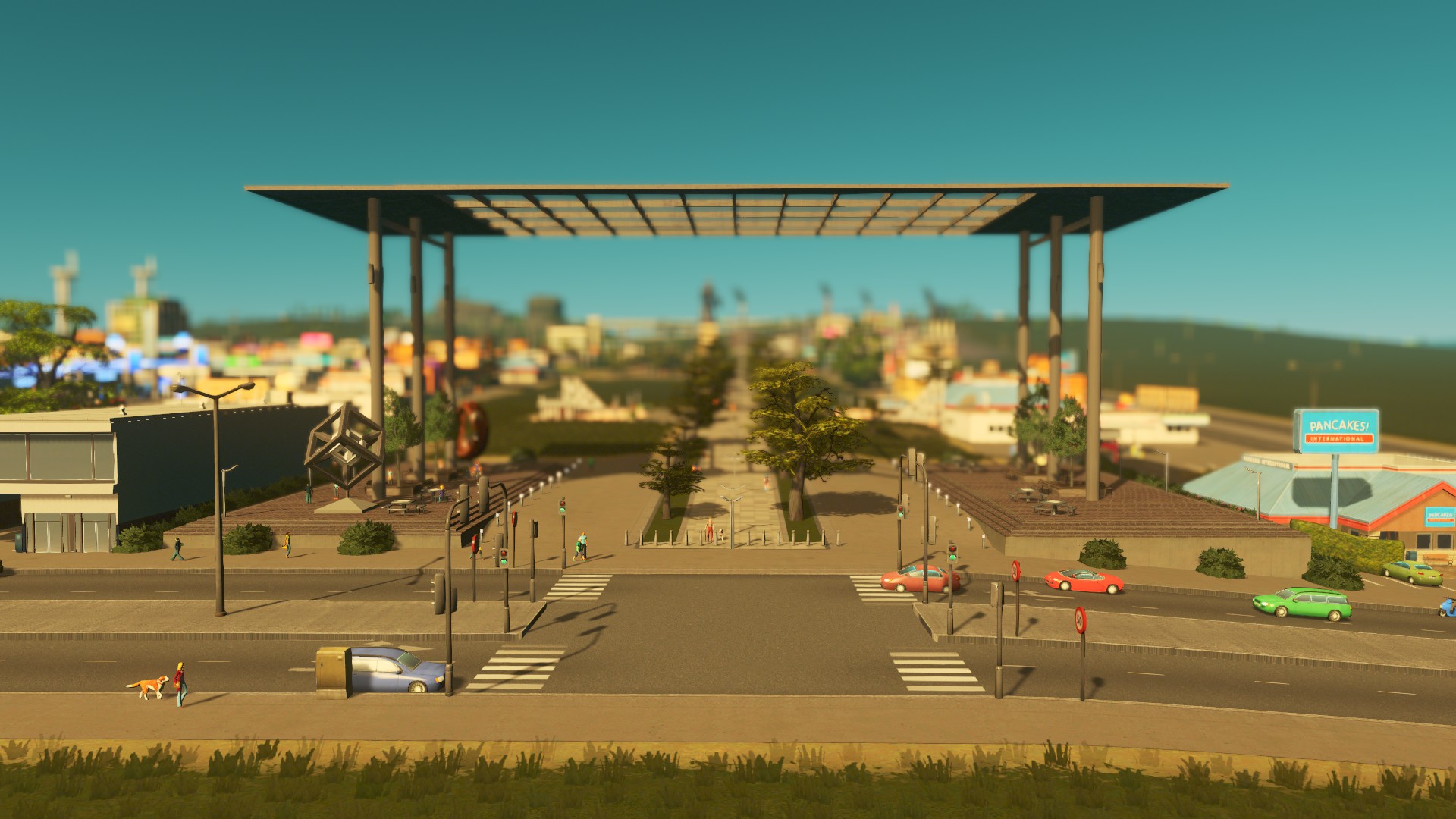 Colossal Order hardly seems like it’s running out of ideas when it comes to outfitting Cities: Skylines with new attributes for players to enjoy. Thus, here we are with the city builder’s 11th major expansion in the seven years since it has been on the market. Today, the Cities: Skylines – Plazas & Promenades expansion released with a new focus.

This time around, the focus is less on the cities and more on the citizens. This expansion introduces many new tools, fixtures, and buildings that are centered around increasing the well being of townsfolk by means of giving them more space to roam and enjoy themselves. This shakes up the gameplay aspects to a decent degree, as you’re now encouraged to plan around incorporating these new citizen-focused areas into the city’s design. In my time with the expansion, I can certainly see its potential, but honing that potential takes some coffee, plotting, and brainpower.

As established, the purpose of Plaza & Promenades is to incorporate more citizen-focused areas into your city. This includes shopping areas, walking paths, outdoor amenities (food truck parks, basketball courts, and large gardens, just to name a few), and even people-only streets. On an existing map, depending on the layout of your city, incorporating such areas may not be that difficult. However, I opted to simply start from scratch in order to make things easier for myself. 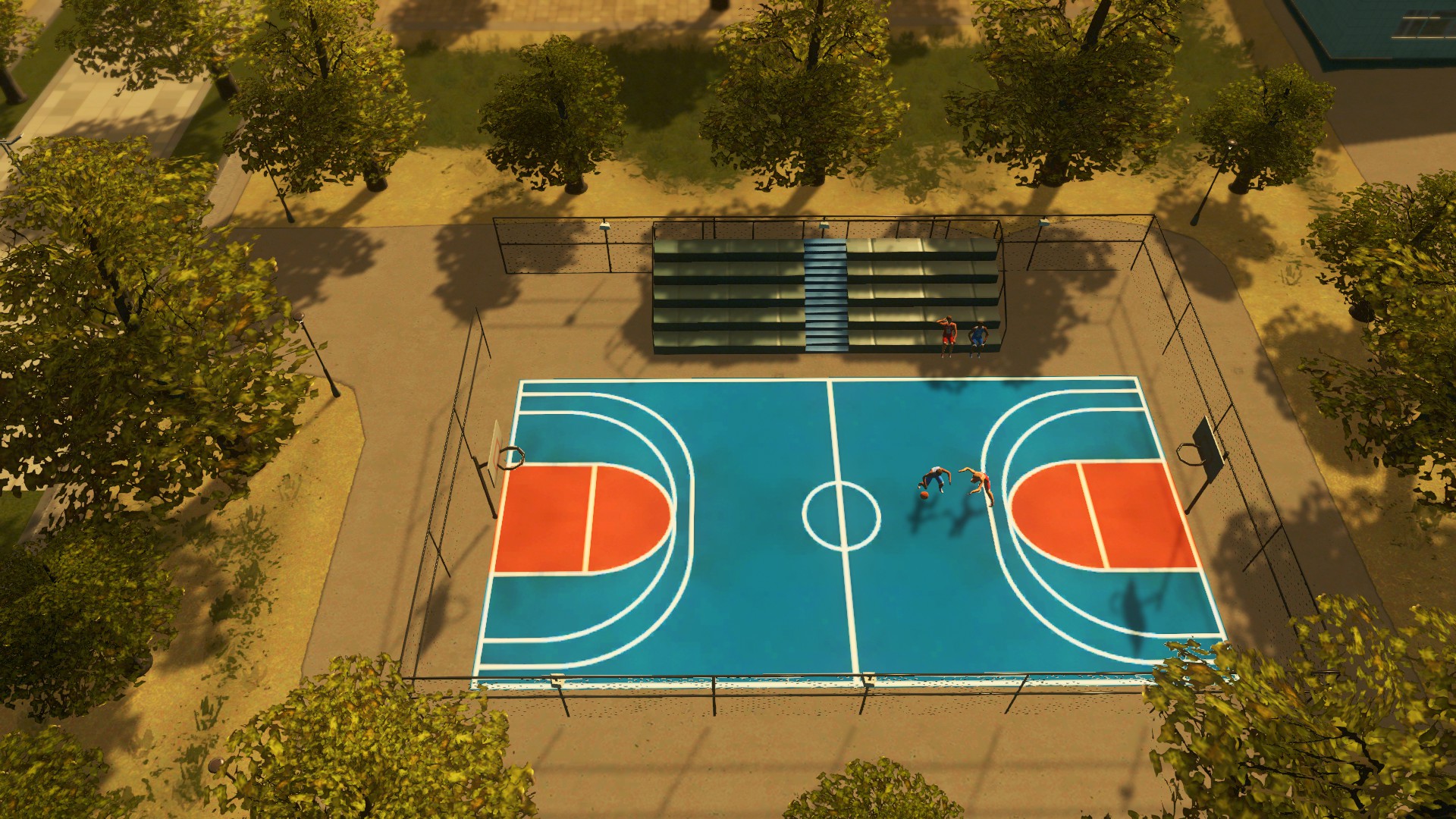 You’ll need to achieve a population of a few thousand before you can start implementing these features, so if you do decide to start from scratch, planning ahead is essential. Otherwise, you’ll probably find yourself ripping up an area to make way for the new citizen-focused districts. Having said that, you will have to use the district tool to designate desired citizen areas in order to make use of the new implements. This will also allow you to introduce new policies, which are citizen-focused as well.

For instance, one policy bans sugar in order to help improve the health of the population. But at the same time, it bumps up the crime percentage, as folks try to smuggle candy bars in, effectively classifying the candy as contraband.

Once you have your area planned and designated, then you go to town (no pun intended) with putting down new pathways and patching in new attractions. Whether you want to go for a peaceful park in the middle of a residential area or a nice shopping strip in a business district, the choice is yours. To help add a bit of modern flare to the new setup, buildings have new tiles that add to the aesthetic and give them pops of vibrant color. Some of the floor tiles of the new attractions also feature these designs. 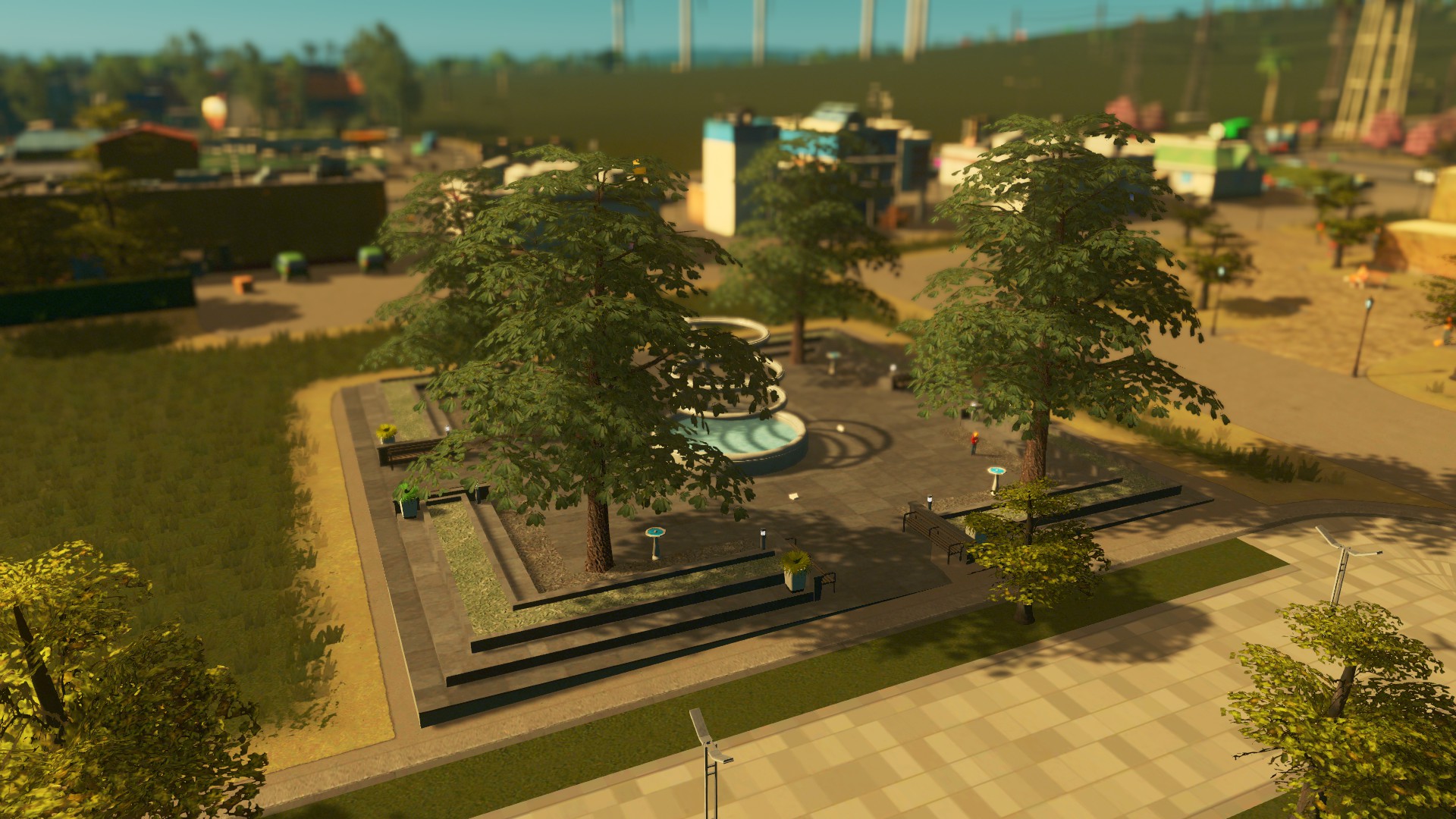 Overall, from a thematic and mechanical standpoint, the Plazas & Promenades expansion for Cities: Skylines includes a lot of tools and toys to really help flesh out your city in new ways. However,  as with basically everything else in Cities: Skylines, real strategy is also essential.

Cities constantly encourages you to plan out how you’re going to integrate new fixtures into your settlement. The new tools in the Plazas & Promenades expansion are no different.

There are a lot of elements to consider. For example, will placing a new walking-only street in the heart of town interrupt your traffic flow? Or is there enough transportation options for tourists and residents to get to a new spot if it’s a ways away from the action? 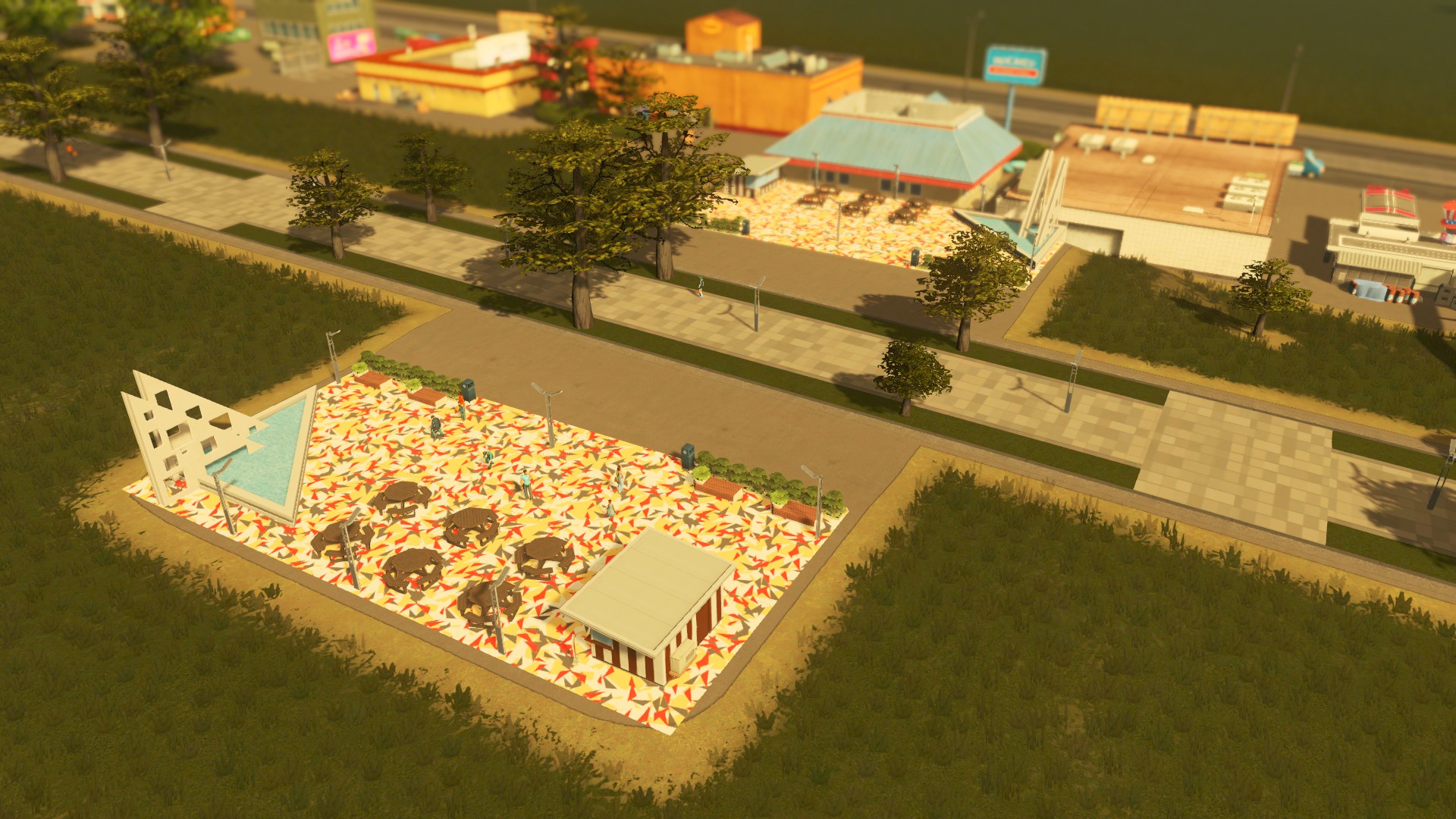 These new green spaces certainly add to the ambience of the city, but you have to put them where they make sense. A few clips from an industrial sector is no bueno, as you don’t want the pollution to bring down the value of your new area or cause a health hazard. And, again, you also want to make sure you don’t cause any unnecessary bottlenecks in your traffic network.

Thankfully, there are some official video tutorials that will help you with your planning and building. Larger channels like City Planner Plays have prepared their own guides to help beginners really get the most out of this expansion.

Playing this expansion made me feel like I was getting into Cities: Skylines for the first time all over again. That’s mostly due to the fact that I don’t fiddle with it much other than when a new expansion comes around. But, it’s also due to how, as established, all the new features really do make you rethink how you want to plot out a city.

I spent a good chunk of time learning how to integrate the Plaza & Promenades features into my new map and how to create an efficient flow. Add to that the accompanying Mid-Century Modern and Seaside Resorts Content Creator Packs, and there was even more things for me to consider as I set new polices, created new districts, and mapped out new street networks.

I know I’ve barely cracked the surface as to just how flexible the new tools here can be. But I’m actually intrigued by the idea of really testing my mettle and seeing how far my kid brain can take this project. 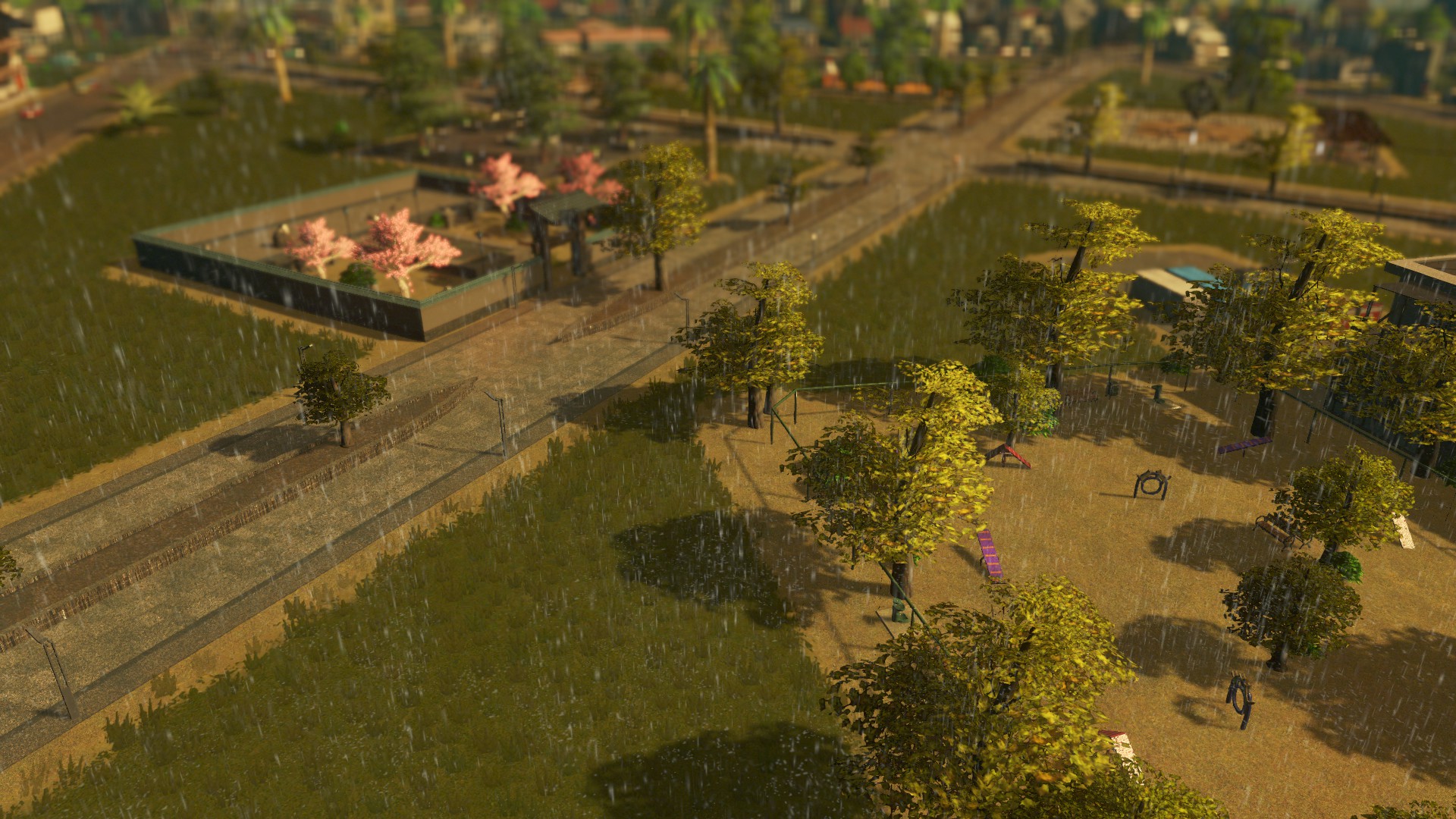 Many modern cities are beginning to incorporate a larger focused on car-free zones, allowing for more walkability. So this expansion is a very neat concept that allows you to mimic such creations in virtual form. It’s certainly the largest shakeup that the sim has seen in several years. Even a Cities novice like myself realizes that. So, as I said in the onset of this piece, to really flesh out its efficiency and the scope of its potential, you’ll need a hardhat and blueprints. Whether that includes also looking at real cities or the creations of others for inspiration, it’s up to you.

It would be nice if there were more activities included, though, such as marathons and bikeathons. But what’s on offer is still leaps and bounds better than the barebones list of activities that Cities: Skylines previously provided.

Nevertheless, the core benefit here truly is how much this expansion changes the experience. I wasn’t too fond of the preceding Airports expansion, andthe Sunset Harbor expansion only works well in coastal maps. Thus, the Plaza & Promenades expansion truly stands out as one of the most universally beneficial packs to the evergreen city building sim yet.