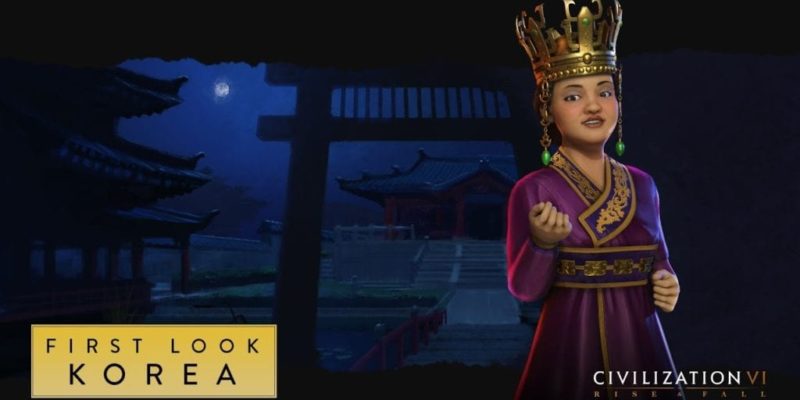 Civilization VI expansion Rise and Fall is on the way next year (Feb 2018), and will add Korea as a new, playable civ. Firaxis have outlined a few details about how Korea will play in this news post, and released a trailer covering similar ground (below).

Queen Seondeok will lead Korea. She was ruler of Silla (later Korea) from 632 to 647 AD, investing heavily in the arts, education, and dedicating herself to policies that would aid the impoverished. At least, that’s what it says in this Firaxis overview. This is all new to me. It also says she further integrated Buddhism into society (it was already the state religion).

Korea get a unique Seowon building, replacing the regular Campus. This has to be built on a hill, and gets a fixed yield of science. For every district you build next to it, however, this yield is reduced. The civ’s ‘Three Kingdoms’ ability means mines and farms built next to the Seowon will produce bonus science and food, respectively.

In Civilization VI: Rise and Fall, Korea’s unique unit is the Hwacha; a mobile ballista that can launch hundreds of arrows at people. It’s a powerful unit, but cannot move and attack in the same turn.

Queen Seondeok herself provides bonuses to science and culture in all cities with a governor. Here’s the trailer.