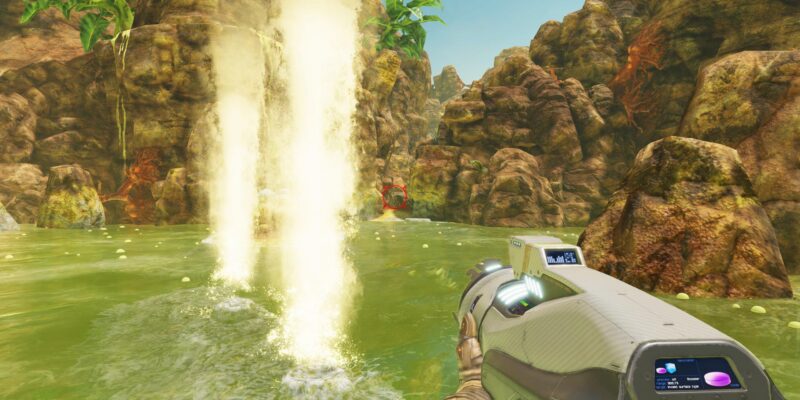 Ever since Portal 2, I’ve developed a love for 3D adventures that feature environmental puzzles and the like. The same can also be said for many of the developers that create games in the genre. There are many new titles clearly inspired by Valve’s hit puzzler. Thinking back in review, this applies to Claire de Lune to an extent, though there’s nothing wrong with that since the game also does its own thing in many ways.

Claire de Lune sets off in a futuristic, yet largely relatable universe where you are a career smuggler, and a dad. You tried to keep your business separate from family over the years, but things finally fell apart. You’re on the run, and you have your daughter Claire with you. However, things quickly go from bad to worse. It’s not long until you find yourself on the surface of an uncharted planet with Claire’s fate largely unknown. I won’t spoil the narrative for you, but let’s just say you find out that she’s in grave danger. Naturally, this is your motivating driver.

You don’t go at it all alone, though. Seeing as this is the future, you have a portable AI named Arturo that’s along for the ride. He provides you with help and suggestions for complex problems, along with regular “fun facts” that are often generally entertaining, as well as typically inappropriate to the situation. He’s frankly a real comedic hoot, and will definitely remind you of the AI from another aforementioned game. However, Arturo also raises some issues. Seeing as the devs sell this as a narrative-heavy game, we’ll get into why later.

You navigate the alien, often hostile, terrain in your quest to reunite with Claire. Your trusty Nanomatter gun helps you do this. It has multiple functions that allow you to manipulate physics and matter. As you’ve surely concluded by now, the Nanogun is what facilitates the platforming and environmental puzzles along the way. This is where the Portal inspiration is also noticeable. So many puzzle games rely on some kind of crazy sci-fi device to induce changes upon the world. However, you’ll find the functions of the Nanogun are different. You can create a block, bounce pad, gravity attractor, and gravity propeller with it.

You don’t get access to these mechanics all at once, though. You’ll need to work your way through the world to find the upgrades, and that’s how the devs attempt to create additional level complexity later on. This approach to level design works alright. In theory, it should build up to the best parts of the game. However, it feels like the platforming in Claire de Lune plateaus early on and then actually goes downhill at times later on. Claire de Lune is a difficult game during the platforming segments, but not for the right reasons.

The Nanogun is often clunky to use, because some of the places you need to target are unnecessarily precise. You can even encounter large sections where there’s seemingly nothing to target. You end up doing these really awkward jumps onto tiny ledges that are often next to other rock outcroppings that subsequently get in your way. Jumps also need to be perfectly timed to make use of the very limited selection of Nanomatter options you have at your disposal. You can only deploy one effect of each type, which makes certain sections feel repetitive very quickly. It also means there’s usually only one correct way to navigate a section unless you find a way to break the game. It’s not automatically a bad thing that there are only single ways to do multiple segments, but the design is simply not fun at times because of all of the intentionally blocked off options. 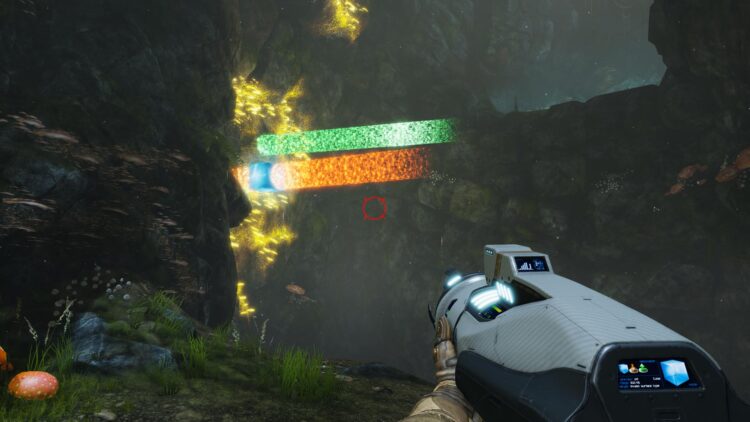 Crossing this chasm was not easy. And it gets worse.

With that said, it can be really fun to do some of the challenging routes, but one great section is often followed by something frustrating and poorly designed. It has a way of killing your momentum, as you’ll spend minutes staring at walls, hoping there’s some better way to go about the section, only to find that there isn’t. Instead, you must make quite a few very specific and awkward jumps. Simply put, you’ll fall to your death a lot as you make mistakes and try to figure out what the hell you’re supposed to do. At least the checkpoints are forgiving, and the load times fast.

Time to use your brain differently

Aside from all that, there’s also a large variety of menu puzzles you’ll need to solve along the way. These include decoding secret messages, identifying correlations and patterns, and some good ‘ole maths. The latter of which I’m awful at. Yet, even I was able to deal with that. The skill level required for many of these isn’t all that high. Those that are a bit more of a challenge also feel quite fun as well. Hats off to the developers on these, even if there are perhaps a few too many menu puzzles that slow down the story’s pacing at times.

Plenty of sights to see, some good sounds to hear

Some puzzle games suffer in variety due to limited resources that result in similar looking environments throughout the entire experience, along with rehashed elements and mechanics. Claire de Lune is actually quite good about avoiding these issues. Most of the levels are visually unique and detailed. This really helps to make the story more immersive and give you the sense that you’re going somewhere.

You’ll also encounter different creatures and hostile plant life along the way. Straight from the get-go, you’ll run into some crazy spiders that should please you if you’re a fan of Xenomorphs. You’ll also come across murderous spike plants. There are the occasional friendly birds, but you’ll definitely want to avoid “The Beast.” You’ll know what I’m talking about once you see it. Trust me.

The sound effects in the game are also pretty good. The voice acting is exceptional, particularly Arturo’s voice. Seeing as Claire de Lune is named after an iconic song, you’ll hear that at one point as well. The rest of the soundtrack is mostly geared towards a sci-fi tone. It’s a little generic, but it gets the job done and is certainly enjoyable to listen to.

Overall, Claire de Lune does an impressive job in these areas given its small team and likely also small budget. 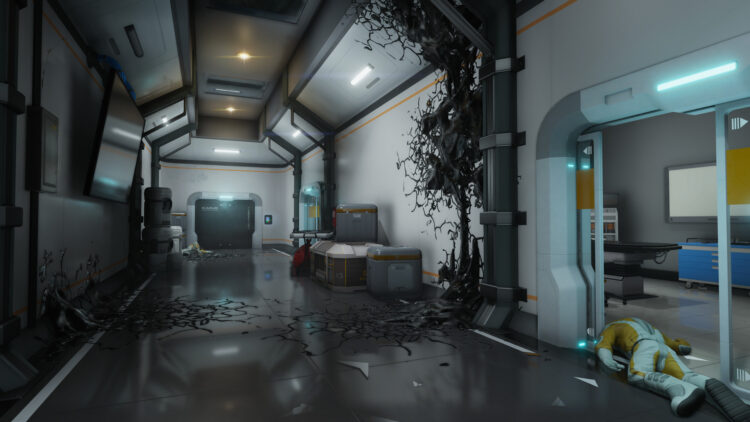 If you like to learn about the technical challenges that game developers must overcome to put their games in your hands, you’ll be impressed to know that the four person team Tactic Studios built its own engine for Claire de Lune. Many indie studios can’t say that. The Immortal Engine works well enough overall, but the game still has some performance issues. Textures exbibit some odd ripple effects when you slowly pan the camera, but these are largely ignorable.

The main problem is that certain levels stutter a good bit, even though all of my hardware exceeds the recommended specs. Even the RTX 3060 struggles at maintaining 60 fps in 4K with medium and low settings. It appears the issues are with the game itself, though, because many of the stutters are still present in sections even when I dropped down to 1440p and reduced GPU load to around 62%. Likewise, the i7-7700K only ran at about 50% load. It doesn’t appear that my core/thread count is an issue either, as only the i7-6700 is required to meet the recommended spec.

That aside, I did encounter multiple game breaking bugs. There were no crashes to report, but I did have to reload several sections where the puzzles were just… wrong. One number sequence puzzle loaded the wrong info, and I spent a good 20 minutes trying to big brain it. Eventually, I gave up. Upon returning the next day, the new sequence was ridiculously easy. This leads me to believe that I didn’t get the correct sequence the first time, as that puzzle looked impossible to solve. There were also some mechanics that failed to perform as intended. One such case was when a cube failed to attach to a gravity attractor. I couldn’t destroy a security camera, but after reloading, the same trick I used before worked fine. I also discovered that it’s easy to trick “The Beast” and make it fall into pits. And don’t get me started about how every tablet in the game only displayed half of the messages on the screens. 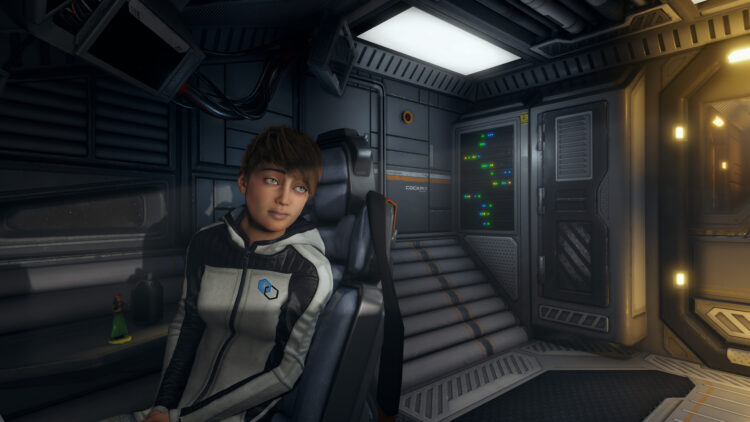 Claire’s pretty chill. She obviously gets it from her dad.

Oh to be a dad

Now let’s talk about the end of the game without talking about the end of the game. I’d hate to hit you with some spoilers, as there is actually a lot to like about Claire de Lune despite its faults. As I already mentioned, your goal is to find your daughter Claire. You actually find out in the earlier part of the game that something pretty terrible has happened to her. You’d think that as a parent this would be pretty devastating. However, Arturo and John just can’t help themselves from making endless jokes and taking things half-serious for most of the way.

The game doesn’t necessarily need to be more serious, as that would be a drag. But it’s hard to ignore how wildly inappropriate the tone is given the situation. This begs the question of whether Claire needed to be in danger in the first place. The developers should have approached the protagonist’s motivations and setup differently, because what we get is pretty unbelievable. There are some interesting developments and a twist near the end of the story, but the ending could have been so much better, both in terms of gameplay and the narrative climax.

If you give this game a go, this criticism will make clear sense to you once you process what happens. This game has some beautiful and emotionally intense scenes that some are sure to love, but these moments don’t congregate into an overall tale that’s worthy of overall acclaim. It’s also difficult to justify the $40 USD price tag of Claire de Lune, as it’s basically in AAA game price territory. This one’s probably best enjoyed after the devs have time to patch it up and put it on a sale.

Claire de Lune is a game that definitely has its enjoyable parts, but the heavily-advertised narrative is problematic and many of the platforming sections are downright disappointing. If the price wasn't so steep, this would be an easier sell to those who like challenging puzzle adventure games. All of this along with the bugs and lingering performance issues make it hard to recommend.