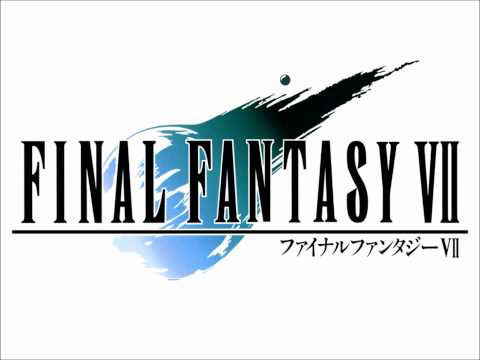 PC users haven’t had much luck with the Final Fantasy series. I can’t say I consider Final Fantasy XI a “proper” Final Fantasy title, being that it’s an MMO, but aside from that we’ve only really had Final Fantasy VII and Final Fantasy VIII. The former such a broken PC release that I know exactly one person who had a specific enough hardware configuration that he got it to work as intended, while the latter is just a bloody awful game.

So this Steam re-release (and last year’s re-release on Square Enix’s own digital store) is of some importance for those who still think fondly of Final Fantasy VII. It’s an opportunity to play it again on a system that supports every controller known to man, makes screenshots and videos easy, and which won’t have backwards compatibility problems in a year’s time.

On the one hand, Cloud looks a bit sharper than before. And I’m not talking about his hair.

Better still, this is a slightly updated re-release: in addition to getting Final Fantasy VII, we’re promised achievements, cloud saves, a “character booster”, and enough PC optimisations that the game will “support the latest hardware and Windows Operating Systems.” Not bad. But how well do these features work, and how much of a difference do they make?

Before we begin, I should point out that, yes, this article is about a year late because it could’ve just as easily have been applied to the original Squenix store release. The reason it didn’t appear then is because, um, I forgot, and by the time I got around to it, it was a bit late. Considering that FF7 shot up Steam’s top seller list shortly after it was released, though, I’m going to guess that there are a fair few people who’ve just picked it up now and – more than likely – a few waiting to do so. So yeah, there’s maybe still some relevance here.

Let’s tackle the PC optimisation first (because if the game doesn’t work, there’s no point in looking at the rest) and then move through the rest of the list in its original order. Good news, everyone! It works.

This was back when Final Fantasy games still had minigames, of course. And world maps. And secret characters. And secret areas. And…

That’s not to say it’s without problems. There are reportedly issues with a few anti-virus programs (McAfee, in particular) giving false positives and I’m told it crashes pretty regularly on Windows 8, but it’s a hell of a lot less problematic than the original PC release. By which I mean it should actually work on most PCs, which is something I can’t really say about the first time it popped up on PC.

So, if all you want is to play FF7 on PC, rejoice! This will let you do exactly that without too many issues.

Next up: achievements. Not too much to say about these, except “oh look, there are achievements.” They’re pretty bog-standard, tracking your progress through the game and whether you beat the secret bosses, find final Limit Breaks and the Knights of the Round materia, etc. It would’ve been nice to see some encouraging different styles of play or unique challenges (beat Midgar Zolom before entering Kalm, say) but I’m pretty used to lazy achievements so I’m not going to complain about that too much.

I’m not sure whether an ice elemental like Shiva should be wearing skimpy scraps of cloth like that (because she can’t get cold) or if she should be all dressed up in a nice coat lined with fake fur to keep her warm (because she deals with ice constantly). We need more details on the biology of summons, Square!

Now we come to cloud saves. The theory behind this is that your saves and achievements will automatically sync with the Square Enix servers, and if you ever install the game on a new computer, you’ll instantly have access to them just by logging into your account! Hoorah!

Although, uh, I’ve only actually had it successfully back up my saves once. And… well, let me quote the Steam page: “Uninstalling the game will delete any save files stored locally on your PC. “

So yeah. Unlike basically every other game in the world, uninstalling the game apparently also removes the save files, meaning that you either have to use the (currently broken) cloud saves, or you have to remember to back up your saves before uninstalling. I suspect the cloud saves are broken at the moment due to so many people buying the game on Steam, but it’s still hardly a vindication of the system.

I have genuinely fond memories of the Gold Saucer. And also a lot of memories of frustration at that bloody Battle Arena.

And then, at last, we come to the character booster, which always seemed like a pretty good idea to me. Stuck on a boss? Tired of grinding? Use the character booster to speed your way past! Or, hey, if you’ve already finished the game a bunch of times on other systems and just want to quickly get to particular scenes, you can boost your characters from the get-go and speed through the game. In short, something that would open up the game a lot more.

Yeah, it… doesn’t actually work like I’d hoped. What it offers is a way to instantly – and irreversibly – boost the health and mana of the characters currently in the party to their maximum values, and gives you a huge wodge of money.

Which seems like a missed opportunity. If you’re stuck on a boss, you can either try it again and again until you luck out, grind for more experience, or make the rest of the game a complete cakewalk. You can’t boost yourself one or two levels, or change the values to numbers of your choosing. You can’t temporarily boost yourself and then reset it back a little later on. Would it have really been that hard to do it as a more powerful character editor, rather than one button that breaks the game wide open? Hmm.

Oh yeah, and most side characters are stuck constantly making a :O expression. This is one of the few occasions in the game when that actually makes sense.

It even causes a few extra problems. Battles will still take the same amount of hits, as character stats remain unchanged, but Limit Breaks will happen a lot less frequently (as the Limit bar rises based on percentage of health lost). In short: use the character booster and, while you’re unlikely to die, battles will probably take longer.

Oh, and you can only use the character booster on games that are saved to the cloud. So, right now, this option isn’t exactly functional.

As for the rest of it… well, it’s Final Fantasy VII. Literally, that is what it is: as far as I can tell, very little else has been changed. Models look sharper and there are a few extra shaders, the FMVs appear to have been upscaled slightly, and the music is a little better than the original version’s MIDIs. The Magic Defense stat has a purpose again. Oh, and you can play it in a window.

I actually have a friend who never got past this boss because she never figured out that Cloud was giving bad advice. She genuinely never got more than 15 minutes into the game, figuring it was too hard.

The problem is that there’s a bunch of stuff which hasn’t been changed. The translation hasn’t been touched (barring a few very small bits), which means that Cloud’s early-game advice to “attack while it’s tail’s up [sic]” remains exactly the same. For the uninitiated, attacking the first boss while its tail is up results in a very nasty counter-attack; he’s supposed to say not to attack it.

The music is now in OGG format, but it’s still not as good as the PlayStation original for some reason, and still sounds pretty similar to the MIDIs. Running the game in fullscreen mode tends to result in huge black borders around the sides and bottom of the screen, even on areas where the background size is big enough that it could comfortably display a little more.

Now, I’ll admit that the latter might be a bit of a sizeable hack and seeing more of certain areas might actually break the game, and there would probably be a subset of fans who would complain if even mistranslations like Cloud’s idiot moronface advice were changed. But why does uninstalling remove save games? And why the hell are we still settling for a terrible version of the game’s wonderful music, 15 years later?

Have you noticed the huge black borders at the sides and bottom of the screen in all of these screenshots, by the way?

If you don’t believe me, here’s a link to a YouTube Let’s Play of this PC update, with the timecode set to begin at the Cosmo Canyon theme (minor spoilers, obviously, if you haven’t got that far). Have a listen for 30 seconds or so. Now here’s a link to the Cosmo Canyon theme as it was on PlayStation. Hear the difference, particularly once the main theme kicks in? Ugh.

On the plus side, this is – of course – a PC version, which means that a fair bit of this stuff can be modded (and that link also reckons that the lack of changes may be because of a lack of source code). A bit of exploratory Googling indicates that it’s pretty easy to replace the music if you want to – even going so far as to use one of the piano/orchestral arrangements, if you like – and there are a bunch of different character models that can be used to give the graphics a bit of a boost. Of course, this will apparently lock you out of using cloud saves/achievements/the character booster.

Don’t get me wrong – I’m not saying you shouldn’t buy Final Fantasy VII on PC. It’s still the same game it always was, only this time it actually works; if you want to play Final Fantasy VII on your PC (and I do) then this will absolutely fit the bill. The problem is that it’s the same game it always was: the music is still inferior to the original, typos and mistranslations in the dialogue are still present, and the vaunted changes really don’t change a whole lot, or are significantly worse than you might’ve imagined. That’s a hell of a missed opportunity. Rather than being the definitive version of FF7, this is still inferior to the PlayStation original.

It’s Final Fantasy VII, and for a lot of people that’s enough. I’m not arguing that, and I’m doubtless going to play it through again because I have a nostalgic soft spot for Final Fantasy VII. But as far as ports and updates go, about the only thing it improves on from the original version is that this time it runs well on most PCs.