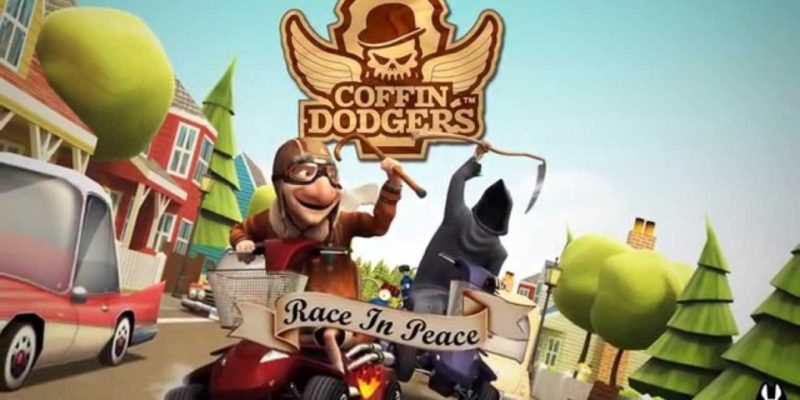 What would you expect from a sleepy little retirement village like Sunny Pines? Nice, little old ladies tending to their gardens, or maybe putt-putting about on mobility scooters? Ha, fat chance! Not in this village.

Apparently, even Mr. Grim Reaper wants to retire – almost. He doesn’t want to chase after souls anymore, he wants to do it from the comfort of his rocking chair. A group of senior citizens refuses to make his job easy, though.

So the senior citizens propose a challenge: “a mobility scooter racing championship to the death. If they can prove themselves to be fast and full of life, surviving and ultimately winning the championship, then he will allow them to live. However, too slow and they will be condemned to the retirement village in the sky.” What Mr. Reaper doesn’t tell them is that he can kill ‘em and bring ’em back as Zombies who’ll be hell-bent on making sure nobody wins.

Coffin Dodgers is Steam’s first open 3D world kart racer, and it’s blazing its way into San Diego Comic-Con 2015. Want to see these grannies kick the Grim Reaper’s ass on some tricked-out scooters? Go look for Alienware at SDCC, they’ll be showcasing the game on their latest hardware.

If you want your own copy of the game, they’re kicking off their launch by offering 20% off if you purchase by the 15th of July. To find out more about Coffin Dodgers, you can check out their website.

The Escapists The Walking Dead is a thing

Everspace is a rogue-like space shooter coming to Kickstarter