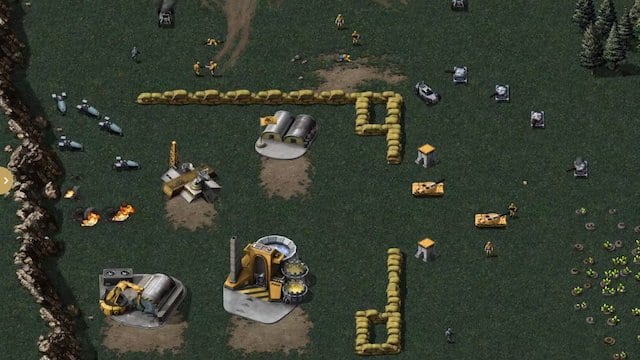 Despite the other games it’s currently hyping, Electronic Arts hasn’t forgotten about the Command and Conquer crowd. Today, the publisher posted an update about Command & Conquer Remastered, currently in development at Petroglyph Games and Lemon Sky Studios — along with some gameplay footage. And though it’s still a ways from release, it does look promising.

First off, there’s a new gameplay trailer. Though it’s only about 30 seconds in length, it does provide a glimpse at the team’s work. It shows off some older footage at first, but then cleans up the graphics pretty nicely with better vehicle renders.

In addition, EA’s Jim Vessella explained why the team went with a traditional 2D design of the game instead of 3D. Vessella said “our plan is to remaster (not remake) the classic games.” That means going with more of an “authentic” approach to “the original feel.” It utilized both Command & Conquer: Tiberian Dawn and Command & Conquer: Red Alert’s source code to get this done.

“We felt the 2D style was the best way to bring all these elements together, and ultimately achieve the authenticity we were looking for,” Vessella explained.

Every gameplay asset has renders redone from scratch, with hard work going into the animations. A painstaking process, to be sure, but worth it.

Petroglyph has also helped the team at Lemon Sky with a new feature: switching between old and new visual styles. “You can tap a single key to smoothly toggle between the original assets at 320 x 200, to the Remastered assets up to 3840 x 2160,” Vessella noted. Players will also have dynamic camera control with the ability to zoom in and out at any time.

More details on this process are available on the official Command & Conquer web page.