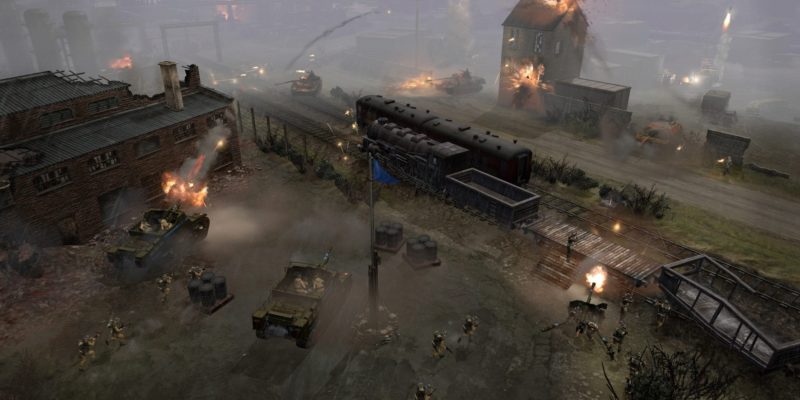 If you’re missing a few bits from your CoH collection, or feel like now is the time to dive in and own the entire series, this is a pretty good opportunity. For $10 USD, you can own what appears to be everything from both the original game and its sequel (including expansions, extra armies and so on).

At the low end, paying more than $1 USD will get you Company of Heroes, plus the expansions Opposing Fronts and Tales of Valor. Plus the Oberkommando West army for Company of Heroes 2’s multiplayer (which will allow you to play online as that force).

Go over the average (about $7 USD at the time of writing) and you can get the sequel, some mission packs, the US Forces army for multiplayer, and the sequel’s soundtrack. And, as mentioned, if you up that to over $10 USD, then you get all the rest: British Forces for Company of Heroes 2, the Ardennes Assault single player expansion, and a few more goodies.

If you really feel like pushing the boat out, going over $30 USD will add an exclusive CoH t-shirt to the set. As always with Humble, it’s up to you how to distribute your contribution between developer/publisher, Humble themselves, and various charity options.

All game items in this bundle will be redeemed through Steam. Be aware of the note which states: “Keys in this bundle are packaged together by tier and cannot be separated. Redeeming packaged keys on Steam will not produce Steam gifts for items already in your library.”

World of Warcraft subscriber hit 10.1 million thanks to Legion – Updated